New Building of Faculty of Psychology 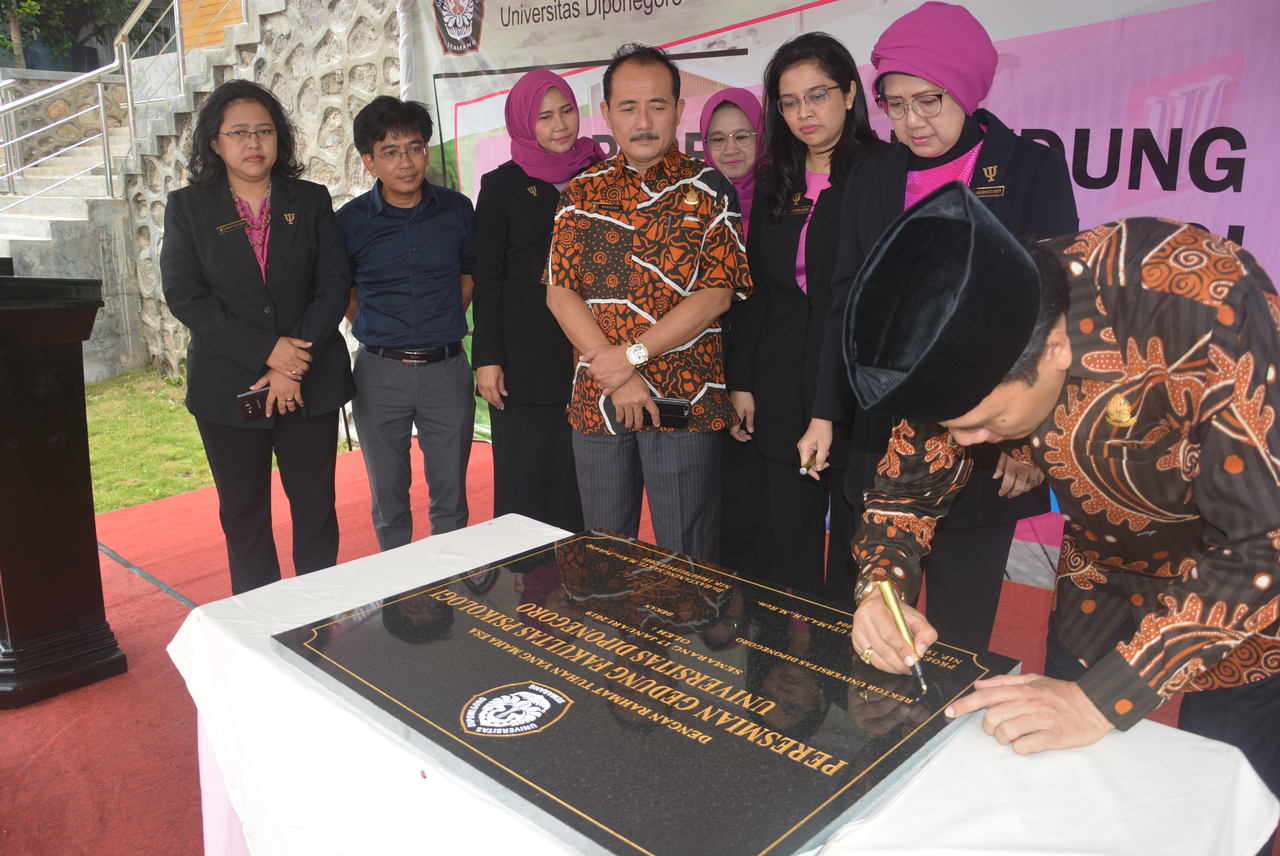 The Rector of Diponegoro University, Prof. Dr. Yos Johan Utama, SH. M.Hum, have inaugurated the new building for the Faculty of Psychology of Undip, at the Undip Tembalang campus on Thursday (1/17).The inauguration was symbolically marked by thesigning of the inscription by the Rector and Dean of Psychology, Dr. Hastaning Sakti,
M.Kes.Psi, then continued with the cutting of flower ribbon by Mrs. Darmanto Jatman, as the late wife of Prof. Darmanto Jatman, one of the Psychology Professors who founded the Faculty of Psychology.

The Undip Rector hopes that this new building will be an encouragement for the Faculty of Psychology to remain optimistic, further improving both physical and non-physical performance.&quot;This new building is one of the forms of development of the Faculty of Psychology that started from a dream, and that dream finally came true, I am certain that this will become a stimulus for Undip to keep improving, especially in terms of the quality of education and prosperity,&quot; said Prof. Yos.

The location of the new faculty building is behind the Undip’s Widya Puraya library or southwest of the Faculty of Economics and Business (FEB).The building construction coordinator, Herry Suliantoro said that the 54 meters tall and 8 story building was built from September 29, 2017 to September 13, 2018, costing Rp. 47.6 B from the budget ceiling of Rp. 53 B.Currently, there building used approximately 7500 m2 (of the total building area of
approximately 17,000 m2) and the remainder is for the second phase.

“This building is able to accommodate faculty needs full with facilities for the next 20 years. This is the first building
in Undip designed with planning that considers green building aspects, “said Herry, who is also a lecturer at the Undip’sFaculty of Engineering.

Meanwhile, the Dean of the Undip Faculty of Psychology, Dr. Hastaning Sakti, M.Kes.Psi in his speech expressed his happiness for successfully brings the faculty to occupy the new building before his period was over. Hastaning claims that the new building that named “Magenta” (following the faculty’s flag color) is currently the tallest buildings on the Tembalang Campus, at an altitude of 350 asl with a beautiful view overlooking the Java sea.

“Why should it face the sea?This was the request from senior and the initiator of the establishment of the psychology faculty, one of which is Prof. Darmanto Jatman (late), who thought that the psychology faculty should be faced towards the sea. The philosophy of the sea in Hasta Brata means wide and deep. It means broad knowledge of psychology and depth in analyzing the soul. We, as successors, try to realize those hopes and dreams, “Hastaning Sakti said.Undip transpersonal psychology expert also said that this building was built with the concept of being environmentally friendly and diffable friendly by prioritizing safety building with ergonomic lifts and stairs, thus it was expected to become Undip’s First Bioclimatic and Biophilic Green Building.

“The Magenta building also functions as a lecture hall with its infrastructure, as well as a Undip location marker, because when the building is viewed from the beach or plane, the Magenta building will appear as the tallest and stands out showingthe Undip logo and the Trisula symbol of the Faculty of Psychology,” he promoted.
(Humas)