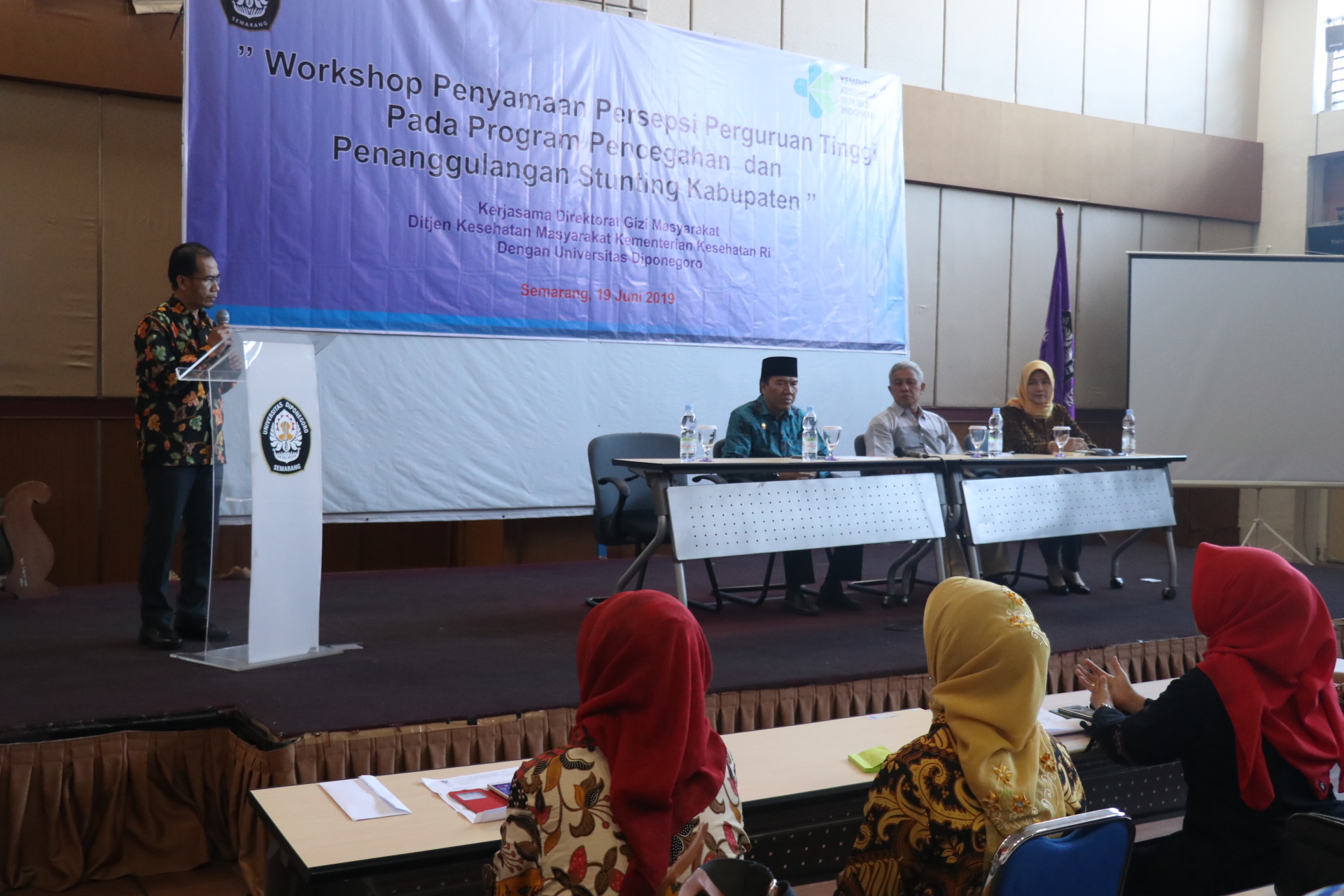 To overcome stunting, it should be necessary to involve various sectors that cannot be seen from the health sector alone. This was disclosed by the Dean of the Faculty of Public Health, Diponegoro University, Dr. Budiyono in its Universitys Equalization of Perception Workshop with a purpose of controlling and preventing stunting. The workshop was held Wednesday (6/19) at the ICT Building Undip Tembalang. This workshop is a collaboration between Undip and the Directorate of Community Nutrition, Directorate General of Public Health, Ministry of Health of the Republic of Indonesia.

Dr. Budiyono revealed that Faculty of Public Health of Undip itself had done a number of things in dealing with stunting.Such as by performing a research, accompanying pregnant women until the child was born.Faculty of Public Health of Undip is currently conducting assistance in Demak district, which previously was in the district of Brebes. Just as the nutrition issues, this stunting problem are being managed by collaborating with the regional sectors.From the planning to the implementation and the evaluation also includes the monitoring ofbuilding capacitybythe staffs related with nutrition, diet and also environmental factors related to stunting. This, as revealed in our study of the dangers of pesticides against stunting, proved quite influential.
“In addition to health factors, cultures may also has it role, for example, pregnant women usually have some kind of taboos to not eat certain foods and it might actually cause a lack of nutrition for the baby conceived. Apart from that there is a current trend that young women to maintain body image by maintaining certain eating patterns, so that they are able to keep their bodyweight ideals. If, until marriage, the women (that is undergoing to motherhood) did not know on what they supposed to eat, it will lead to the mother to suffer from malnutrition and it will also affect the fetus, which results for it to become tiny, short, and weighs less than 2.5kg. Not to mention after birth the intake will be lacking. This means that sustainable food is necessary and we need food sectors to create some plans to regulate it. In terms of politics focus on budget managing. The Public Works sector, for example, requires sanitation facilities and the like, and in terms of the economy to manage quality of life, and increase purchasing power, “he said.
“Stunting treatment from the health sector alone is not enough. Thus, we need to involve many sectors. From Undip itself, we are dealing with stunting issues from various disciplines. There are things called village funds in the village, that fund must be involved in stunting treatment, and we will offer an assist in making the process. At the village level, and especially at the district level is very important in order to fund the health sectors. For this reason, in this workshop that collaborates with the Ministry of Health of the Republic of Indonesia, we invited various faculties to be able to equalize our perceptions, so that when we are conducting research and community service regarding stunting issues, we can complement each other, said the Dean of Undip FKM.
Undips Rector, Prof. Yos Johan Utama, said that stunting is a national problem. Thus, all sectors are needed to be involved in it.Undip itself had involved all faculties to provide the best support in overcoming the nation’s problems.
“Undip itself has allocated 43 billion research funds that can be utilized by researchers, so that it can produce the best solution to overcome stunting,” he said. (RINTU / HUMAS)