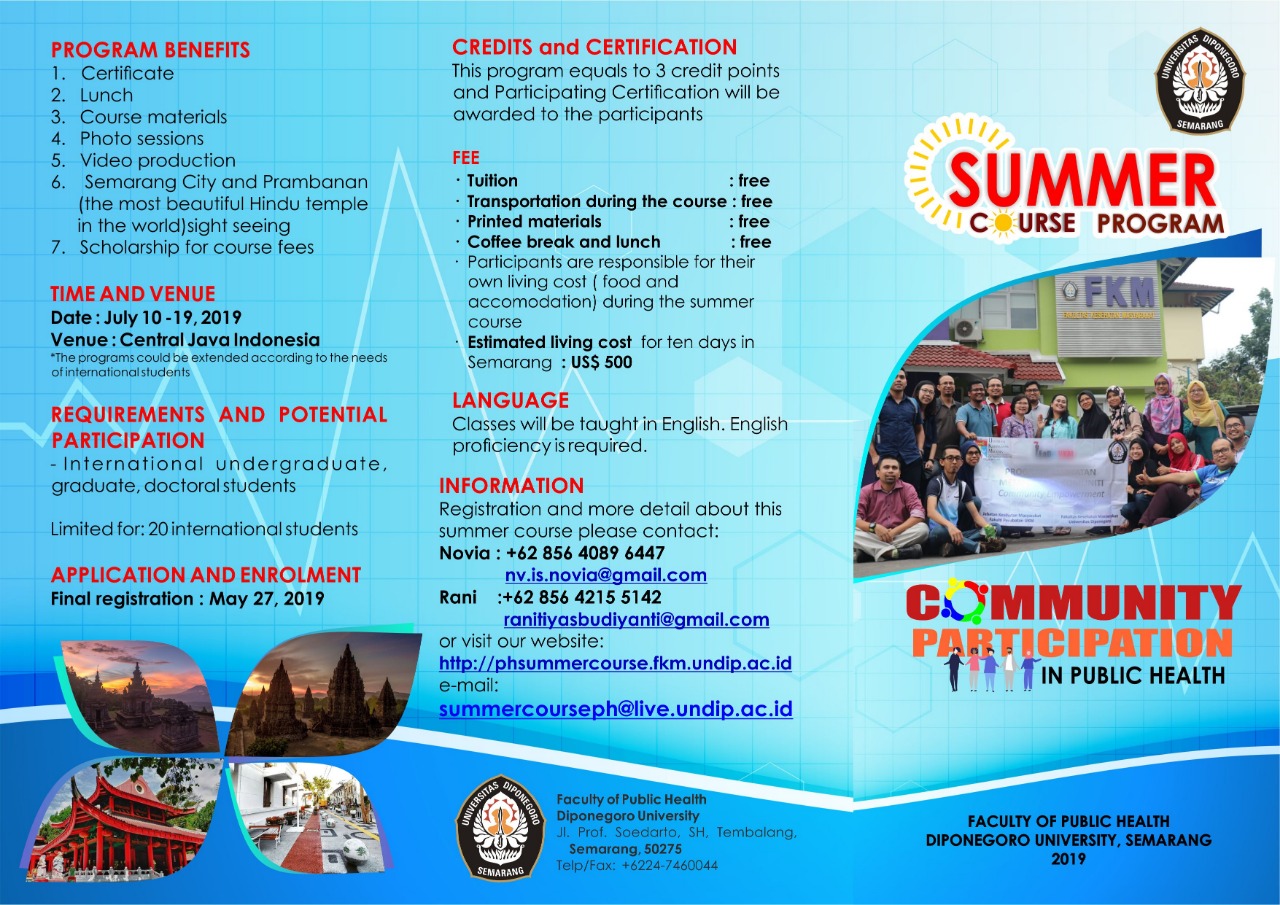 One of the keys to successful public health programs in Indonesia is the involvement and active role of the community. Without community participation, many government programs will be hampered. To introduce them, the UNDIP’s Faculty of Public Health intends to hold a Summer Course Program with the theme Community Participation in Public Health.

The Summer Course program was held for the first time in UNDIP FKM with a target of 15 participants from three countries, both students, lecturers or researchers in the field of public health. Currently there are 16 participants from the US, Germany, Pakistan, Bhutan and Thailand. The activities are scheduled for 10 days from 10 July to 19 July 2019 in order to reach the top 500 world class university rankings. The aim of the event is to bring international lecturers and students to study the science of community participation in public health in FKM UNDIP, expanding the summer course material regarding community participation in public health, fostering a culture of scientific cooperation in a multicultural atmosphere for the academic community and initiate and promotes FKM UNDIP’s internationalization programs.

Various agencies have been involved in this event including the Semarang City Health Office, Rowosari Health Center. Tlogosari Wetan Health Center, Bapelkes, as well as community groups such as the class of pregnant women, posyandu, posbindu and FKK. In addition, waste sorting training will also be carried out at theResik Becik Waste Bank, batik training in the batik village and a visit to Wonolopo’s herbal home industry. Participants are expected to be actively involved in various activities held, including in mosquito’s nest eradication (PSN) activities.

This summer course also holds visits to various tourist attractions, both in the city of Semarang, as well as in the areas of Central Java and Yogyakarta. Various interesting spots in the city of Semarang, including the Kota Lama, Lawang Sewu, Sam Po Kong became three of the destination that cannot be missed. Cultural heritage outside the city such as Prambanan and Keraton Jogja temples will also become a tourist destination to introduce national heritage. It is hoped that this program can continue from year to year with the involvement of an increasing number of participants.