UNDIP Faculty of Law students Researches the Protection of Homeworkers 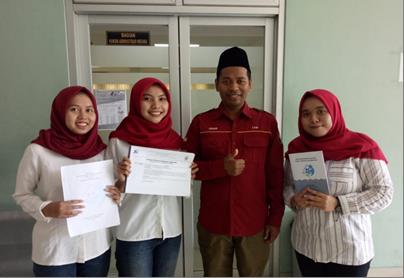 Tri Rahayu Utami, Naila Amrina, and Maimunah have conducted a PKM PSH study on homeworkers in Semarang with the theme “Protection of Home Base Workers Working in a Putting Out System”. The study was conducted for approximately 1 year (2018-2019) and all research activities were funded by the Directorate General of Learning and Student Affairs (DITJEN BELMAWA), the Ministry of Research, and the Technology and Higher Education of the Republic of Indonesia (KEMERISTEKDIKTI RI). This activity was always contested every year. The research was guided by one of the labor law lecturers namely Mr Muhamad Azhar, S.H.LL.M.. The last time the Faculty of Law of Diponegoro University sending its representative to this PKM event was in 2014.

Tri Rahayu Utami, said that the purpose of this study due was the fact that there were around 7300 homeworkers recorded in Central Java. Homeworkers who work in a Putting Out System are those who work under orders by receiving wages or other forms of remuneration employed outside the premises provided by the employer. This is different from other homeworkers such as domestic workers (self-home base workers). According to her, the homeworkers working on the putting out system that they studied were occupying in the field of sewing sandals or shoes, sewing boots, packing charcoal, mbatil, sewing baseball gloves, and working on cardboard cake wrappers. What is surprising from this is that the work is carried out outside the factory aka brought home by those who worker and with very minimal wages.

This is what makes us as students feel the call to find out more deeply, and to question how the rights of workers to work on these jobs. The saddest part that we found in this study was that the wages / rewards for working on export quality shoes and sandals were only Rp. 45,000 for 20 pairs of shoes. The details can be seen in the table as follows. Naila Ambrina as a member of the researcher said that homeworkers were not only wasted in relation to wage provisions, but also the rights of other workers were also ignored. Among other rights that were ignored consist of No written agreement or contract, No social security and job security, Long working hours, Covering the cost of self-production, and The activity is not well organized.

According to her, “we are here to provide a concrete solution on how to actually increase the bargaining power of homeworkers in front of the factory”. “We will be proposing the optimization of village-owned enterprises (BUMDes) as a managerial tool for the activities of homeworkers who worked under the putting out the system”. “In addition to maximizing the BUMDes, we will also try putting an effort in revitalizing the mentoring by third parties, namely NGO (non-governmental organizations) to provide assistance whenever problems arise. According to Maimunah (mai), the results of their study will not just stop on a table or collection of research results, but their research will directly produce outcomes that can be used directly by both Local Governments and Universities to conduct further research related to homeworkers who work under putting out system.

The output of our PKH PSM research is First, a module, a guide for the community or parties who want to assist workers. Our module also has an ISBN as an official document that can be accounted for, and has been uploaded in the UNDIP repository with the link http://eprints.undip.ac.id/73833/. The second output is a national journal and reputable international journal (and has received LoA). National journals contained in administrative law & governance journals Vol. 2 Edition 2 July 2019 https://ejournal2.undip.ac.id/index.php/alj/article/view/5143. Whereas the third output is in the form of Governor’s Draft Regulation (Rapergub), which have been compiled after carrying out hearings and outreach to Provincial Government Institutions, District Governments and YUSANTI NGO. The fourth output is the success in compiling a book log to become a popular book entitled “Student Research Note”. this book contains the ups and downs of beginner researchers in conducting field research in the field of law. said the student from Bekasi with enthusiasm.

The Dean of the Faculty of Law UNDIP, Professor Dr. Retno Saraswati, S.H., M.Hum while being contacted online expressed its gratitude and pleasure for the PKM PSH activities of UNDIP Faculty of Law students. In fact, next year, it will push other PKM students to not only sending one delegation, but it has to be more than that because according to her this is a very prestigious national event. She prayed for the best in facing PIMNAS in hope that the delegation will be able to bring home a medal.