The Ministry of Foreign Affairs Gives Public Lecture to UNDIP 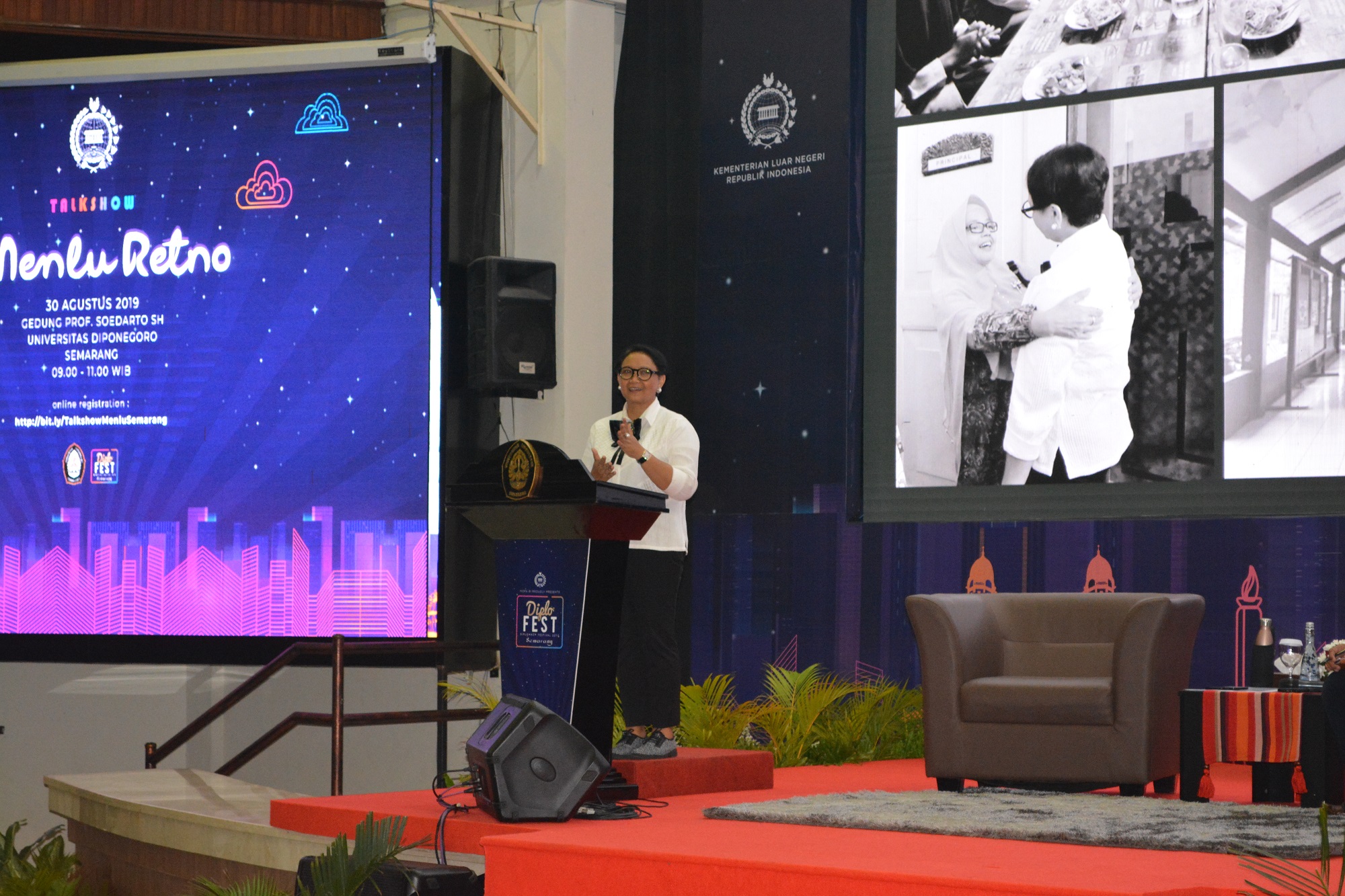 The Foreign Minister Retno Marsudi confessed that this activity was a series of festivals which lasted for 2 days in the city of Semarang.

“A competition that targeting students in the City of Lunpia, with an aim to provide new knowledge about diplomacy and communication with various countries, and is expected to inspire the younger generation of Semarang, especially students to become part of Indonesian Diplomacy,” said the Foreign Minister during the press conference at Prof. Soedharto Building, UNDIP.

“The series of Diplofest events started from Thursday, August 29, 2019 with public lectures at six other universities in Semarang including Unwahas, Unika  Soegijapranata, Unnes, Unissula, Unimus, and UKSW Salatiga,” she added.

In her presentation, Retno said that there were 4 priority targets for the work of the Ministry of Foreign Affairs in President Jokowi’s administration.

One of them was Retno talking about peaceful ecosystems in the world, by way of Indonesia being the 8th Peace Keeper Operation contributor in the world out of 121 in this part of the world along with the improvement of PKO soft skills capacity due to good public communication.

Retno further conveyed the achievements of the Indonesian Ministry of Foreign Affairs and Indonesian Diplomacy, and shared useful information in which the young generation of Semarang, especially Undip students, could become part of Indonesian Ambassadors.

In addition, the audiences were also being encouraged to study foreign cultures and obtain educational information from scholarship providers in the area. Edufair will also presenting university representatives in Semarang and disseminate information and LPDP Scholarship opportunities.

Meanwhile in the discussion of soft skills, students can experience in becoming Indonesian representatives discussing the issue of world peace in the simulation of the UN Security Council session, as well as negotiating with other countries in a simulated bilateral session.

The Undip Rector Prof. Yos Johan Utama, SH., M. Hum in his remarks said that the Diplofest held in Semarang City is expected to encourage the community, especially the younger generation, with a specific of students to be able to better understand and become part of Indonesian Diplomacy.

“This is such a rare opportunity. So far, we may not know what and how foreign diplomacy is carried out. Thus, this Diplofest event may be utilized as well as possible, because Indonesian Diplomacy is a shared property, ” said Prof.Yos.

Prof. Yos added that as a State University with Legal Entity (PTNBH) Undip has the most patent applicant for the past 2 years.

“That is an evidence that education in Undip can be recognized to not only in the national scale level but also in the international level,” concluded Prof. Yos.