The 24th Anniversary of the Faculty of Psychology, Diponegoro University 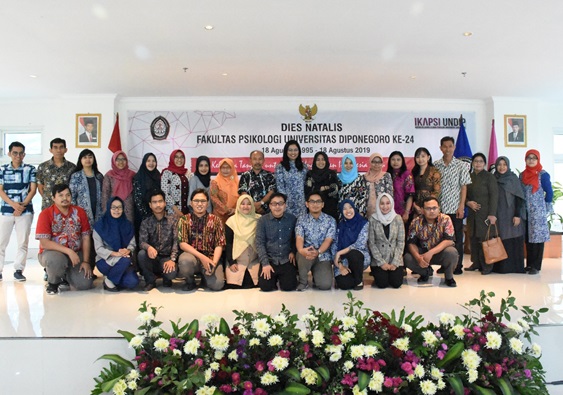 The series of events for 24th Anniversary of the Faculty of Psychology at Diponegoro University was held very well on Friday, August 30, 2019. The event which was opened by the Rector of UNDIP, Prof. Dr. Yos Johan Utama, S.H., M.Hum was attended by lecturers, education staff, students, stakeholders, deans within the UNDIP environment, and dean/head of study program of psychology from State University of Semarang, as well as the administrators of the UNDIP Psychology Alumni Association (IKAPSI). The event was also attended by one of the pioneers of the Faculty of Psychology, Undip, Mrs. Dra. Frieda NRH, MS and Prof. Darmanto Jatman’s wife and daughter namely Mrs. Moer Darmanto Jatman and Mrs. Abigael Wohing Ati.

The first event in the morning session was a scientific speech by Dr. Riza Sarasvita, M.Sc., MHS., Ph.D., a Psychologist, Director of Strengthening Rehabilitation Institutions of Government Agencies, and part of Indonesian National Narcotics Agency with a title of Family and Community Roles in Supporting Superior Human Resources in Indonesia: Psychological Perspectives in Combating Drug Abuse. The event was enlivened with entertainment from the vocal group of lecturers and educational staffs from Faculty of Psychology Undip, which performed a medley of folk songs, and a Psychovocalista choir which included a song Cintaku.

The scientific orations and entertainments later followed with the Launch of a Javanese Storytelling Book written by alumni and pioneers about the experiences of the writers with the founder of the Undip Faculty of Psychology, Prof. Drs. Darmanto Jatman, SU.

In the Empathy Psychology program, the Faculty of Psychology UNDIP shared happiness with elders and seniors who had pioneered the establishment and development of the faculty.

The afternoon session was filled with alumni gatherings by inviting alumni representatives from each generation. The discussion regarding the roles of alumni in the future, a possibility of joint activities that can be carried out in the future, as well as plans for next year’s anniversary was conducted warmly and cheerfully.