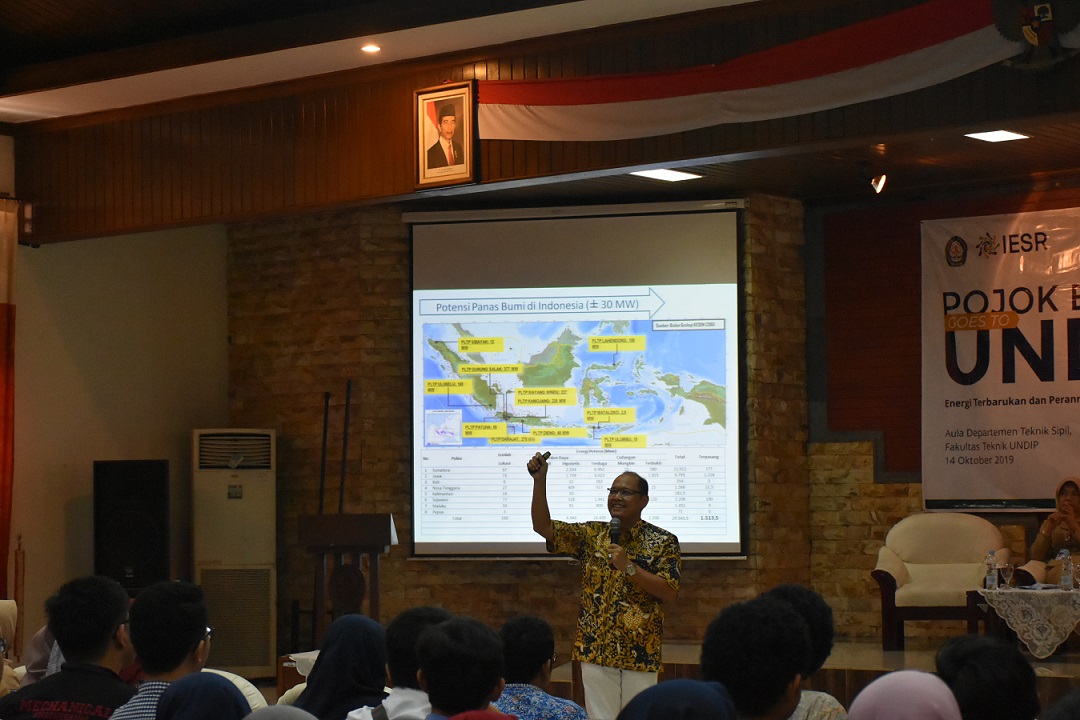 IESR (Institute for Essential Services Reform) together with Diponegoro University held a public lecture and discussion on renewable energy issues at the Undip Civil Engineering Hall, Semarang, on Monday (10/14/2019).

The Dean of the Faculty of Engineering, Diponegoro University, Ir. M. Agung Wibowo, MM, MSc, PhD, in his speech expressed the importance of the issue of energy among students which must continuously be understood.

“The issue of energy is one of the issues at the Faculty of Engineering and we will always continue to work through its implementation in education. Renewable energy will later be demanded to be a strategic issue that must be understood. As millennial genes who will later become candidates for national leaders, you must understand this. “He concluded.

Agus Setyawan, Dr. Eng as one of the panelists from the Physics Department of the Faculty of Science and Mathematics at Diponegoro University revealed the problems that often occurs in the development of geothermal energy in Indonesia as a form of renewable energy.

“The geothermal in Indonesia is so diverse. However, many obstacles that have arisen in Geothermal Indonesia. One of the few obstacles that arise are in the investment costs of exploitation and the high risk of failure, the price of electricity is less competitive, also the social problems that needs to be taken care of.” Said Agus in his speech entitled “Geothermal Energy: A Present from the Heart of the Earth”

He also reminded students to pay attention in the existing law.

“No matter how great you become an engineer, please return to law. Many cases occur due to a bad contact with the existing law. Therefore, we must understand about the law, especially regarding the energy resources. ” He continued.

Marilisya Citraningrum, PhD as Program Manager for Sustainable Energy Access of IESR said that the role of universities is very important to produce young generations who will be in charge in Indonesia’s future renewable energy.

“The role of university is very important. Research and innovation that will prepare a green jobs workforce is green jobs will be necessary in the future. The role of the young generation is important not only in the issues but also as energy users; how Indonesian citizens will transform from fossil energy users to renewable energy users.” She concluded. (Lisa, Dzuriah, Renin / HUMAS)