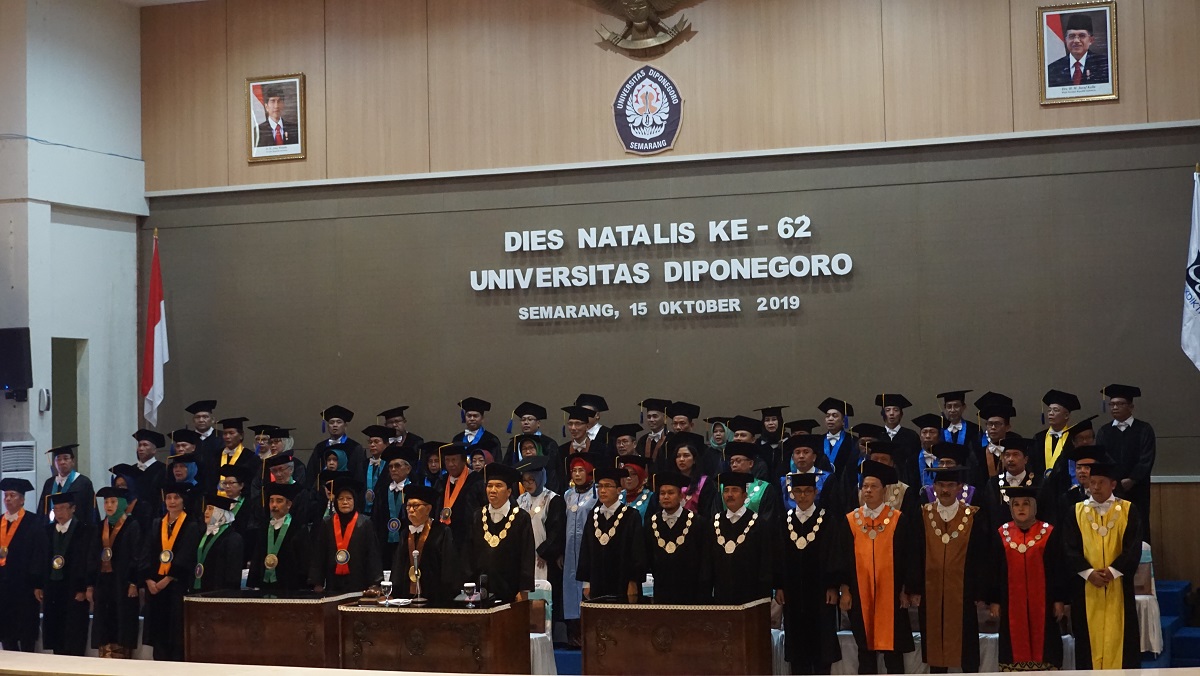 In his remarks, Prof. Dr. Yos Johan Utama, S.H., M.Hum as the Rector of Diponegoro University revealed the process of Undip for this 62 years which has been through various of experiences. Those gained experiences motivates Undip to achieve the vision of being a superior research university and to be known at the international level.

“For 62 years Diponegoro University has devoted itself to the world of higher education in Indonesia. Lots of experience gained, obstacles, and challenges, as well as happiness and pride based on cohesiveness, perseverance, courage, and synergy among Undip’s academic community. All of that has encourage and provide hope to achieve the vision of becoming a superior research university and into an internationally recognized university. ” He said.

Undip Rector, Prof. Yos Johan Utama stated that the 62nd Anniversary is a strategic step due to the motivation of Undip in entering the world’s top 500, even if some of its main indicators are related to absorption.

“Undip graduates in the field of work has been recognized internationally and we are also ranked under 500, means that we are ranked around 300-500 in the absorption,” he said.

“In an effort to improve academic laboratories, the labs are improved using Undip funds because Undip has already holds PTN-BH status which means Undip is independent. Coaching is not only for lecturers but also for students, Undip’s student achievement has also improved from the 15th rank to 3rd national rank for two consecutive years. Undip also has obtained the number 1 title of Intellectual Property Rights (Intellectual Property) in Indonesia, this becomes an assets for Undip in the future so that its rankings will continuously increase as well as the quality of its alumni so that it can be absorbed by the national and international workforce, ” added the Undip Rector.

Prof. Dr. Ismunandar as the Director General of Learning and Student Affairs of Kemenristekdikti discussed about the industrial revolution 4.0 and its relationship with universities where the role of universities is important to enhance the nation’s competitiveness in the current era.

“The contribution and role of higher education institutions is becoming more important key as a problem solver. Higher education is increasingly required to be able to support the progress of the nation, researching and producing new sustainable knowledge, and also producing an educated, full of quality, dynamic, and professional human resources, ” he said. (Lisa, Rosi, Patricia / RK / HUMAS)