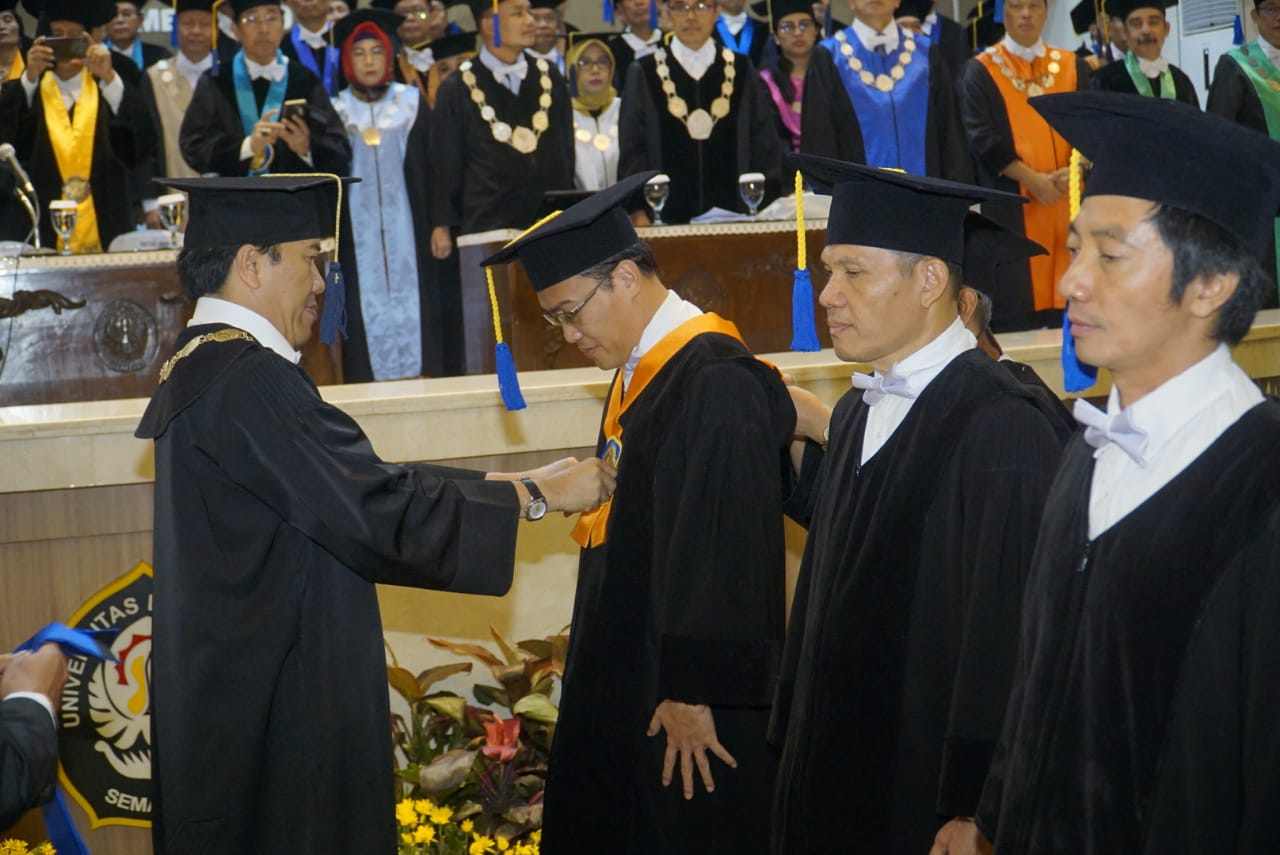 In his speech, Undip Rector Prof. Yos Johan Utama said that both lecturers and students must be adaptive by continuing to innovate so as not to become a marginalized nation. “Efforts made to continue to increase capacity are through scholarship programs, research assistance and professor acceleration with the one professor one candidate program. Furthermore, he said that the crown of achievement is not merely ranking, but the confidence of the workforce in Undip graduates who have competence.

In the inauguration of Prof. Budi Setiyono, S. Sos., M / Pol.Admin., Ph.D. who also serves as Vice Rector for Academic and Student Affairs raised the topic “Initiating Welfare State Design in Indonesia”. In discussing his speech Prof. Budi Setiyono said that at present, the social security program in Indonesia still being implemented partially and has not been structured in an integrative system. At present there are several social protection mechanisms that are informally developed in several regions and community groups, as well as a government social security program. The program in general is still managed in a segmentative and segregative manner, and only reaches a small portion of the population, especially workers in the formal sector. Whereas the poor and informal workers only receive qualitative benefits that are not permanent.

“The social security system will be able to be developed more systemically and permanently if it is based on an integrative design with a check and balance mechanism (between the rights and obligations of the people) and supported by the economic capacity of the productive age population or working age population” said Prof. Budi.

At the end of his speech Prof. Budi Setiyono said that it was necessary to analyze the condition of the population of economic age through the dynamics of employment that occurred. In order to be able to implement the concept of an integralistic guarantee system, a holistic and integral system (logframe) framework needs to be made, which connects obligations and rights. The obligations of citizens include several things, including paying taxes, defending the country and obeying the law, while their rights are to get social protection, legal protection, and participate in the administration of the state.

Meanwhile, Prof. Dr. Jamari, ST., M.T. describes the Prospects for the Development of Contact Mechanics in Increasing Product Reliability. Of the six formulas applied, all of them produce a product that has been downstreamed.