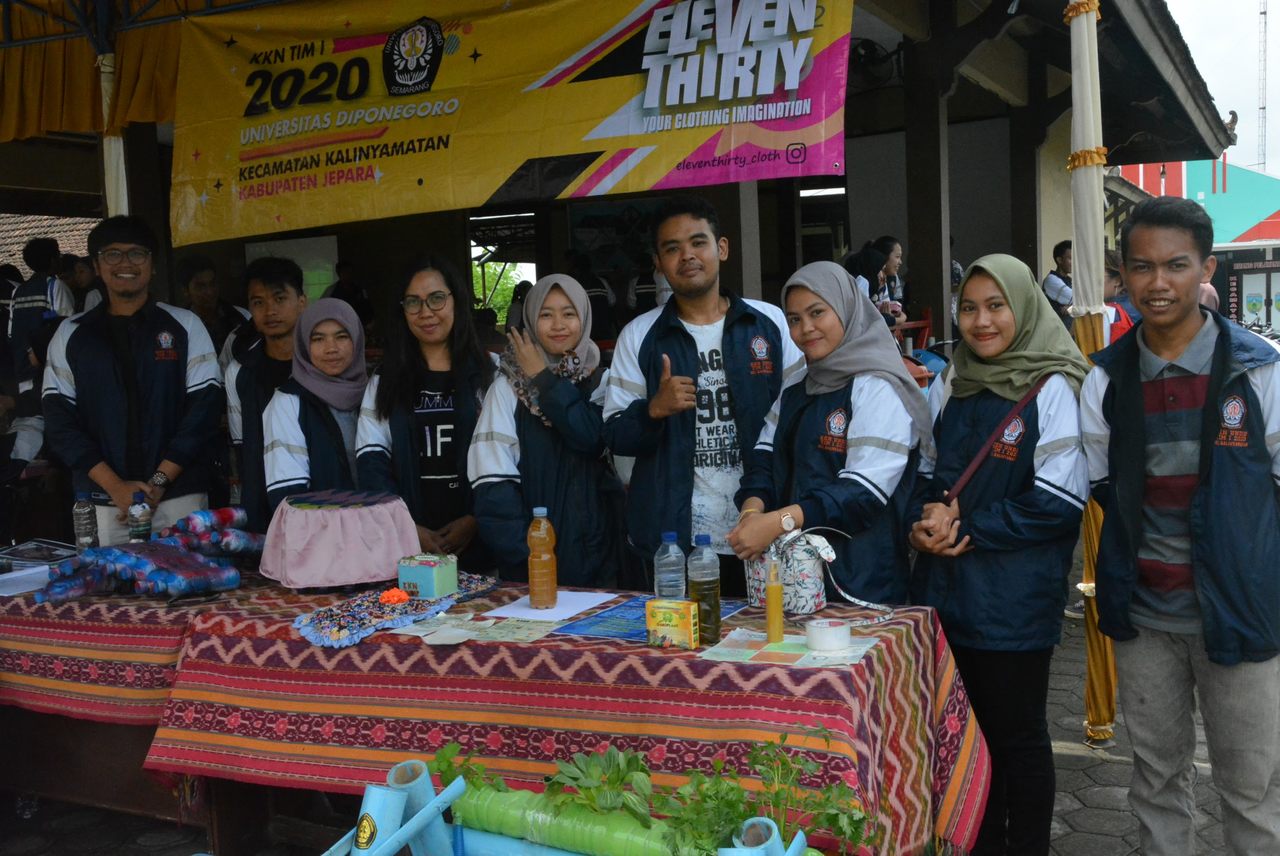 Doing a community service as a part of Three Pillars of Higher Education gives challenges for the students who get involved in it. It has also happened to the students of Team I Community Service in Jepara who are placed in several villages which are divided into three sub-districts, there are Jepara, Kedung and Kalinyamatan, Jepara, Central Java.

They have lived in the locals’ house and have interacted with the locals for 45 days. At the beginning of their deployment, they observed and identified the field condition to find what they can do during their stay. They made a program to be implemented during their Community Service period right after they got the result of their observation. Here is the challenge; how do they realize their work program, ask the locals to get participated in their program and later they can get the benefits from the program itself. Generally, the parameter for the success of Community Service is when the locals feel helped with their presence.

In the visitation for Monitoring and Evaluation of Team I Community Service Undip in Jepara, on Wednesday (5/2/2020), the Vice Rector of Academic and Students, Prof. Budi Setiyono, S.Sos., M.Pol.Admin., Ph.D., talked about the three micro indicators as a parameter for the success of the program. One of the examples is when the students are doing their community service, at least they know 10 locals well; know their names and their jobs. The second indicator is they know the condition of their surroundings.

“They know and understand well about the locals’ problem. At least they find 5 to 6 problems and can put them into priority scale. For instance, what is the disease that occurred by the locals, how is the condition of village’s infrastructure, and many problems that make the locals less prosperous,” explained Prof. Budi in his speech.

Next, Prof. Budi explained the third indicator which measures the successes of a community service program that is whether the students have something to be offered, to be applicated or to be collaborated with the locals in reducing locals’ problems in the Community Service location. If the program could not be finished or could not be implemented during the Community Service period (long term program), Prof. Budi asked the students to return to the village in the future.

“If the program cannot be finished during the Community Service period, one day you have to return to this village. Maybe 10 years later, helping them again,” said Prof. Budi.

Team I Community Service Undip in Jepara on the Monitoring and Evaluation activity which took place in Kalinyamatan sub-district hall, said that they had carried out all of the programs that had prepared. The Community Service team in Kalinyamatan sub-district that is placed in 10 villages has its work program for each village. In the village’s work program, there are some major work programs; the application of waste management in Margoyoso village, the making of eco brick by the students in elementary school by using waste cloths from the convection and the introduction of soil fertility detection devices by using the bulb in Purwogondo village.

Meanwhile, Community Service Team in Jepara sub-district which placed in 10 villages has its major program, there is the making of verticulture that is the technique of farming using the narrow land. It is also the making of hand sanitizer from aloe vera, detergent from waste cooking oil, and eco brick garbage cans as a solution for reducing the plastic waste.

Meanwhile, the Community Service Team in Kedung sub-district, Jepara regency, has also several major programs in the villages they are placed in. For instance, Such as the empowerment of the Salt Farmers’ group through the Prisma Rumah Garam program to increase the yield of village salt production, the making of mangrove chips ‘Kampoeng Kali’ as a branding for Kalianyar village, the designing of Karangaji Village rice field agrotourism as a design reference for the village apparatus of long-term village development, the training for Karang Taruna youths in Sowan Kidul village in making the simple emergency lamp that power from 1.5-volt batteries, 3.7 volts or the power bank.