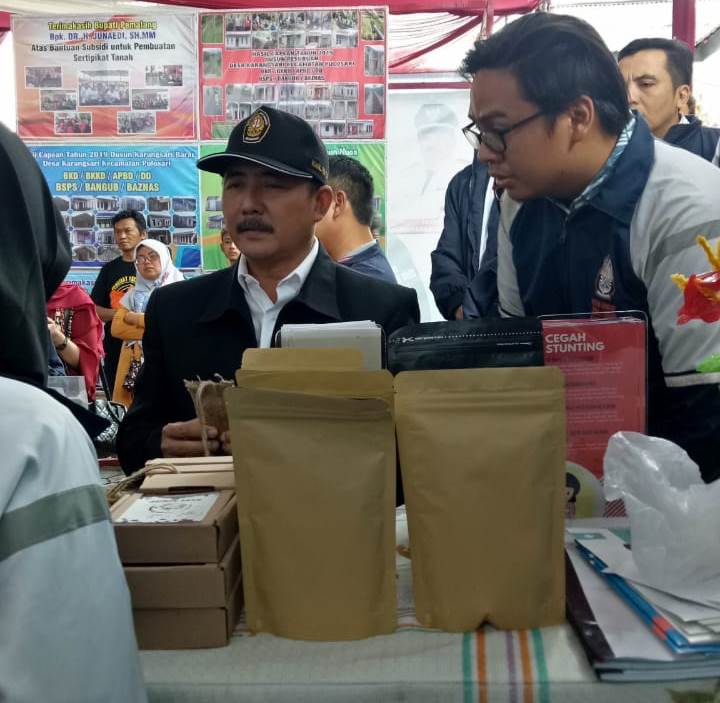 Pemalang regency is not only rich in local commodities such as pineapples and potatoes but also rich in tourism potential especially in several villages located on the slope of Mount Slamet with its natural beauty.

The students of Team I Community Service Undip had done their community service program by implementing their knowledge they have to develop local potential which collaborated with the local community. The innovations and products they develop with the locals were shown on Community Service Expo which located in Pulosari sub-district, Pemalang regency, on Sunday (9/2).

The activity was also including Monitoring and Evaluation as one of the students’ success indicators in implementing Three Pillars of Higher Education in community service. This activity was attended by Vice Rector of Communication and Business Dr. Darsono, SE., Akt., MBA, Representatives from the Agency for Regional Development Pemalang.

In his speech, Dr. Darsono said that Undip thanked for the opportunity to let the students implement their knowledge with the locals in developing the local potential. “We hope that the innovations and products produced are effective products that provide great benefits for the community,” he said.

The innovations and products which are being developed in some villages in Pulosari sub-district, Pemalang Regency are training of making aromatherapy candle based on the coffee, developing local economy by cultivating red ginger in Sterling village, and training of making the Liquid Organic Fertilizer as use of the remaining crop yields. Meanwhile, in Clekatan village, the locals are trained to make soaps made of potatoes which useful for clearing acne scars, overcoming premature aging, treating wrinkles and collagen for the skin.

As the biggest pineapple producer in Central Java, the students are used to make the products based on the pineapple. If pineapple previously processed into jam, sticks, dodol, sweets, and chips, now it has a new variant that is processed into pineapple cookies and pineapple wingko. Besides, there is also processed food made of cassava flour material called mocaf, which later produced into Bromo or known as brownie mocaf.

Another innovation that is useful for the locals is the design of fog catchers to overcome water needs during the dry season in Jurangmangu village. There is also drafting of a masterplan for the development of tourism in Bakersfield village namely Cemara Sakti and Pakis Blengkunang climbing routes. While in Penakir village is an effort to manage Thin Igir tourism which is a protected area on the slopes of Mount Slamet.