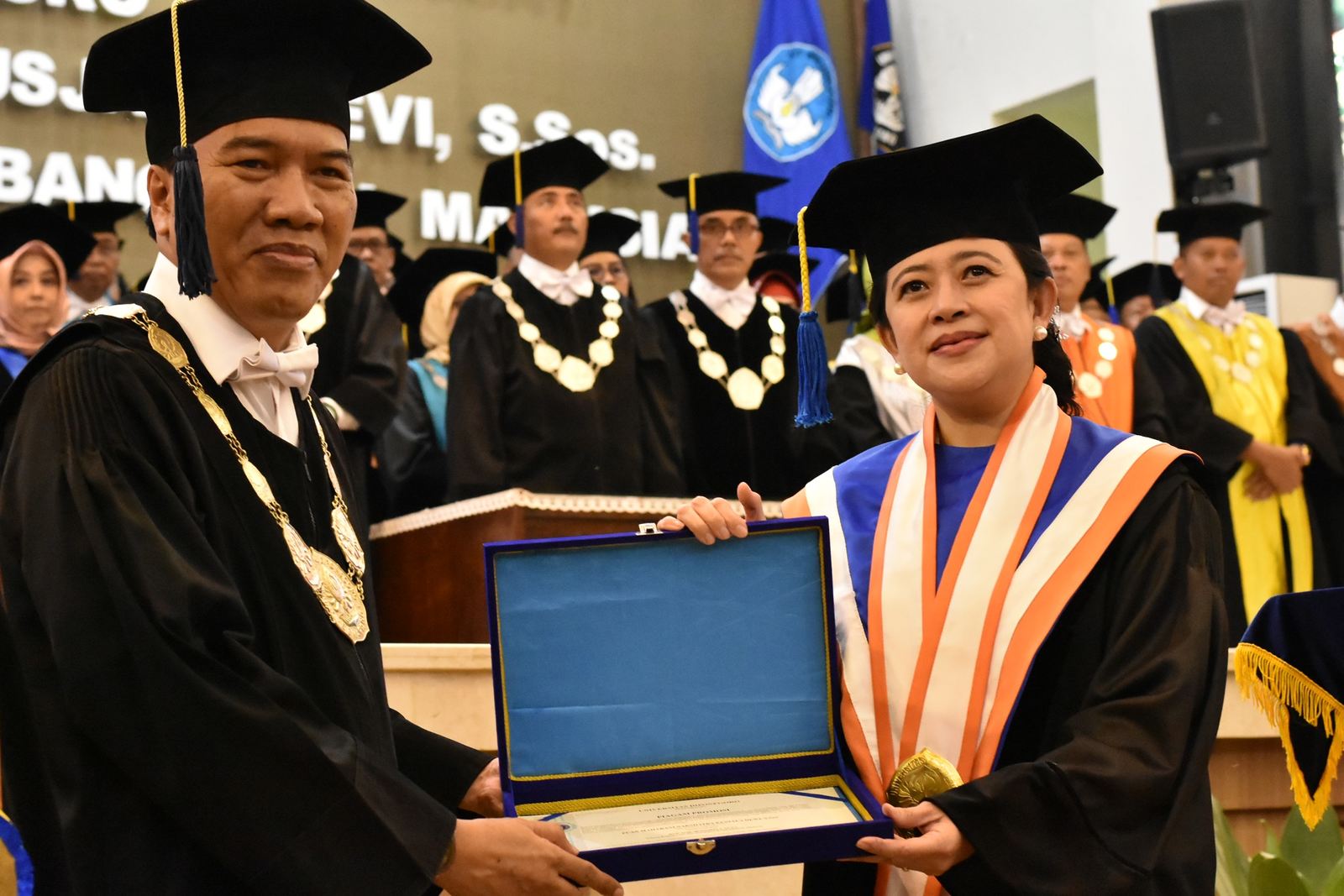 According to the regulation in Article 23 PP 52 the year 2015 about the Undip Statuta, Undip will hold an Academic Ceremony for the Honoris Causa Doctoral Degree to the Parliament Chairperson of the Republic of Indonesia, Mrs. Puan Maharani. She is the 13th person who got the Honoris Causa title from Diponegoro University if it counted from 63 years ago.

The proposal of Ms. Puan Maharani as a Honoris Causa in the field of “Culture and National Development Policy” submitted by DPP Alumni Association of the Faculty of Humanities and recommended by many parties including the Minister of Education and Culture (Now MENKO PMK) Prof. Dr. Muhajir Effendy, M.A.P., DPP IKA FIB, Prof. Dr. Mohammad Mahfud MD, FK METRA and Dr.Mohammad Sobary. The proposal was proposed since she served as Coordinating Minister for Human and Cultural Development (PMK) RI.

The Dean of Faculty of Humanities which supported by the Dean of Faculty of Social Sciences and Political Sciences later proceeded to obtain the approval from the Academic Senate of Diponegoro University. The approval request was the mandate of Article 46 paragraph 1 letter h PP No. 52 the year 2015 which states about the authority of the Academic Senate in approving the Rector in proposing professors and proposals for honorary doctors.

The Academic Senate Approval is based on the provisions of the Minister of Research, Technology and the Higher Education Republic of Indonesia Number 65 the Year 2016 regarding to the Honorary Doctorate Degree.  There is an evidence that Mrs. Puan Maharani has contributed significantly in the progress, prosperity, and / or welfare of the nation, the state and mankind, both as individuals and in her position as Leader of the state institutions, as Coordinating Minister for PMK and the Parliament Chairman of the Republic of Indonesia, her main role was in the policy of drafting several legal products such as Law NO. 5 of 2017 concerning about the Advancement of Indonesian Culture as well as legal products Government Regulation Number 2 of 2015 concerning Regulations implementing law number 7 of 2012 concerning handling social conflicts.

The Agreement of UNDIP’s Academic Senate was then executed as outlined in the UNDIP Rector’s Decree and the formation of the Review Team and the guidance for the writing of the awarding speech.

The activity was attended by the 5th President of Indonesia Ms. Dr. (HC) Diah Permata Megawati Setiawati Sukarnoputri, the Chairman of the People’s Representative Council of Indonesia Dr. (HC) Puan Maharani Nakshatra Kusyala, S.I.Kom and along with all the representatives and members, the 10th and 12th Vice Presidents of Indonesia Dr. (Hc) Drs. H. Muhammad Jusuf Kalla, 11th Vice President of RI Prof. Dr. H. Boediono, B.Sc., M.Ec, the Chairman of the 16th People’s Consultative Assembly of Indonesia H. Bambang Soesatyo, S.E., M.B.A. along with all representatives and members, all Chairperson,  deputies and members of the State Higher Institutions, All members of the Indonesia Maju Cabinet, the Governor of Central Java Ganjar Pranowo.

The Rector of Undip in his speech welcomed the guest to Undip as a fortress campus and the bull of Pancasila.

“Undip dares to give the title of Dr. HC because Undip is 1 of more than 4700 universities in Indonesia that enters World Class University. Undip is the 2nd best of PTNBH and produces the fastest graduate in getting a job,” said the Rector.

“As the one who got that title, automatically Dr. Hc Puan Maharani Nakshatra Kusyala, S.I.Kom became an alumnus from Undip which is contained 1/4 million people,” added Prof. Yos

“We hope that in the future Ms. Hc. Puan Maharani Nakshatra Kusyala, Devi S.I.Kom after receiving the title Dr.Hc from Undip can develop cultural policies that can unite the Indonesian in the Republic of Indonesia with the Pancasila as an ideology and excels in any world competition,” concluded the Rector

The promoter of the awarding of Dr. HC Puan Maharani, Prof. Yeti Rochwulaningsih on the occasion said that after going through a series of studies, a measurable, credible and accountable review of the Academic Senate agreed to give unanimous approval at the Undip Academic Senate meeting, agreeing that Puan Maharani was worthy and proper and deserved an honorary doctorate causa.

In her scientific speech entitled “Culture as the Main Foundation for Building Indonesian Humans with Pancasila to a Masya Era 5.0″ Puan Maharani said that Indonesian culture must be viewed and functioned to humanize humans. The role of the state is very important to ensure that people with Indonesian culture are not the ones from other countries. The implementation is by the power in building a society that focuses on the 5.0 revolution,” said Puan.

Puan added that the awarding of the Dr. HC title was our joint effort in building the nation, the willingness is based on actual developments in Indonesia, since reform era tends to play a political role in power in all walks of life, these phenomena have eroded the noble values of Pancasila, ” said Puan.

Puan hopes that in the increasingly massive global competition era, the development of reorientation movement is needed. The concept of human and cultural development is becoming the orientation in development.