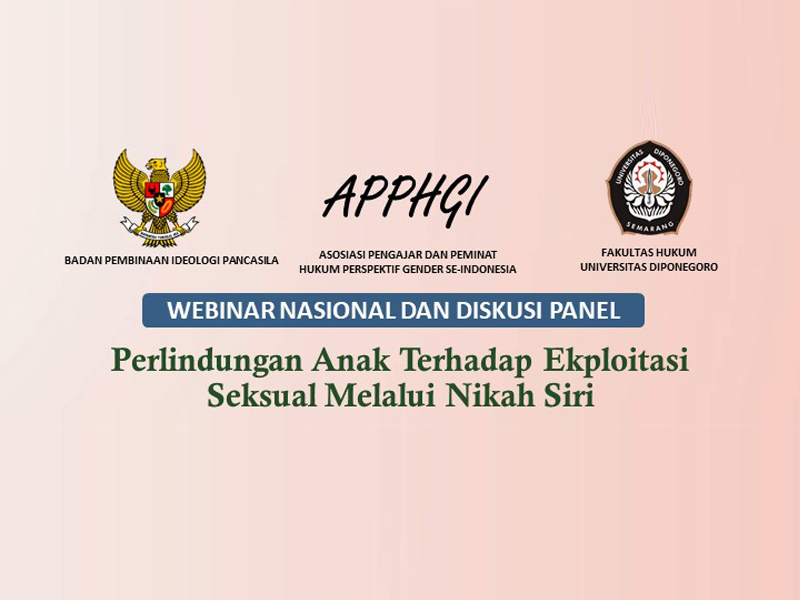 National Webinar and Panel Discussion on the Theme of Child Protection Against Sexual Exploitation through Siri Marriage: Siri Marriage Specifically for Minors Should Be Avoided.

The Pancasila Ideology Development Board through the Deputy Director of Advocacy in the Field of Law, Advocacy and Regulation Oversight in cooperation with the Faculty of Law of Diponegoro University and the Association of Teachers and Enthusiasts of Gender Perspective Law in Indonesia has successfully held a National Webinar and Panel Discussion with the Theme of Child Protection Against Sexual Exploitation through Siri Marriage on Tuesday (5/19) using Zoom application. The participants’ interest was so great in this webinar. Therefore, other participants are allowed to take part in the webinar via UNDIP FH YouTube live streaming.

Before the speakers explained their materials, the discussion was preceded by the opening remarks from Plt. Deputy for Legal Affairs, Advocacy and Regulation Oversight followed by remarks from Prof. Dr. Retno Saraswati, SH, M.Hum (Dean of FH UNDIP) and Prof. Dr. Hariyono, M.Pd (Deputy Chair of BPIP) whom at the same time also officially opened the Webinar event.

Prof. Dr. Hariyono, M.Pd in his speech stated that Pancasila aims to elevate human dignity means that the exploitation of children through siri marriage requires a cultural approach to study why their parents agree to underage siri marriage.

Prof. Dr. Retno Saraswati, SH, M.Hum stated that children are entrusted by the Creator to continue the generation. It is time for the state to protect the next generation from being trapped in exploitation.
Dr. Susanto in his presentation stated that the fact that an exploitation of children through Siri marriage does occur and the pattern is always changing. In many cases it only aims for sexual satisfaction in the agreed price and time. The victims are mostly from the economically weak groups.

Muhyidin, S.Ag, MH in his presentation conveyed the purpose of Islamic marriage. Rights and obligations of underage marriages will not be fulfilled.

Dr. Kunthi Tridewiyanti, SH, MH also stated that the legal consequences did not have a major impact on the perpetrators. Therefore, marital marriages especially for children should be avoided.

Prof. Dr. Pujiyono, SH, M.Hum conveyed that there have to be a paradigm shift in the thinking of judges in judging, which must be oriented towards the protection of children, not merely seen from the “approval” of children, because children are still immature both physically and mentally.

Dra. Retno Sudewi, Apt, M.Sc, MM during her presentation stated that prevention of violence against women and children is the policy and priority of the Governor of Central Java in 2019-2024.

AKP. Puji Hari conveyed that the participation and awareness of the public and mass media related to the treatment of children must be increased.

Later, the participants were given the opportunity to provide a response to the presentation from the speakers. At the ending of webinar event, the Deputy Chair of BPIP expressed his gratitude to the Speaker, Moderator, Committee and all participants whom enthusiastically following the event to the end.