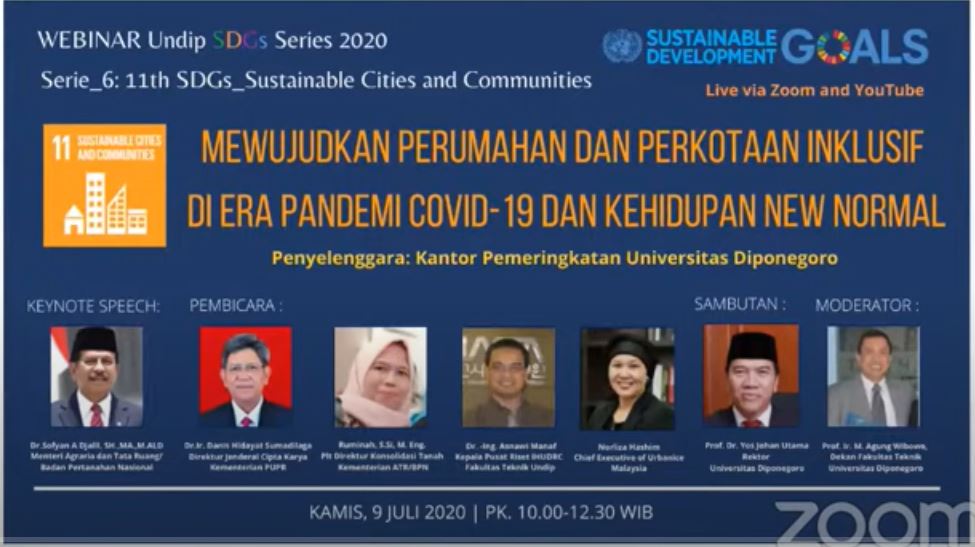 Sofyan Djalil directs Undip to work with regencies and cities in Central Java to help creating a quality RTRWs. During this time, said the ATR Minister who also serves as the Head of BPN, the prepared draft was made by the consultant, however with limited funds. “Usually, a regional RT-RWs were made by consultants at a cost of Rp. 200 million. You pay for 25 and hoped for 100 is certainly impossible, “said Sofyan Djalil, in the 6th SDG’s Undip Webinar Series with the theme “Realizing Housing and Urban Inclusion in the Covid-19 Pandemic Era and New Normal Life” which was held virtually on Thursday (7/9/2020).

He hoped that in the future the prepared RTRW would accommodate all the elements of the participating fields, including academics and the wishes of the people so that they would produce a more appropriate and fit spatial arrangement, something that more friendly to local conditions. That way, the provision of an area for settlement that are out of reach can be avoided.

According to Sofyan, by involving the academics, it hopefully will result in better spatial and territorial design. That way, the ATR Ministry will only have to provide final approval for the proposed RTRW by the regionals.

This SDG’s Series webinar, which was held by the Undip Rating Office led by Prof. Dr. Denny Nugroho Sugianto, ST., M.Sc, was opened with a speech from Undip Rector represented by Vice Rector 1 for Academic and Student Affairs, Prof. Budi Setiyono S. Sos., MPolAdmin., PhD, and moderated by the Dean of the Faculty of Engineering Undip, Prof. Ir. M. Agung Wibowo, MM., M.Sc., PhD. Undip Rector, Prof. Dr. Yos Johan Utama, S.H., M.H, through Vice Rector 1 hoped that this seminar can contribute ideas in an effort to realize the availability of healthy and affordable housing for urban communities.

Meanwhile, the Chief Executive of Urbanice Malaysia raised an issue of Reopening Cities and Big Cities “Re-Opening Our City and Towns, Re-think, Re-set, Re-energize, Re-build” which act as a comparison. ATR’s Director of Land Consolidation, Ruminah, revealed the government’s strategy with a presentation entitled “Patterns and Implementation Strategies in the Practice of Housing and Settlement Development in Indonesia”. From Undip Faculty of Engineering, Asnawi Manaf delivered a paper entitled “Inclusive Governance: The 3rd Road to Sustainable Cities and Communities” which was learned from collaborative housing practices in Kendal.

ATR Minister and Head of BPN, Sofyan Djalil as the keynote speaker expressed their hopes that housing provision in urban areas can grow upwards, not sideways. This pattern needs to be applied, because otherwise he predicts that Java will be facing difficulties in fulfilling water sources as well as land for food and plantations if the settlement grows sideways. Cities will become sprawling, meaning that it will become inefficient.

Transportation will be an expensive cost element because the distance between residential place and workplace become very far. Settlements that grow sideways will also make the agricultural area needed to provide food continue to erode. Water sources will be disturbed. That way, vertical housing becomes a rational choice.

“I saw it in Sarajevo, in Bosnia, the Balkans, Turkey. There the community can meet their housing needs by building upwards. Parents build houses with strong foundations, because when their children finally have family, they will build a housing on top of them,” Sofyan revealed his observations.

He warned, if this was unable to be executed, not only that it will erode the agricultural and plantation areas, public spaces will also forcefully remove. And land prices in urban areas will skyrockets and unaffordable. He gave an example of what happened in Hong Kong, where housing ownership must be paid in installments for up to two and three generations.