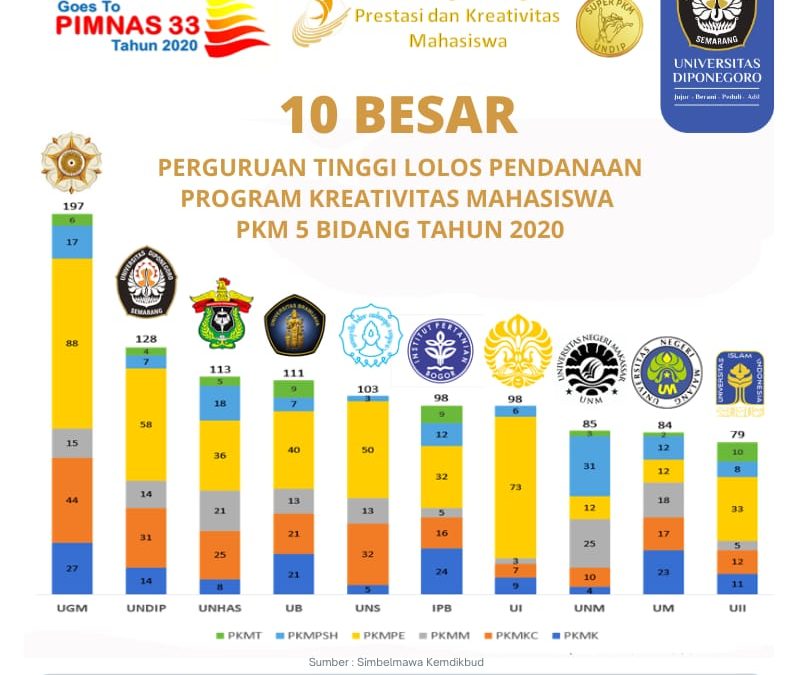 SEMARANG – As many as 128 students were able to win an honorable position in the 2020 Student Creativity Program (PKM) competition held by the Ministry of Education and Culture. With the entry of 128 student proposals and at the same time it listed Undip as the 2nd largest PKM university in 2020.

Undip Vice Rector 1 for Academic and Student Affairs, Prof. Budi Setiyono SSos, M.Pol.Admin., PhD, said he was proud of what his students achieved in this prestigious creativity competition. “Frankly, we are proud of the achievements of the students in PKM 2020. We will do our best to support the recipients of PKM funds so that the final results can shine,” said Prof. Budi Setiyono, Thursday (8/8/2020).

According to Undip Vice Rector 1, there were 58 research proposals approved by the Ministry of Education and Culture through PKM 2020, then there were 31 community service proposals, 7 entrepreneurship program proposals, 4 technology proposals and 14 creative initiative proposals. “We will encourage the recipients of PKM funds to be able to succeed in the Pimnas event and achieve a gold medal,” he hoped.

Pimnas or National Student Scientific Week is a competition for the creative work of Diploma and Undergraduate students in the national scale held by the Director General of Higher Education. In this event various students competed, from various departments, and various parts of Indonesia. 2020 is the 30th time Pimnas was held.

Budi Setiyono confessed that PKM is an important asset for Pimnas. Even so, he stated that what was obtained from PKM was a success in itself. Therefore, the university will conduct a couching and intensive assistance for students who pass the 2020 PKM. “The university is also preparing a funding incentive scheme for medal winners,” he added.

Asked about the types of research and technological innovations included in the 2020 PKM, Budi said that they were very diverse. He also said that the acquisition was almost evenly distributed across all faculties. “In principle, the theme must be interesting and useful. Because of that, we will help with the process as well so that the results of the research can be felt by the wider community. “

The Ministry of Education and Culture through the Directorate of Learning and Student Affairs, Directorate General of Higher Education, announced the PKM program participants which its proposals has received an approval and funding from the government. Gajah Mada University (UGM) placed 197 students in this competition, followed by Undip with 128 students, then Hasanuddin University Makassar (113 students), Brawijaya University Malang (111 students) and Sebelas Maret University Surakarta (103), as well as Bogor Agricultural Institute (98 students).

The approved proposal will receive funding through a work contract between the Directorate of Learning and Student Affairs and Higher Education for funding from State Universities. Meanwhile, contract for private universities will be conducted with the Regional Higher Education Service Institutions.