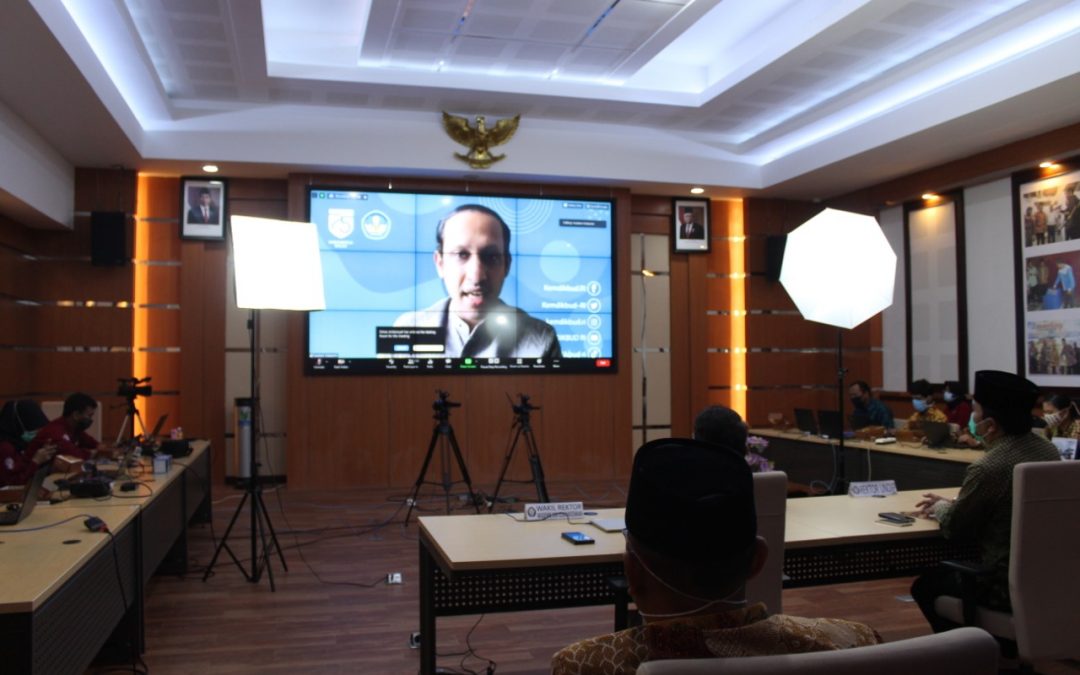 Recently, Diponegoro University held a Launching of the Belajar-Kampus Merdeka Program at Diponegoro University on Thursday (13/8/2020). The event, which was packed as a Company Gathering entitled Launching of Belajar-Kampus Merdeka Activities, raised an issue of Strategic Collaboration in Creating High Work Force University-Company which was held online at the Rector Meeting Room of the Undip campus in Tembalang.

The Belajar-Kampus Merdeka Program was launched by Indonesia’s Ministry of Education and Culture Nadiem Anwar Makarim, BA., MBA with the participation of more than 500 partner companies of PT Undip Citra Ciptaprima and Rectors from several universities in Indonesia.

In his remarks, Mendikbud Nadiem Anwar Makarim expressed his appreciation to Diponegoro University for picking up the ball in implementing the Belajar-Kampus Merdeka program by cooperating with many companies as partners for the implementation of merdeka learning. Nadiem further emphasized that, “Freedom to learn is freedom to seek experience and knowledge relevant via internships at companies or institutions outside campus”. The goal is to participate in internships and seek experiences that is relevant to the knowledge gained from the company which is to create graduates who are qualified and ready to work. Furthermore, Nadiem explained that the Government will support this Belajar-Kampus Merdeka program by providing incentives for universities to collaborate, inviting practitioners from companies to teach as well as lecturers exchange to enrich knowledges and experiences.

As for companies, this merdeka belajar program is an extension program to recruit graduates, new prospect, prospective employees who are reliable and ready to work.

In line with the Minister of Education and Culture, Diponegoro University Rector Prof. Yos Johan Utama, SH., M. Hum. thanked the Minister of Education and Culture and the Government for the welcome and support for the belajar-kampus merdeka program. Prof. Yos reported that Undip had made improvements to the curriculum which was adjusted to the merdeka learning program in each study program. “We really support the belajar-kampus merdeka program launched by the Minister of Education and Culture on January 24, 2020”, said Prof. Yos. “Therefore, Undip have built links and have matched with more than 1500 companies in Indonesia managed by PT Undip Citra Ciptaprima”, he explained. Many Undip graduates are absorbed in the field of work, entering the top three in the QS rankings version as a university which graduates are widely accepted by the field of work. Prof. Yos also explained that not only did Undip prepare reliable prospective employees, but Undip also educated graduates to become entrepreneurs or business person.

The Company Gathering event with the Launching of the UNDIP Belajar-Kampus Merdeka Program event presented Prof. Dr. Ir. Budiyono, M.Si. as the Dean of the Vocational School who explained the material Link and Match for University and Company. Prof. Budiyono said the link and match model between Industry and Higher Education are similar to marriage. It also related with preparing a delicious dish. The campus makes a good curriculum adjusted to industry needs.

“The industry has orders for very delicious dishes, campuses prepare good ones, so the recipe must be made jointly between campus and industry. Among them can be done by providing opportunities for student internships, training for lecturers and students by industry circles,” said Prof. Budiyono when describing the Link and Match Model between Industry and Higher Education.

Also present as a speaker were Fitrie Arianti, SE., M.Sc., who served as President Director of PT Undip Citra Ciptaprima who explained about the Career Development System. “We are very grateful everyone who have joined and participated in building human resources, starting from still carrying a status of a student until accepting it after graduation. The competencies that we have prepared makes Undip alumni ready to enter the field of work. We are also happy because the company members have prepared suitable job opportunities”, said her when describing the Career Development system material. Fitrie also said that through PT UCCP, Undip currently has a program to accelerate the competence of students and graduates so that they are ready to enter the work market in the upcoming Covid and Post-Covid era.

As for moderator, it was moderated by the Vice Rector I for Academic and Student Affairs Prof. Budi Setiyono, S.Sos., M.Pol.Admin, Ph.D.