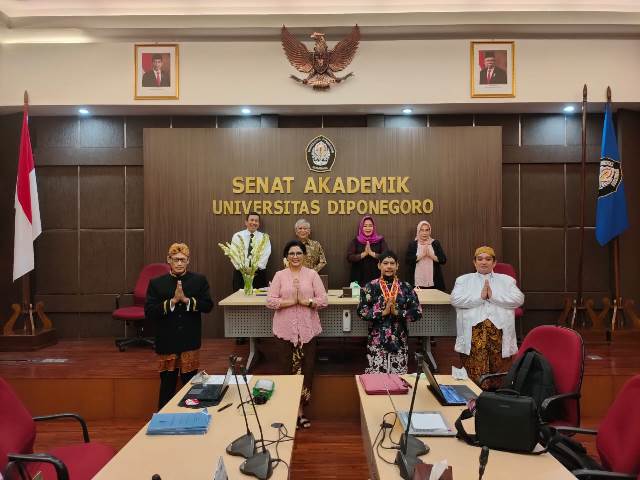 “The large number of prospective professors means the success of the acceleration program of professors who contributed to the entry of Undip into the 500 best universities in the world,” he explained. “In the future, the contribution of the professors will bring great benefits to the community and the progress of Indonesia,” he concluded.

The presentation was begun from Prospective Professor Dian Ratna Sawitri, S.Psi., M.Sc., Ph. D. with a scientific paper entitled “Career Alignment of The Youth-Parent: The Foundation of the Nation’s Future Generation”. Dian revealed that by 2030-2040, Indonesia will experience a demographic bonus in the form of addition of a large number of productive ages.

Then followed by Suharyanto, M.Sc. from the Faculty of Engineering entitled “Maintaining the Sustainable and Sustainability of Water Resources”. Suharyanto explained that the management of water resources must be carried out in an integrated manner between conserving water resources, utilizing water resources, and controlling water damage resources in a balanced and sustainable manner. Followed later by 2 professor candidates from the Faculty of Science and Mathematics namely Drs. Sapto Purnomo Putro, M.Sc., Ph.D. and Dr. Kusworo Adi, S.Sc., MT in turn presenting their scientific paper.