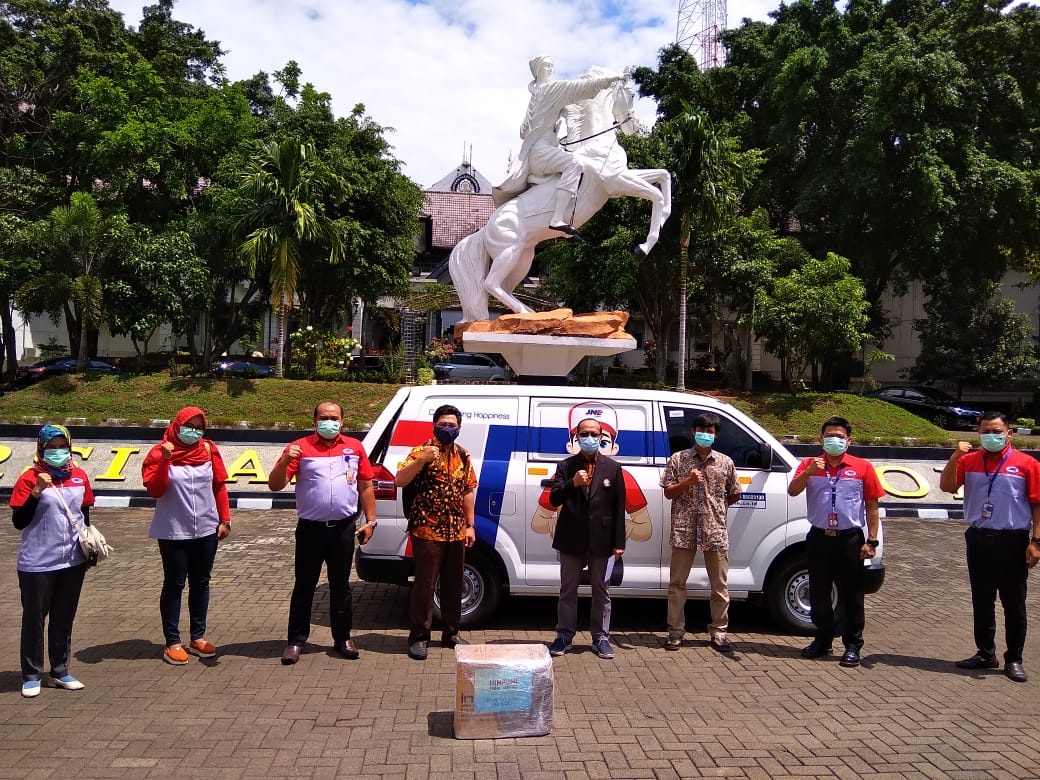 SEMARANG – Logistics company JNE have provided free shipping services to support the distribution of UNDIP Alumni Association (IKA) assistance to residents in Tembalang District and its surroundings. The donation in the form of masks, hand sanitizers and disinfectant liquid from IKA UNDIP was carried out in the event of UNDIP’s 63rd Anniversary.

Head of JNE Semarang Branch, Wahyu Sangerti Alam, said that his company’s participation in helping to send this free package was part of his company’s Corporate Social Responsibility (CSR). “JNE management has agreed to be involved in efforts to help deal with COVID-19, in this case distributing aid in the form of masks, hand sanitizers and disinfectants to the public,” said Wahyu Sangerti Alam, Wednesday (30/9/2020).

The commitment to provide free delivery of community assistance carried out by JNE has also been carried out during the distribution of personal protective equipment (PPE) with a number of institutions and foundations to a number of points when PPE became scarce in the market. Even though it was an assistance, the delivery service was still carried out in a professional manner and according to the agreed time.

According to Dr. Nurjazuli, the assistance from IKA UNDIP, which was sent from Jakarta, would later be distributed along with other UNDIP assistance to the community in Tembalang, Bulusan and Kramas Villages, Tembalang District, Semarang City, which is located around the UNDIP campus. This assistance is expected to ease the burden and strengthen community resilience to face the COVID-19 pandemic. “In the future, the total number that will be distributed will be 940 packages. The details of the distribution are: Tembalang Village 320 packages, Bulusan 320 packages, and Keramas Village 300 packages,” said Nurjazuli, after the assistance handover ceremony from IKA UNDIP.

This assistance, he added, was a form of UNDIP’s concern in the midst of the COVID-19 pandemic. This is because masks, disinfectants and hand sanitizers are urgently needed by the community in carrying out health protocols. He reminded that many of our brothers and sisters were forced not to wear masks not because they were disobedient but because the amount of it was limited. Therefore, an assistance was needed.

The aid is scheduled to be distributed in the UNDIP 63rd Anniversary social service (Baksos) which will be held on Friday (2/10/2020). And symbolically given to each head of the village, and also witnessed by head districts at the UNDIP campus. Then, after the symbolic giving, UNDIP will deliver the assistance to the chosen sub-districts. For Kramas sub-disctrict, UNDIP will deliver them to RT / RW.

Nurjazuli, who is also the Secretary for the 63rd Anniversary of UNDIP, said there will be number of events to enliven the series of anniversary events. There are tennis and badminton competitions attended by internal UNDIP employees as well as international seminars held by FKM and the Faculty of Fisheries and Marine Sciences.