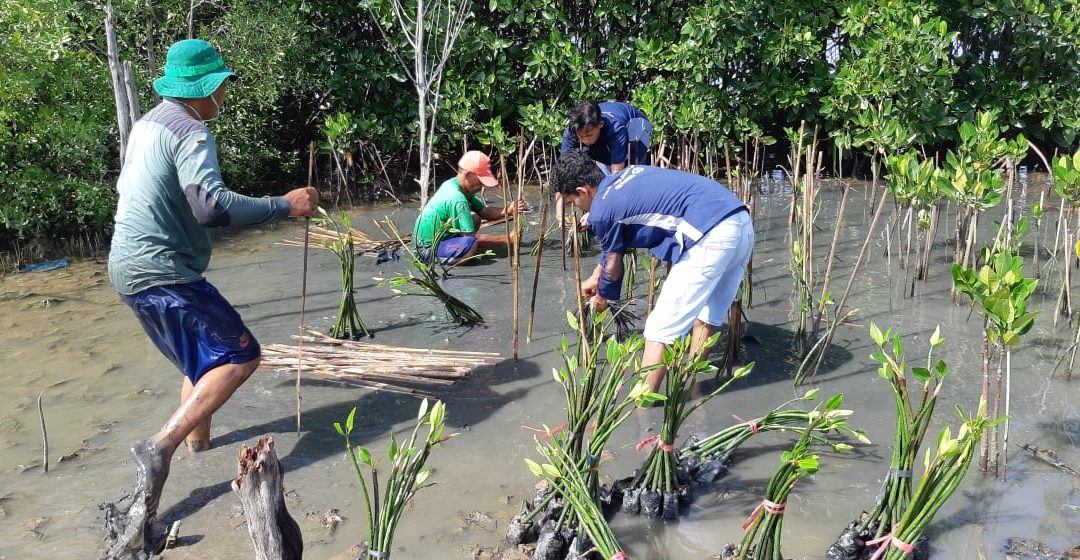 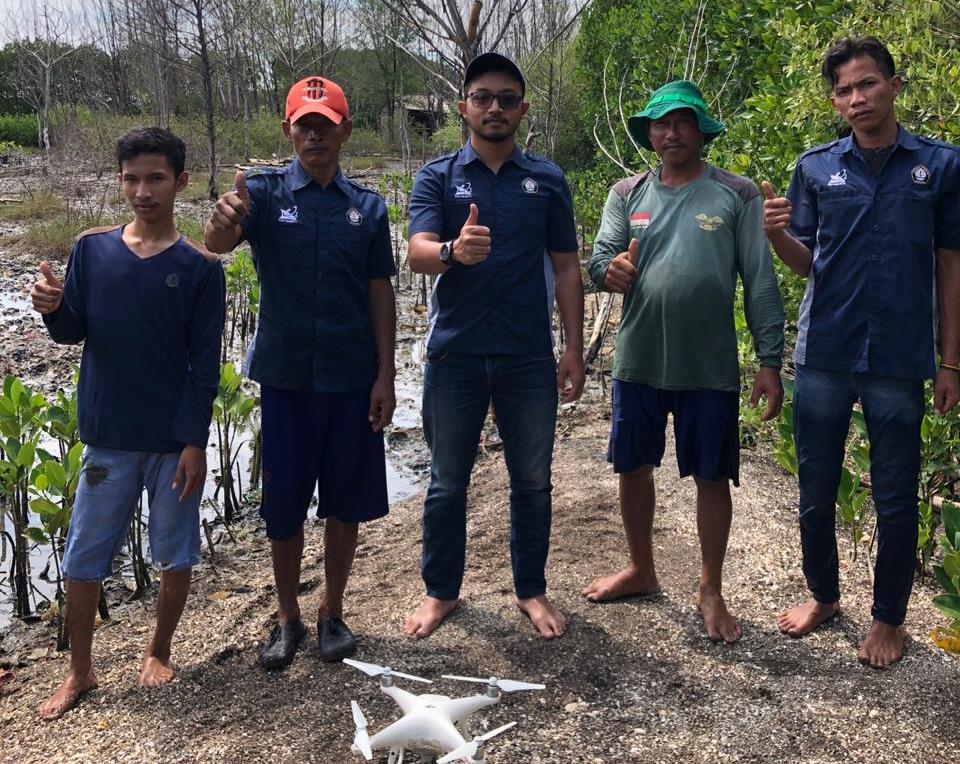 Semarang – The Science and Technology Community Service Team for Undip Assisted Villages / Tim Pengabdian Masyarakat Iptek Bagi Desa Binaan Undip (IDBU), the Department of Oceanography Faculty of Fisheries and Marine Science, Diponegoro University, is again carrying out rehabilitation activities for mangrove ecosystems in areas affected by rob and erosion in the coastal area of Tambakrejo, Tanjung Mas Village, Semarang. The event is held on Monday, September 28th 2020 together with local residents the and environmentalist community. This mangrove rehabilitation activity is a continuation of the collaboration between Pokmaswas (Cinta Alam Mangrove Asri Rimbun) Camar and the Community Service Team of Oceanography Department of Diponegoro University as an implementation of Science and Technology Program for Undip Assisted Villages (IDBU) during 2018-2020.
According to the head of the IDBU Undip Team, Prof. Dr. Denny Nugroho Sugianto, ST., MSi., this event aims to rehabilitate the coastal environment in Tanjungmas Village, Semarang – Central Java, due to tidal floods and the loss of coastlines due to erosion. As we all know, that along the coast of Semarang City, it has been recorded that over the last 20 years there has been damage (decline) of the coastline reaching approximately 1.43 – 1.74 km. This matter urges integrated coastal rescue efforts immediately. One of the efforts currently being made is through the role of universities, and Diponegoro University is applying science and technology to solve problems in society. Through the Science and Technology community service program for Undip Assisted Villages (IDBU), Diponegoro University has a significant contribution in saving the environment through rehabilitation in coastal areas. This is also in line with Undip’s main scientific pattern (PIP), namely Coastal Regional Eco-Development.
Further explanation delivered by Prof. Denny Nugroho Sugianto, this event is a form of Undip’s implementation to the government’s agenda, namely the Sustainable Development Goals (SDGs) with the goals of SDGs 13 (climate action), SDGs 14 (life below water) and 17 (partnerships for the goals ). The goals are to combat climate change and its impacts, to protect the environment, to conserve marine, oceanic, and maritime resources for sustainable development, to strengthen implementation measures and to revitalize global partnerships.
As we know, the tidal flood disaster known as rob is caused by excessive sea level rising and is causing swamp on the land surface. One of the causes is global climate change which makes the phenomenon of sea level rise about 6 to 10 millimeters per year. As felt by some residents including Mr. Amron at RW 16 Tanjungmas Regency, Semarang City, that in the last few years tides have become more frequent. Several coastal areas of Semarang have been lost due to erosion, so they need to be rescued immediately.
On this occasion, the IDBU Undip Team provides assistance for around 1000-2000 mangrove seedlings which are planted around areas affected by rob and erosion in coastal areas. This mangrove planting activity is carried out in collaboration with the Camar Pokmaswas (Cinta Alam Mangrove Asri Rimbun) chaired by Mr. Juraimi. Together with local residents, the mangrove planting activities are carried out from early morning until late evening. The residents who are coordinated by Mr. Zazid, as Secretary of Camar Pokmaswas also seemed enthusiastic about participating in this activity together with the Undip IDBU Team. According to Prof. Denny Nugroho Sugianto, one of the objectives of carrying out this activity is to increase the ability of communities in Tanjungmas Village, Semarang City in disaster mitigation in coastal areas.
According to the Head of RT 04 RW 16, Mr. Suratno, who also serves as Chairman of the Manunggal Bahari Community Supervisory Group (Pokmaswas), said that the IDBU Undip community service activity is very useful by their helps to residents in preserving the environment and coastal ecosystems. Furthermore, the head of RW 16 Tambakrejo Tanjungmas, Mr. Slamet Riyadi said that Undip’s role in solving the problems that are happening now is precise and helpful. The IDBU Undip team from 2018-2020 has consistently helped residents in dealing with the problem of tidal flooding and also improving the coastal environment.
Furthermore, added by Dr. Muhammad Helmi, Dr. Kunarso, and Dr. Anindia Wirasatriya, this activity aims at restoration and recovery of natural coastal ecosystems that are affected by erosion or abrasion. It also aims to restore the ecological function of mangroves as spowning ground areas, nursery ground and natural marine life. These restoration increase the carrying capacity of coastal areas to recover the economy sector of affected residents. Despite of the Covid-19 pandemic, Undip IDBU Team is consistently able to carry out these community service activities according to health protocols determined by the government.
Share this :