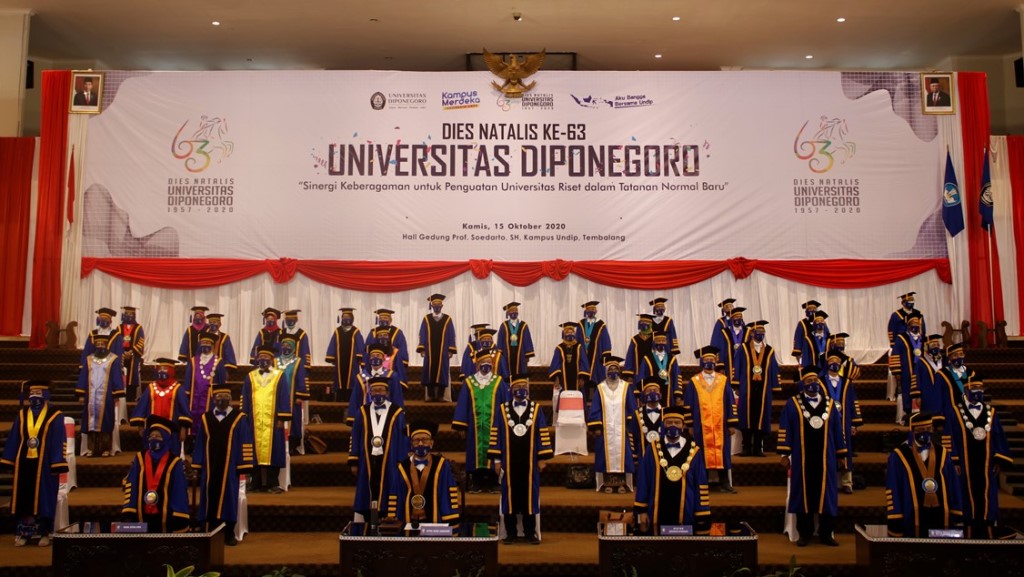 Semarang (15/10) – Today, Diponegoro University 63rd Anniversary Ceremony is held at Prof. Building Hall. Soedarto, SH, Undip Campus, Tembalang. Present at this event are the Undip Rector, Vice Rector, Chair of the Academic Senate, Deputy Chair of the Board of Trustees, members of the Academic Senate and the Board of Professors. Invited guests take part in online events via the Zoom application. The event is preceded by a video screening of Undip’s 63rd Anniversary greetings from State Officials, Regional Leaders, and fellow universities.
This ceremony is the peak of series of activities to commemorate the 63rd Anniversary of Undip. At the Undip 63rd Anniversary ceremony, presenting the Vice President of the Republic of Indonesia, Prof. Dr. (H.C.) K. H. Ma’ruf Amin who delivers a scientific oration entitled “The Use of Sharia Economic Research for the Empowerment of Coastal Areas in a New Normal Order” which is delivered online. In his scientific oration, he conveys that one of the tasks of universities such as UNDIP is to produce researchers who are able to carry out research that can provide benefits as well as have high commercial value to be able to take roles effectively.
Undip 63rd Anniversary Ceremony is opened by the Chairperson of the Academic Senate, Prof. Dr. Ir. Sunarso, MS. He hopes that with increasing age, Undip can continue applying peaceful and religious values, and become a leading university in the research and academic fields.
The event is continued with remarks from the Rector of Diponegoro University, Prof. Dr. Yos Johan Utama, S.H., M.Hum. He states that Undip has established for 63 years, and can survive because of the solid synergy of the academic community, students, lecturers, and educational staff so that it makes Undip a strong university. Undip as PTNBH is fast in responding to the government to conduct online learning, and in implementing today’s event also follows health protocols. “Undip upholds nationalism, according to the values of Bhinneka Tunggal Ika. Undip supports various student activities, such as funding for UKM and research teams, “said Prof. Yos.
Entering the age of 63, many achievements have been achieved by the academic community and Undip students, and the increasing number of professors is the result of support from Undip partners and the government. “Undip promised to help the government to maintain the unity of the nation and increase the competitiveness of the Indonesian nation in the international world, by becoming more innovative, productive, and advanced, especially in the new normal order”, he concludes.
In this event, Undip Award for Research and Innovation in 2020 is also carried out by Rector accompanied by the Chair of the Academic Senate. The categories of awards given include Lecturers with Most Copyright Owners in 2019, Lecturers with Most Patents of 2019, the Best Author in the SINTA Version 2018-2020, the Most Granted Patents in 2019. As many as 13 Undip lecturers receive the award. Undip also welcomes the New Doctorate whose names are read by the Vice Rector for Academic and Student Affairs.
Undip express gratitudes to all parties who have supported Undip’s progress to become a superior research university. Reaching this 63rd year, Undip hopes that in the future it can contribute more to the development of science and technology in Indonesia.
Share this :