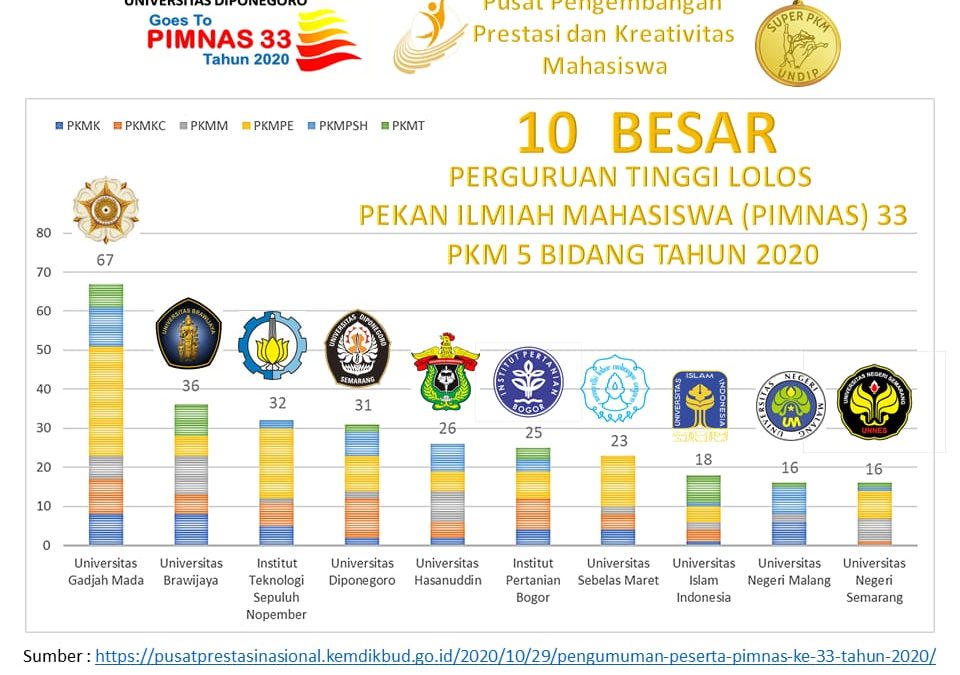 SEMARANG – As many as 31 scientific works of Diponegoro University (UNDIP) students entered the final round of 33rd National Student Scientific Week (PIMNAS) 2020along with scientific works of selected students from all universities in Indonesia. Furthermore, 31 teams of Undip students must compete by presenting their proposals in front of the jury to be the best in this scientific competition for Indonesian students on November 24-29 2020.

According to the publication of the National Achievement Center (Pusat Prestasi Nasional) of the Ministry of Education and Culture, in 2020 there were as many as 65,000 proposals of Students Creativity Program (Program Kreativitas Mahasiswa/PKM). From a series of selection processes conducted by the Directorate of Learning and Student Affairs (Direktorat Pembelajaran dan Kemahasiswaan) of the Directorate General of Higher Education, Ministry of Education and Culture, there are 625 proposals from 101 universities that entered the final stage of PIMNAS 2020, of which 31 proposals from UNDIP students entered the final. It made public universities in Semarang City to be the fourth largest university to be included in the 33rd PIMNAS final.

UNDIP Vice Rector 1 for Academic and Student Affairs, Prof. Budi Setiyono, Ph.D., reveals that in the initial selection process 700 proposals are sent from the Diponegoro Campus. Of that number, 128 student proposals are selected to get funding from the Directorate General of Higher Education. The details are 58 research proposals, 31 community service proposals, 7 entrepreneurship program proposals, 4 technology proposals and 14 copyright proposals. In the final stage, 31 proposals from UNDIP students passed the 33rd Pimnas.

“Of course we are grateful for the achievement of the students. Our job is to continue supporting and assisting students in achieving the best positions in the 2020 PIMNAS event. We continue to carry out evaluations and mentoring as much as possible”, said Prof. Budi Setiyono, Ph.D., on Monday (2/11/2020).

According to Prof. Budi, the dynamics in PIMNAS make the lecturers who are the companions have to be careful in guiding and motivating their students. He hopes that all parties involved in this program do their best, and can be open to each other for improvement and refinement. “This is a learning process, the dynamics must also be understood”, he added.

For the final stage, based on data on the https://simbelmawa.kemdikbud.go.id/ page, each team will be evaluated by an Assessment Team selected by the PIMNAS 2020 organizer. The assessment is carried out on participants including online presentations, posters, final reports, and outputs in the form of articles. The articles are complete narrative review (PKM-P) or a complete activity video in accordance with the PKM field.

Each Student Scientific Work Team who enters the PIMNAS final will be given 30 minutes each, the allocation of which is 5 minutes for preparation, 10 minutes of presentation time and showing related evidence, and 15 minutes for question and answer, discussion, and clarification of the results of the activity.

Here are 31 lists of proposals from UNDIP students entered the final of the 33rd PIMNAS in 2020.