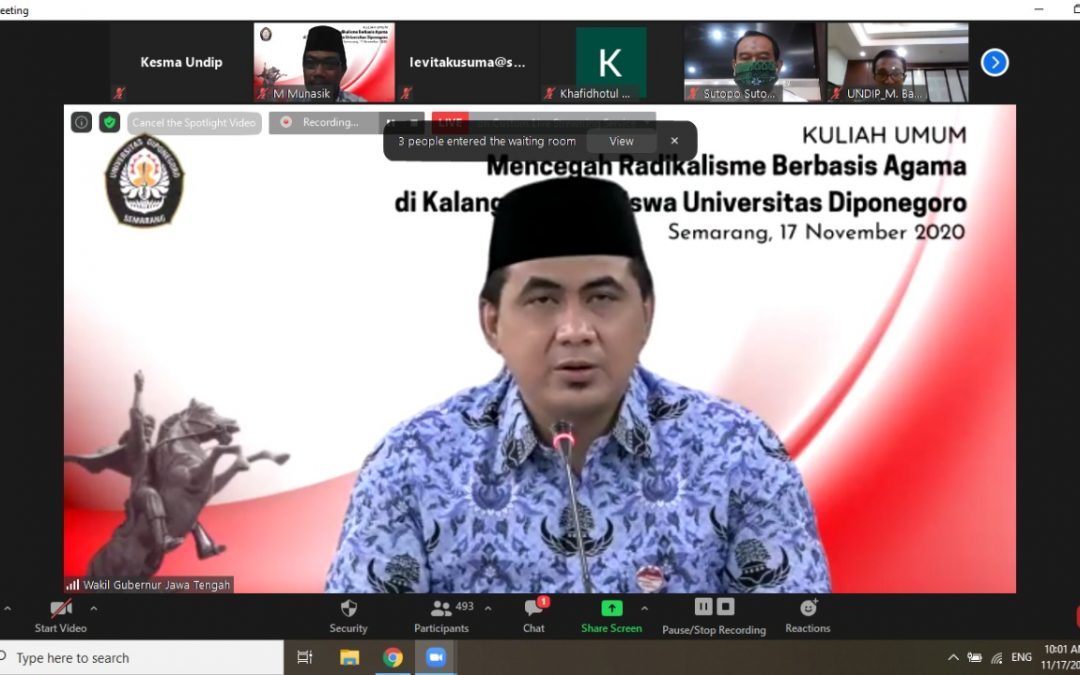 Radicalism, which is a radical concept that aims to make political changes carried out in an extreme manner, should not grow in a nation with nationalism. However, this concept is a latent danger that can arise at any time so that it is necessary to provide understanding and learning for Indonesian citizens to stick to their stance and to not follow radicalism. As a Legal Entity State University (Perguruan Tinggi Negeri Badan Hukum) in Indonesia that upholds the value of nationalism, Diponegoro University has conducted a National Ideology Strengthening Program for the entire academic community. The latest program is “Public Lecture: Preventing Religious-Based Radicalism among Diponegoro University Students” which is held on November 17th 2020 live via Zoom and Youtube applications.
At the event organized by TIMARU (Tim Anti Radikalisme Undip) / Undip’s Anti-Radicalism Team, present as presenters are Gus Taj Yasin Maimoen who served as Deputy Governor of Central Java, and Ir. Sutopo M.Sc., Ph.D. who is a lecturer at Faculty of Animal Husbandry and Agriculture Undip. The moderator of this event is Dr. Ir. Munasik, M.Sc., lecturer at Faculty of Fisheries and Marine Sciences, Undip. The event is opened with remarks from Undip Rector, Prof. Dr. Yos Johan Utama, S.H., M.Hum. He said that a sense of unity and oneness must be instilled in every human being from an early age. Indonesia, which is a multicultural country, has many religions, and religions should lead to mutual respect, mutual love, not mutual hatred. “Tolerance is important. We reject radicalism that carries religious jargon, which can cause disputes between citizens who have different religions. We are all one, the citizens of Indonesian nation”, said Prof. Yos in his speech.
The Deputy Governor of Central Java, Gus Yasin, revealed that today there are some religious leaders who convey teachings that are different from those of the original religion. “Religion is true, its fanaticism that needs to be avoided”, said Gus Yasin. Viewed from a religious perspective, the seeds of radicalism can emerge when there is a feeling of fanaticism towards one group or one perspective thought. He explained that the emergence of seeds of radicalism must be prevented, and as Indonesian citizens we must obey a nationalist government. Strong religion can be the basis but tolerance can go hand in hand. “Bhinneka Tunggal Ika unites differences in Indonesia. Allah created many different people, but differences are a blessing”, concluded Gus Yasin.
The next material presented by Ir. Sutopo with the theme “Efforts to Prevent Radicalism in Higher Education Campuses”. He explained that students are a target that is prone to be exposed to radicalism, since the spread of ideology requires smart people and students are looking for identity so that they have a desire to become big. The characteristic of radicalism that must be hostile to is actions that feel the most righteous and can harm others, for example the suicide bombing jihad.
Undip prohibits things that are against the Pancasila ideology. The formation of TIMARU really helps students so they do not get trapped in misleading and harmful mentoring. Undip does not support students, faculty, or alumni who are affiliated with radicalism. With the Ideology Strengthening Program in form of a public lecture attended by the academic community and Undip students, it is hoped that it can increase a sense of nationalism and uphold the unity and integrity of the Republic of Indonesia.
Share this :