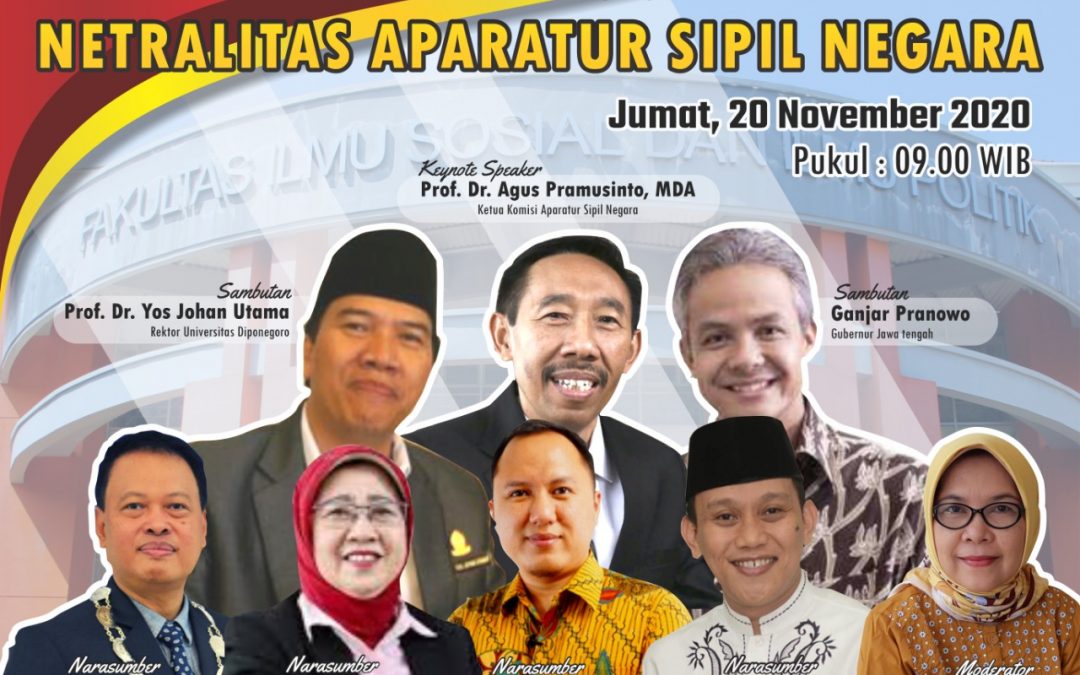 Diponegoro University in collaboration with State Civil Apparatus Commission and IAPA (Indonesian Association for Public Administration) or known as Indonesian Association of State / Public Administration Sciences holds a socialization of ASN (Aparatur Sipil Negara) / State Civil Apparatus Neutrality in a webinar with the theme “Building Indonesian Meritocracy and Democracy” at Faculty of Social Science and Political Science Undip auditorium, on Friday (20/11). Present at the event are Undip Rector, Prof. Yos Johan Utama, S.H., M.Hum., Dean of the Faculty of Social Science and Political Science, Dr. Hadi Wasono, and more than 300 participants from the provincial, municipal and regional governments in Central Java.

In his speech, Undip Rector Prof. Dr. Yos Johan Utama, SH., M.Hum. said that the campaign patterns this year would be much different due to Covid-19 pandemic. ASN is demanded to be committed to the nation by obeying the existing laws and regulations that currently underlie ASN related to neutrality in politics. Prof. Yos revealed that a strong, accountable, and objective meritocracy is the key to prevent ASN involvement from moving in politics.

“Neutrality is not only during the campaign period, but the neutrality attitude of ASN must be instilled from the start when they are just inaugurated so that there is no indication of participation in the campaign”, said Undip Rector.

Meanwhile, representative from DPP IAPA, Drs. Muh Aziz Muslim, M.Si. said that this seminar is held several times in various areas of cooperation between the State Civil Apparatus Commission and IAPA as a form of ASN neutrality. The neutrality of an ASN needs to be applied not only in the regional elections. The commitment to neutrality of ASN must become the understanding of all parties from the political sector. “Hopefully ASN can become a trustworthy employee for the country and the nation”, said Aziz.

The Governor of Central Java’s remarks represented by Plh. Central Java Regional Secretary, Ir. Dyah Lukisari, M.Si said that a regional election with good quality is the beginning of a good democratic life of a country and a state with neutrality from ASN. ASN is considered to be in the spotlight that must be neutral because a large number can become a supporter of one of the political incumbents. Dyah revealed that ASN is currently under the umbrella of good regulations to bind itself to ASN code of ethics to be loyal in serving the community and government without having to look at political references on themselves.