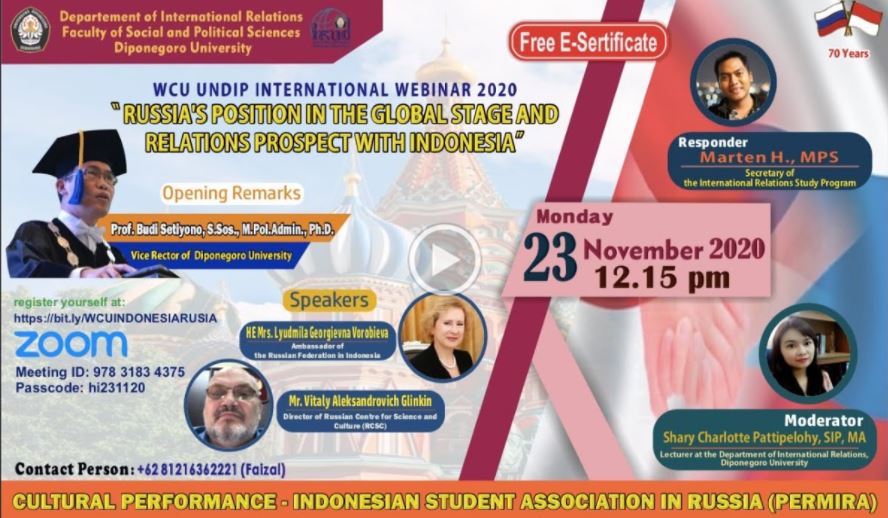 In order to get to World Class University, Department of International Relations of Diponegoro University held an International Webinar 2020 with the theme “Russia’s Position In The Global Stage and Prospect of Relations with Indonesia” on Monday, November 23th 2020. This theme is taken in commemoration of the 70th year of diplomatic relations between Indonesia and Russia. The presented guest speakers in this event are HE Lyudmila Georgievna Vorobieva (Russian Ambassador to Indonesia) and Vitaly Aleksandrovich Glinkin (Director of Russian Cultural Center), while the responders are Marten Hanura, MPS (Secretary of International Relations Study Program).

The representative of Undip Rector, Prof. Budi Setiyono, Ph.D, in the opening of event said that Russia is one of the big countries in the world collaborates with Indonesia, which is a rising power in Asia. Especially Undip as one of the big universities in Indonesia always try to develop cooperation in the fields of teaching, research, and student exchange.

Marten Hanura, MPS (secretary of International Relations Study Program) said that Russia is one of the countries that has many roles in the international organizations such as United Nations, WTO, APEC, G8. Russia also has great impacts on regional organizations and contributes well in handling Covid-19 pandemic. Marten asked the guest speaker whether Russia want to restore its domination as a super power like 1990 or not,  and about the importance of Indonesia to Russia.

HE Lyudmila Georgievna Vorobieva (Russian Ambassador to Indonesia) stated that in foreign policy, Russia does not pursue a super power since this concept makes a dominant country in the whole world, but instead Russia supports multilateralism where large and small countries have an equal position and and have the right to respect their national interests. Russia also develops inclusive security, means the security of a country is not determined by other countries. Meanwhile, Indonesia is very important for Russia as a key partner not only in Southeast Asia but also in Asia Pacific since Indonesia has considerable influence in those region.

Vitaly Aleksandrovich Glinkin (Director of Russian Cultural Center) said that Russian Cultural Center is one of Russian institutions in Indonesia which has a mission for cooperation in the fields of humanity, research, education, and culture with the Indonesian government. The collaboration aims to better understanding between the two countries in order to increase further cooperation in many more various fields.

Apart from the webinar discussion, the event also features cultural performances by Indonesian Students in Russia (Permira) in collaboration with Russian students by singing the song ‘Rayuan Pulau Kelapa’ which is translated into Russian entitled ‘Ostrova Palm’, and reading of Russian poetry.