SEMARANG – Semarang Batik has a long history, distinctive patterns and its own uniqueness, so it is worthy to be developed and recorded as a cultural heritage. A historian of Faculty of Humanities Diponegoro University (UNDIP), Prof. Dr. Dewi Yuliati, M.A. said that the existence of Kampung Batik in Bubakan or Jurnatan area is an indication that batik crafts have grown and developed in Semarang since this area became a city.

In Java it is customary to name the village (toponym) around the centers of power based on the livelihood or profession of its citizens. In the vicinity of Bubakan, which is the center area of ancient Semarang government, besides there is Kampung Batik where batik craftsmen live and do activities, there are Pedamaran Village as a trading place for damar resin as dye for batik, Sayangan as a center for craftsmen of household tools made of bronze, and Petudungan as a place for Asian conical hat craftsmen and others.

“The existence of Kampung Batik and Pedamaran is an indicator that batik craft industry has taken root in Semarang,” said Prof. Dewi Yuliati, who has conducted several historical studies of Semarang since its development in the middle of 16th century to 20th century. 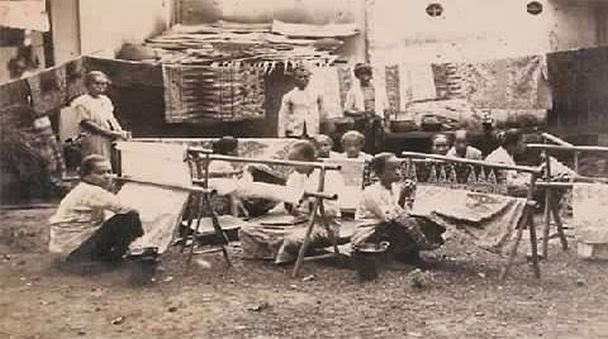 This professor of history from History Study Program Faculty of Humanities Undip revealed that information about Bubakan as the center of ancient Semarang government is contained in Serat Kandhaning Ringit Purwo KGB manuscript No. 7, which told that in 1476 Ki Pandan Arang I had settled on Tirang Island. The incident was marked by candra sengkala Awak Terus Cahya Jati. Then Ki Pandan Arang opened a new settlement in coastal area, and according to traditional story the place was named Bubakan, derived from the word “bubak” which means to open a plot of land and make it a place of settlement.

Regarding the name of the area which is called Jurnatan, according to Dewi, it is also related to its existence as the center of government. Jurnatan is thought to be where Ki Pandan Arang I served as an “juru nata” or interpreter (royal official) under the rule of Demak Kingdom. Because it became the residence of interpreter, then the place was known as Jurnatan. The position of Kampung Batik is an inseparable part of the center of power, namely as a provider of clothing needs for the rulers, government employees, and the community.

Semarang batik, she said, does not have a standard motive. However, its products can be recognized from the use of naturalist and realistic motifs such as peacocks which symbolize beauty and family protection, storks as symbols of harvest and prosperity, roosters as symbols of masculinity, and butterflies which symbolize beauty, fertility, and the hope of reaching a position that is high. Other motifs are fish as a symbol of maritime affairs, tamarind leaves which are believed to be the beginning of Semarang’s name, bamboo trees as a symbol of ease of life, hills as a symbol of Semarang’s city, and sea as a symbol of maritime.

From the existing records, in the 19th century it is known that there were two Indo-European women who entered batik industry in Semarang. Mrs. Oosterom and Mrs. Von Franquemont have made batik with 59 motifs, including the figures of wayang, dragon, Dewi Shih Wang Mu and the peach tree, and garuda bird. There is also a sarong with “isen-isen” fish motif.

The heyday of Semarang batik occurred in the early 20th century, which can be seen from the large number of indigenous people who rely on their livelihoods in the batik craft industry sector. This was recorded in report of Dutch colonial government about the existence of industries in various residencies in Java. In the period 1919-1925, the number of businesses in batik craft sector in Semarang grew in terms of number of business units and their workforce. In the Notes of Coloniaal Verslag in 1919, in Semarang there were 25 batik industries with 58 skilled workers and 176 manual workers, while in 1925 the number of industries was 107 companies with 491 skilled workers and 317 manual laborers.

This development of batik industries was related to World War I which halted textile imports from India, the Netherlands and England. Local products must fulfill clothing needs, and batik is one of the choices. However, the entry of Japan in 1943 destroyed everything, Kampung Batik became one of the targets of arson.

Indeed, there are still batik companies that have survived, and flourished until the 1970s, such as “ASACO” and Tan Kong Tien Batikkerij owned by Chinese businessman Tan Kong Tien who was married to a descendant of Hamengku Buwono III, Raden Ayu Dinartiningsih. Tan Kong Tien is one of the sons of Tan Siauw Liem, a landlord and major in Semarang, whose land wealth covers the Bugangan to Plewan area of 90 hectares. He obtained his batik skills from his wife, who is a relative of royal family of Yogyakarta palace.

Batik Semarangan rose again with a training in 2006 which was initiated by researchers from the Department of History, Faculty of Humanities Undip and supported by Semarang City government. In the early days of Mayor Hendrar Prihardi’s leadership, he encouraged the revival of Semarang batik as a cultural identity. “In conditions like now, more concrete assistance is needed. Apart from mentoring and training, capital assistance and promotions are very important. Moreover, if Semarang Batik can be used as a uniform in Semarang City Government, Semarang Batik craft industry will definitely grow again,” hoped Dewi Yuliati.