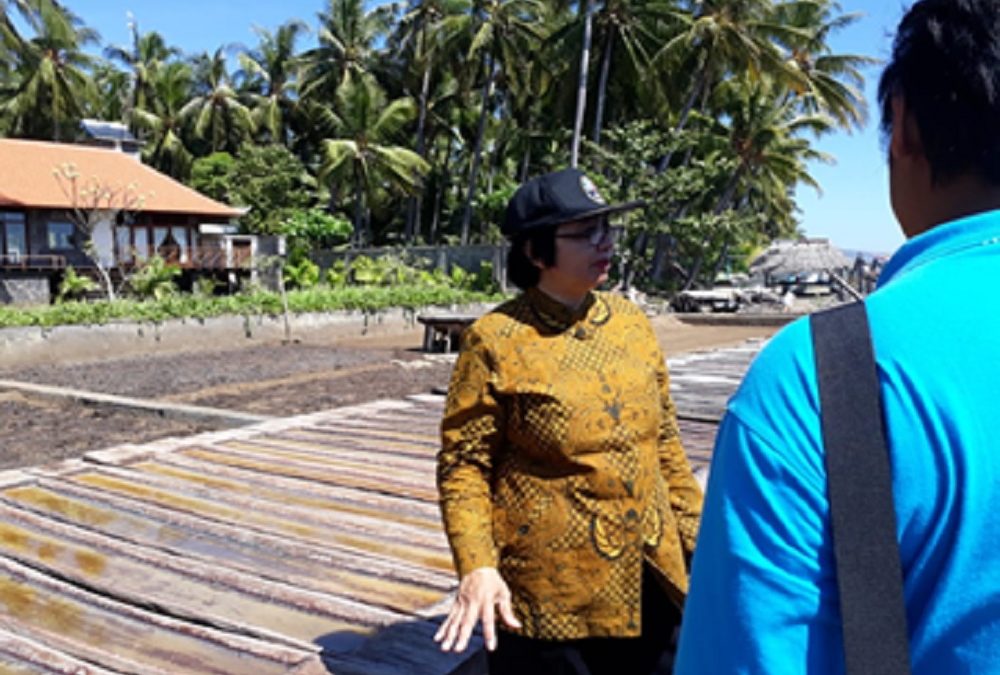 SEMARANG – Sociology and maritime history expert from Department of History, Faculty of Humanities Diponegoro University (UNDIP), Prof. Dr. Yety Rochwulaningsih M.Sc., stated that community’s salt business has strong historical roots and it is worthy to be developed. Salt business of the people has great potential as a support for national economic growth and people’s welfare.

This historian who has conducted several studies on salt business revealed that salt is important as a food ingredient as well as a strategic trading commodity which has actually existed and grown since the pre-colonial era and continues to exist today. “Even in the future, salt business will still exist and it is very much needed for both consumption and industry,” said Prof. Yety Rochwulaningsih, on Thursday (1/4/2021).

Besides being supported by the potential of natural resources, namely geographic and climatological resources, the existence of salt business is also supported by human resources who have empirical experiences which are passed down from generation to generation. The salt business in several areas has even become the culture of the community and main source of income. In the context of resources, Yety believes that if properly managed, salt business has a high comparative advantage to compete in national and international markets.

Responding to the issue of importing salt, especially for industrial needs as the majority needs nationally, the professor at Master of History Study Program and the Doctoral Program in Department of History, Faculty of Humanities Undip suspected that there is lack of transparency and accuracy in presenting data on their needs and qualifications, so that raw materials of salt cannot be cultivated by farmers. It causes increase of need of salt and open a wide field of business for the importers. In essence, there are structural problems that hinder the development of community’s salt business, especially the market access to industry, so mediation is needed with industries that need salt, completed with transparent and accurate data on volume and its qualifications.

She hopes that the government will be more intense in fostering community’s salt business because this business is at the forefront in the context of national food resilience, especially salt. The effort done by the government since 2011 with Community Salt Business Empowerment Program (Pemberdayaan Usaha Garam Rakyat / PUGAR) is in line with the goal, but it needs to be intensified, especially to change the mindset of salt farmers. Yety, who is an expert in PUGAR Program of the Ministry of Marine Affairs and Fisheries hopes that studies on innovation and technology development for community’s salt business will always be accompanied by a change in the mindset, so that salt business becomes more efficient, qualified and becomes a strategic commodity that can improve the welfare of salt farmers in particular, and coastal communities in general.

The great potential in the context of natural resources can be seen from the presence of salt fields in Indonesia covering an area of 68,754.16 hectares located in nine provinces ranging from Nanggroe Aceh Darussalam, West Java, Central Java, East Java, Bali, West Nusa Tenggara, East Nusa Tenggara, South Sulawesi, Central Sulawesi, Gorontalo, and North Maluku. Most of the production techniques still use traditional evaporation and rely on nature, so there are limitations related to the season. “With intensification, technological innovation, and change in the mindset of salt business management, there will be significant changes in salt business sector as a strategic and potential trading commodity,” said Yety.

Even though it is still limited, the community’s salt production still plays a role in maintaining national economy. In fact, in the midst of import pressures, there are still certain salt producers such as ‘trough’ salt in Bali that can export their products to several developed countries such as Japan, America, France, etc. “Indonesia can actually export salt. I am sure that with the joint commitment, especially commitment of the government and the  people, Indonesia with self-sufficiency in salt both consumption and industry can be realized in the future,” she concluded.