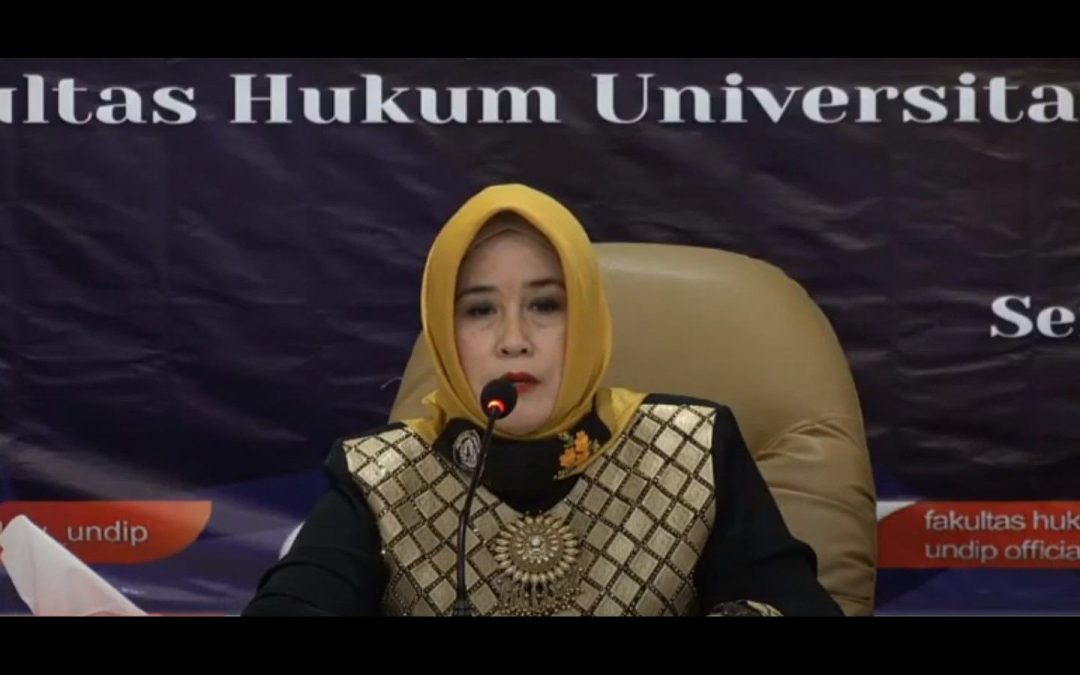 Semarang – In a long history of Faculty of Law Diponegoro University (UNDIP), the name Prof. Dr. Retno Saraswati, S.H., M.Hum. is recorded as the first woman to be a Dean. This is the first time since Faculty of Law as the oldest faculty in Undip was born in 1957, after being established by Mr R Soebijono Tjitrowinoto, the first Dean of Faculty of Law, the 17th Dean is a heroine who appeared to open a new history.

Retno Saraswati, a woman who was born in Kendal on November 19th 1967, is now on the list with several figures who have become legends at Diponegoro University. In the list of names of Undip Faculty of Law Deans, there are several big names who later became Undip Rectors. Among them are Prof. Soedarto, S.H.; Prof. Dr. Muladi, S.H.; and Prof. Dr. Yos Johan Utama, S.H., M.Hum. There are also those who take part at the national level, such as Prof. Muladi (Ministry of Law and Human Rights and Ministry of State Secretariat); Prof. Mr Soenario (Minister of Foreign Affairs) and Prof. Dr. Arief Hidayat, S.H., M.S. (Chair of the Constitutional Court).

Despite being the first woman as Dean, Undip academic community welcomed the event when this constitutional law expert was appointed as Dean of Faculty of Law by Undip Rector, Prof. Dr. Yos Johan Utama, S.H., M.Hum. on Tuesday (8/5/2018). Retno continued her senior leadership since Prof. Dr. R Benny Riyanto, S.H., M.Hum. CN received a new role as of April 4th 2018 as Head of Research and Development Agency at Ministry of Law and Human Rights. Her colleagues assessed that her work in this leading state higher education institution was quite a lot so that she deserved to be the number one person in Faculty of Law Undip.

Prof. Retno has been teaching since graduated from Faculty of Law Undip in 1992, then continued her studies at Undip Master of Law Program and graduated in 2001. She completed her doctoral studies in 2011 at Law Doctoral Program of Faculty of Law Undip. This alumni of Sedes Sapientiae High School Semarang was inaugurated as a professor, the highest academic title, at her alma mater on April 23rd 2016.

She has worked in various positions. Among them are Head of Undip Law Masters Study Program (2013-2015) and Assistant Dean I of Faculty of Law Undip (2015-2018). Besides teaching, Prof. Retno, who also has the qualifications as a legal drafter, is also active as speaker at seminars and discussions about law.

She also has a very large number of scientific works, almost a hundred scientific publications that she has produced. In 1996, when New Order was still in power, she had written about “The Meaning of Constitution in Limiting the Power of Indonesian State Government” and “Infra-Structural Relationship with Supra Structures to Achieve State Goals”. Most recently, in 2020, Retno and Tanjung wrote in a manuscript of Judicial Journal entitled “Single Candidates for Regional Head Elections Reducing the Quality of Democracy”.

In international scale, she examined Natuna’s position through scientific work with AL Tienh, A Ristyawati, A Soemarmi, with the title “The National Defense Strategy under the Regime of the 7th President of Indonesia to Protect the Exclusive Economic Zone of the Natuna Sea Overlapping with China’s Nine-Dash Line” published in Aquaculture, Aquarium, Conservation&Legislation on 2020.

Regarding higher education of law studies, Prof. Retno straightforwardly said that the development of digital technology which has disrupted almost all fields, should be a new understanding that requires real follow-up. In the context of educational institutions, Faculty of Law Undip continues to update legal conceptions and thoughts related to digital technology and its implications. It also collaborates with various parties to find solutions so that there is legal certainty for people who use digital technology.

“Digital technology is not just E-Court, which includes case registration services, information on estimated down-payment of court fees, as well as methods of payment and summons made by electronic and online channels. Moreover, it is also regarding the validity of electronic evidence, electronic validation of agreements, and technology-based public services. Therefore, we must be able to prepare a curriculum so that our graduates are not only competent in understanding law but also have an understanding of digital culture,” she said.

Legal education has to adapt a lot to technological developments. Legal concepts regarding agreements, sale and purchase, leasing, labor relations, and the mode of crime developed in such a way that it became a challenge for the academic community. The ones who have to adjust are not only practitioners and students, but also managers of law colleges.

In the education and lecture system, due to the Covid-19 outbreak, lectures must be done online. The consequence of online lectures is a change in the attendance system, examination procedures and other academic activities, such as taking courses and arranging papers which are also carried out online. “Undip has facilitated online academic activities using Single Sign On or SSO technology, so that it is easier for us to adjust with online lectures system,” she stated ending the conversation. (PR team)