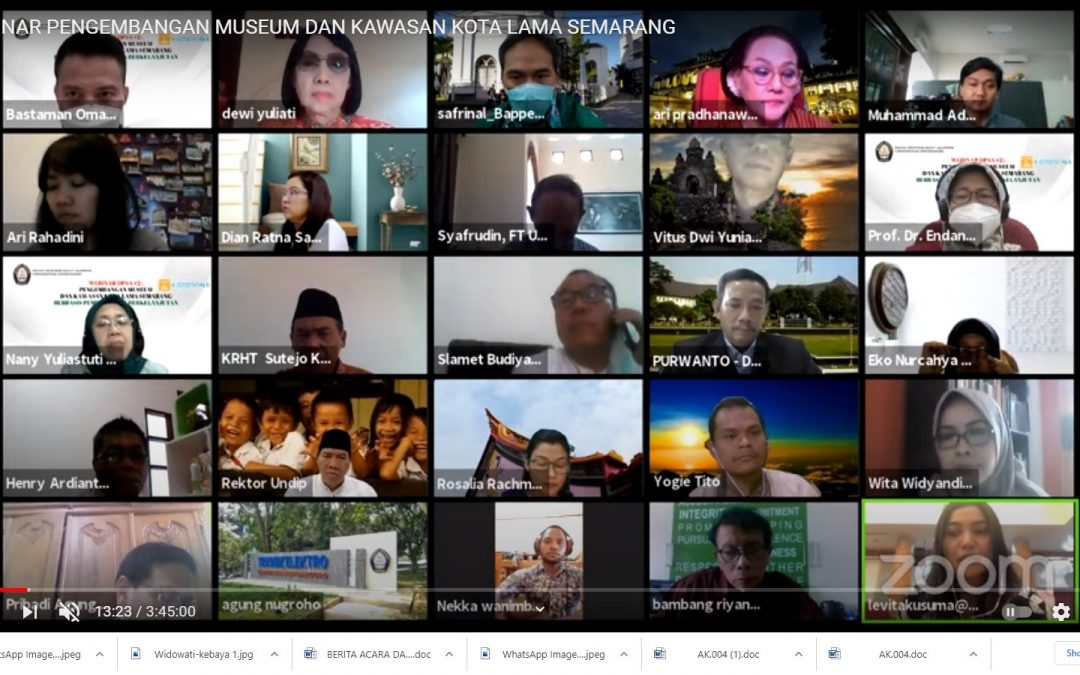 SEMARANG – The Board of Professors of Academic Senate of Diponegoro University (UNDIP) contributed ideas of sustainable development of Semarang Old Town area through webinars presented some professors and competent figures. Besides the resource persons, many professors were actively involved in the webinar with the theme “Development of Museum and Semarang Old Town Area based on Sustainable Development” which was held on Friday (16/4/2021).

Undip Rector, Prof. Dr. Yos Johan Utama, S.H., M.Hum., when giving a speech and opening the event emphasized that Undip’s Board of Professors should have been involved in decision making of strategic matters. The duty of Board of Professors, said Yos Johan, is indeed to discuss strategic matters at the local, national and international levels. “Undip is also called upon to study the strategic topic of sustainable development of Semarang Old Town area as input to the government. There must be a road map so that the successors can continue,” he said.

According to him, Undip must always work together with Semarang City Government and existing stakeholders. Honestly, this Professor of Constitutional Law admits that the high interest in entering Undip is one of the supporting factors of perception that Semarang City is very suitable to be a place to study, because it is calm, there are no riots or big demonstrations.

The conduciveness of Semarang City also supports Undip to be continuously included in the ranks of The 5 Best and Most Favorite State Universities in Indonesia. Semarang continues to grow into a place to gain knowledge that can compete with other cities.

Meanwhile, Chairman of Undip Board of Professors of Academic Senate, Prof. Dr. Ir Purwanto DEA, assessed that Semarang Old Town has developed into a magnet for tourists. Physical, infrastructure and cultural improvements are significant assets in its development. Prof. Purwanto hopes that this webinar will generate constructive input for the sustainable improvement and development of Semarang Old Town.

In the discussion guided by Secretary of Commission C of Undip Board of Professors, Prof. Dr. Dra Ari Pradhanawati, MS; The Mayor of Semarang City, Hendra Prihardi, stated that the revitalization of Semarang Old Town area is the result of the contributions of many parties. The area that was originally slum and gloomy since many building owners abandoned it because of flood, is now more open and bright.

Hendi – the nickname of Mayor of Semarang City, revealed that only about 10% of building owners in Semarang Old Town area occupy the building mainly because the area is prone to flood. Therefore, when the revitalization is carried out, the first target is flood management. As a result, during the period of 2013-2020, Semarang Old Town, which included Little Netherlands, Kampung Melayu, Kampung Kauman and Chinatown, were spared from flood. “There are significant changes. The area that were originally gloomy slum has now become more open and brighter,” he said.

Meanwhile, Director General of Culture of Ministry of Education and Culture, Hilmar Farid, Ph.D, who is also Chair of Indonesian Historian Society (2016-2021), stated that a strategy which is relevant to Semarang Old City is Historic Urban Landscape. In this concept, the existing buildings are seen as a whole as a single landscape. Holistic and integrated approaches between stakeholders are used to achieve the goals of cultural, social and economic preservation for sustainable urban development.

Professor of Faculty of Engineering Undip, Prof. Dr. Ir. Erni Setyowati, M.T., in her presentation concluded that there are 6 variables in the development of Semarang Old Town, namely history, direction and government policies, position in the city space structure, building maintenance / artifacts, identity of corporation that the City Government collaborates with many stakeholders in one packaged and managed system by City Government, as well as the concept of area sustainability. Sustainability parameters include enhancement of land ecology, movement and connectivity, water management and conservation, solid and material waste management, community welfare strategies, energy savings in buildings and area development innovations. The implementation of development should use experts who are Greenship Associate certified. (PR team)