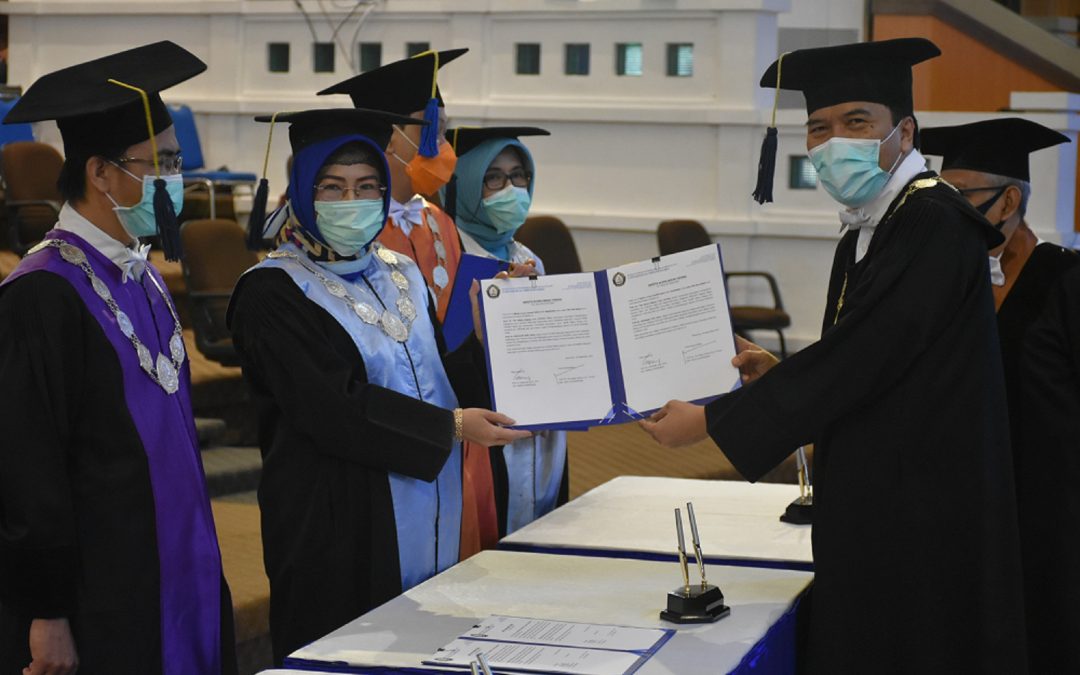 SEMARANG – There are not many people know that there is a similarity between Prof. Dr. Widowati S.Si., M.Si. with President Joko Widodo. Both have the same term of office, in 2015-2019 and 2019-2024 periods. His term of office will also end in 2024, although Prof. Wiwied – as she is usually called, will end her term in April, while President Jokowi’s second term will end on October 2024.

“A simple math game is often used in public discussion, interesting isn’t it?,” said the Professor of Mathematics at Faculty of Science and Mathematics Diponegoro University (UNDIP), half jokingly. As a person who studies mathematics, she hopes that mathematics would not make anyone frown when learning it. “Mathematics is fun,” she added.

Being the Best Graduate of Diponegoro University Undergraduate Program in 1993, Widowati then served at her alma mater as a lecturer in a study program which at that time was still named Mathematics Department at Faculty of Mathematics and Natural Sciences Undip. Her love for mathematics encouraged her to study further by taking a Masters in Mathematics at Bandung Institute of Technology (ITB) and earning a Master of Science degree in 2000. Without wasting her time, one year later she continued to doctoral level and graduated as a Doctor of Mathematics from ITB in February 2005.

Returning to campus which is her alma mater as well as her place of service, besides intensely carrying out Tri Dharma of Higher Education by teaching, researching and doing community service, the owner of Scopus ID: 8255360300 and Orchid ID: 0000-0002-4372-6501 is also actively writing in scientific journals. She has produced many books and manuscripts. “However as academics we must continue to write and research,” she stated.

Even when her career path in structural positions is starting to appear, this figure who has produced dozens of scientific publications and books still continues to carry out her role as an academic by writing and conducting research. The result of her perseverance is achieved on May 10th 2014 when Widowati was confirmed to be a professor at Faculty of Science and Mathematics Undip. The Professor’s Decree is released on February 1st 2014.

Professorship is a status that all academics strive for because it is the highest achievement. “I am grateful to be able to reach the level of professor. This title is not only recognition but also contains responsibility,” said Prof. Wiwied.

With a good career, she did not forget her nature even though she had obtained a high education and career. A good career is an added value for women to be smarter in time management for career, household, and social activities. Everything must be balanced and harmonious.

“I hope that young Kartini will be born, women can continue to be motivated, creative and innovative to work with all their heart, energy and mind in order to advance this nation so that it can be equal to developed countries. Our responsibilities also to maintain national character and insight of Indonesia,” she explained.

Another big moment occurred on April 16th 2015. Less than a year after getting the title of professor, Prof. Dr. Widowati, S.Si., M.Si. inaugurated as Dean of Faculty of Science and Mathematics by Undip Rector, Prof. Dr. Yos Johan Utama, S.H., M.Hum. Prof. Wiwied replaced her senior, Prof. Dr. Muhammad Nur, DEA who is known as a plasma physicist.

During the inauguration, Prof. Yos Johan asked as the new dean, Prof. Widowati, to bring Faculty of Science and Mathematics Undip to be better and able to produce a lot of scientific research. “I hope Prof. Widowati can carry out this mandate well so that it will lead to success,” said Undip Rector when giving the mandate.

Prof. Yos as Rector reminded that Undip has to be more excellent and become a reference for other higher educations. “This means that we must be able to be referred by the community and other universities in order to indicate that we are truly qualified in implementing Tri Dharma of Higher Education. The successful rate can be seen from terms of education, research work, scientific productivity, and community service,” he said.

Considered to be successful in leading a faculty that accommodates knowledge that has a serious and difficult connotation, Prof. Wiwied won the trust to continue her leadership at Faculty of Science and Mathematics Undip which currently manages 11 study programs, both undergraduate and postgraduate levels.

Leading a faculty with scientific fields that are seen “in the heavy category” requires a willingness to teach and popularize mathematics and natural sciences, including computer science / informatics and statistics to the wider community. Moreover, she undertook various activities such as being a mathematics jury at competition and being public lectures for mathematics students and students from other study programs on various campuses. In addition, Prof. Wiwied is also active in carrying out activities such as being an external examiner for dissertations from various universities and being a resource person for various workshops.

As a professor of mathematics, she always states in forums that mathematics and natural sciences are not only important, but interesting and useful to learn. If mathematics can be maximally applied, the community and even the government will be greatly assisted in improving the nation’s economic and social qualities.

The responsibility of lectures manifested in the publication of scientific works and research, as well as by producing copyrights and patents that mark inventions that can be produced and are beneficial to community. There are as many as 20 Intellectual Property Rights (copyrights and patents) that have been granted. Some of them are copyright for “Discrete Control Methods: Theory and Its Simulation” registered under number EC00201930579 No. IPR: 000135539; and Prof. Wiwied together with her team has produced a patent in form of “Double Net Roller for Multi-storey Floating Net Cages” which has a registration number PID201903866; simple patent of “Crystallography Canting Stamp” with Registration number: S00201605160 and IPR No.: IDS000001908.