Message from UNDIP Rector: Professors Have to be Careful in Using Social Media 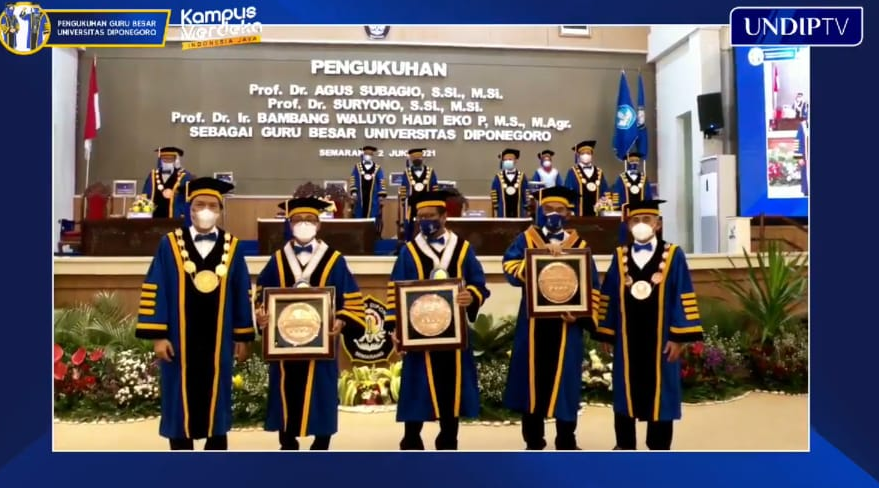 SEMARANG — The Rector of Diponegoro University (UNDIP), Prof. Dr. Yos Johan Utama, S.H., M.Hum., said that professorship is the highest position in an academic degree. However, the true meaning of a professor does not come from the title itself but from what the person can do.

“The main crown is the ability of the professor to produce great works for the benefit of mankind and the universe,” said Undip Rector when giving a speech at the inauguration of three professors at the Prof. Soedarto, S.H. Building, Tembalang, Semarang City, on Wednesday (2/6/2021).

According to Prof. Yos Johan, the professorship does not only demand scientific achievement, but also mental maturity. Professors need to have experience so that they have integrity, both as educators and humans.

“It is proper for a professor to be more mature, steady, and to cultivate a spirit of concern for mankind and the universe. Dare to say the which one is right or wrong based on honesty and integrity,” said the Rector when giving his speech.

He advised the families of the professors to always be a reminder of the titles they have achieved. Thus, they can avoid the despicable actions. He hopes that professors are careful in using social media in order to create unity in Indonesia.

“We hope that professors will continue to produce quality and renewable scientific works as well as to maintain personal integrity, both as a human being and as a teacher. May Allah give His pleasure and blessings,” said this expert on state administrative law.

At the previous inauguration event, Undip Rector also said, to become a professor is not only for academic purpose but also non-academic benefits. “If there is a moral defect, we will stop the process of professorship,” he said.

Chairman of Undip Academic Senate, Prof. Ir. Edy Rianto, M.Sc., Ph.D., IPU; said that the professorship is an acknowledgment from the state for their expertise in the field of sciences. It is also the duty and mandate of the person concerned to give knowledge to students and the wider community.

“With the inauguration of professors, it is hoped to stimulate the other lecturers of Undip to become professors as possible. This is in accordance with Undip Rector’s program in professor acceleration program,” he said.

He said the inauguration of professors cannot be separated from the role of the team consisting of study programs, departments, faculties, faculty senate, academic senate, and the board of professors who play roles in determining the achievement of professors at Undip.

Meanwhile, Chairman of UNDIP Board of Trustees (Majelis Wali Amanat), Prof. Drs. H. Mohamad Nasir, Ak., M.Sc., Ph.D congratulated the 21 professors who are inaugurated during this period. According to him, the number is quite large. Hopefully the professors will be more successful in the future and more advanced in their research and knowledge.

The research carried out will not only produce publications, so that it is hoped that the resulting research will provide innovations that are beneficial to society, to nature and to the country.

“It is the main goal of UNDIP Board of Trustees, so that these professors can continue to provide benefits through the research that has been done. Once again, I congratulate the 21 professors who have been inaugurated,” said Prof. M. Nasir. (PR team)