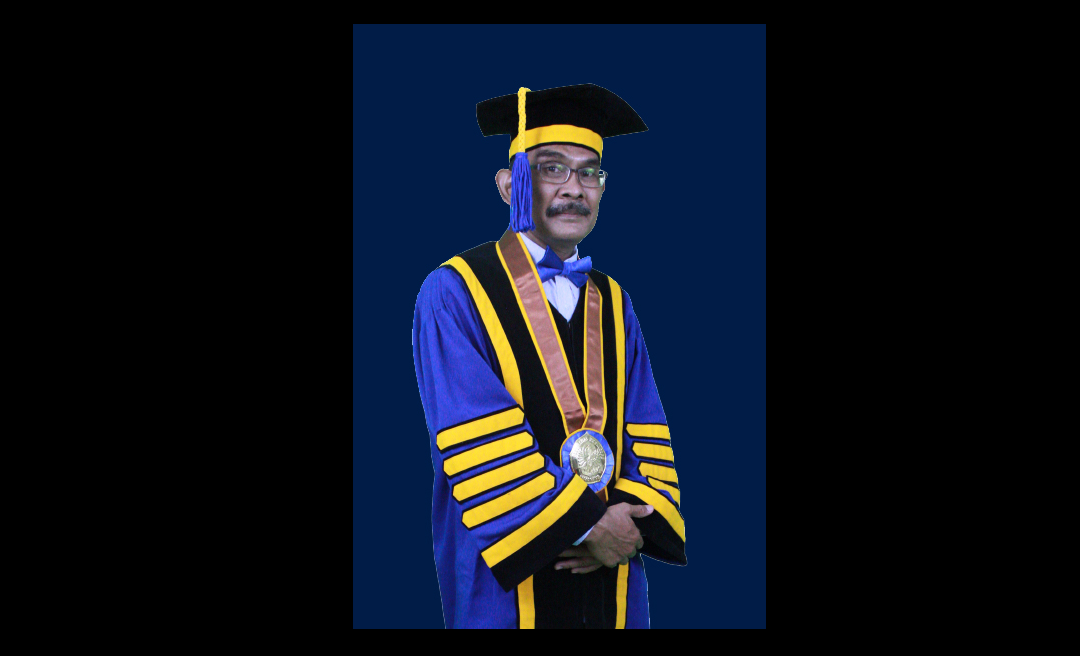 SEMARANG – The Dean of Faculty of Animal and Agricultural Sciences Diponegoro University (UNDIP), Bambang Waluyo Hadi Eko Prasetiyono, marked the achievement of the highest academic degree as a professor by delivering a scientific speech entitled “Feed Supplements to Increase Productivity of Ruminants as Meat Providers” at Open Session of Undip Academic Senate, on Monday (2/6/2021). The figure who is familiarly called Bambang WHEP explained his discovery which have been patented, even mass-produced by industry and cooperatives as the subject of discussion.

The product resulted from technological innovation in the form of feed supplement that is intended to increase the utility of protein nutrients has been certified at the Directorate General of Intellectual Property Rights of Ministry of Law and Human Rights of the Republic of Indonesia. It is released with brands Soyxyl and Koropass which are recognized as bypass protein sources; then a patent with GoPro brand as a source of Rumen Degraded Protein; Blok Mineral Plus brand as a source of macro and micro minerals; and ST-VIT brand as a source of multivitamins. “Besides the brands, I have patented a process of making bypass protein supplement flour with patent number of IDS00002960,” said the academic who earned a Bachelor Degree in Animal Sciences Undip in 1988.

According to the man who was born in Semarang on November 2nd 1963 and studied Masters in Nutrition and Animal Feed at IPB University, and Animal Physiology at University of the Ryukyus Japan, feed supplements for ruminants such as: beef cattle, dairy cattle, buffalo, goat and sheep, in Indonesia are still relatively rarely produced. Imported products which are relatively expensive still the main choice in choosing feed supplements. It is a concern since animal feed is an important component in livestock business.

Concerned about this condition, Bambang WHEP, who specializes in feed technology and serves as Feedlot (fattening) practitioner, is trying to develop a formula for animal feed supplements for ruminants so that livestock businesses in Indonesia can be more competitive. It should be noted that imported animal feed supplements are expensive, while the feed component makes up a large portion of the total livestock cultivation.

Therefore, the doctorate in nutrition and animal feed and a graduate of IPB University in 2008 is moved to make technological innovations related to feed supplements in order to improve technical and economical efficiency in the feed processing field. Several studies are also conducted to produce feed products that have high quality and economic value to increase the productivity of ruminants.

“Feed supplements are important for ruminants since it is easy to serve and its dosage is also low. Supplements are also able to increase the digestion capacity of ruminants, having high quality, and are able to overcome nutritional deficiency problems,” said the academic who owns 6 patents and has served as Dean of Faculty of Animal and Agricultural Sciences Undip since January 2019.

According to the lecturer whose full name and title is now Prof. Dr. Ir. Bambang Waluyo Hadi Eko Prasetiyono, MS, M.Agr., IPU.; feed processing needs to be managed efficiently and effectively using the right technology so that feed costs are more efficient and economical. This is because feed holds the largest component of production costs compared to other components costs. Therefore, he added, efforts in increasing the productivity of ruminants must be complemented with increasing feed cost efficiency, so that their products have competitiveness in the era of industrial revolution 4.0.

The current reality is that the demand for food sources of protein, especially beef, which cannot be met from local production needs to be resolved. The data of Statistics Indonesia for 2019 shows that national meat consumption reached 686,270 tons, while domestic production is only 404,590 tons. The main causes of low productivity and cattle population are relatively low nutritional quality of the main feed, and most ruminant farmers are smallholder farms which have limitations to provide continuous and quality feed.

The lack of fulfillment of beef from national products urges Indonesia to import, both in the form of live cattle and meat from other countries. As an illustration, the volume of beef imports to Indonesia shows an increase so that in 2018 the number reached 207 million kilograms worth of IDR 10.6 trillion.

Prof. Bambang WHEP suggested to increase the productivity of ruminants by increasing the population. The efforts are by increasing ruminants’ reproductive power and increasing production per unit of livestock. Both efforts require quality nutritional support, as well as meet sustainable and affordable nutritional needs. The problem is that ruminant feed processing is still limited in the processing of feed ingredients, so that the effectiveness and efficiency need to be improved. Feed supplements processing for ruminants to its utility of nutrients is required to support the improvement of metabolism in the body of ruminants.

From the results of the study conducted, a new technology for feed supplements is invented to increase nutrient utility, some of which have been certified at the Directorate General of Intellectual Property Rights of the Ministry of Law and Human Rights, Republic of Indonesia, namely Soyxyl and Koropass, as protein bypass sources. Then GoPro brand as a source of Rumen Degraded Protein (RDP), Blok Mineral Plus brand as a source of macro and micro minerals, and ST-VIT brand as a source of multivitamins. A patent is also obtained for a process method for manufacturing bypass protein supplement flour under patent number of IDS00002960.

When being asked about his achievement in the highest academic level, he is enthusiastically inviting other lecturers to work together to do research. “We must be more active in conducting research so that we can compete in the industrial era 4.0., as the competition is very tight,” he said. (PR team)