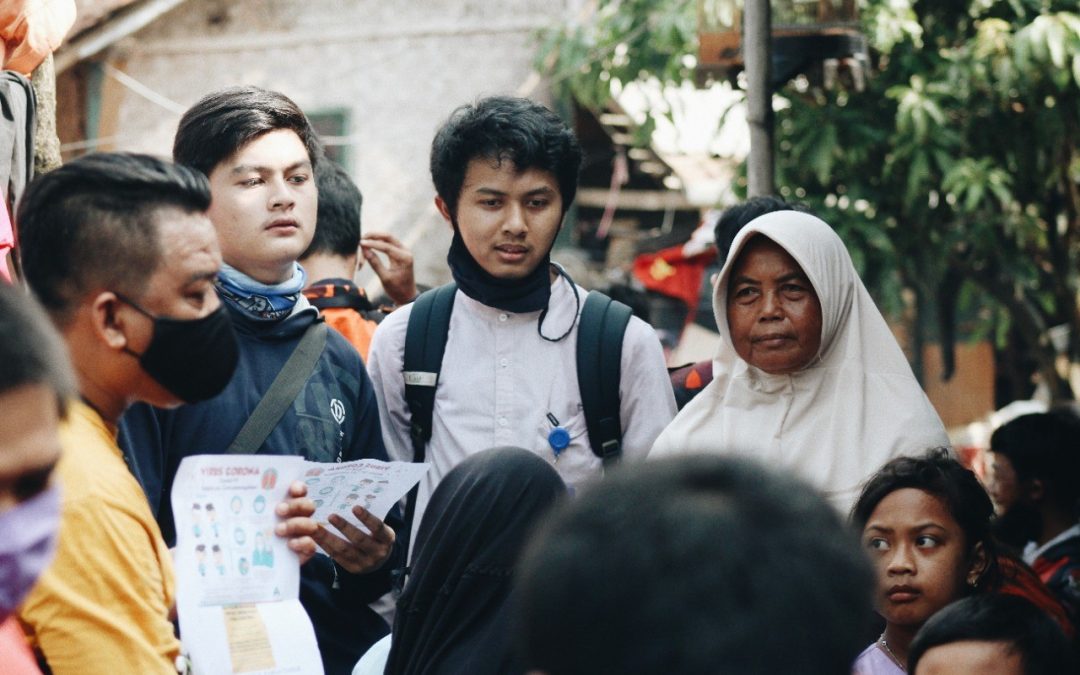 SEMARANG – At a young age, Gardian Muhammad Abdullah (21), is now the Chief Executive Officer (CEO) of Village Teaching Movement (Gerakan Mengajar Desa). Founded in September 2018 in Cianjur, West Java, the movement that is concerned with the field of education has now spread to 24 provinces in Indonesia.

Gardian’s achievements in establishing this movement cannot be separated from his education background as a student of Diponegoro University (UNDIP). This young man who was born in Cianjur, August 15th 2000, is very interested in empowering younger generation and the society through quality education.

This Information and Public Relations Vocational School Student of Undip, admits that his interest in youth empowerment and education could not be separated from his father’s role as a teacher. Since childhood, the youngest child of Hasanudin and Imas Wati is often invited by his father to participate in learning activities.

“This is the initial inspiration and background why I am very interested in the field of youth empowerment and education. I saw by myself how the problems of education, especially in the village where I lived,” said Gardian who is also General Chair of Yayasan Generasi Sahabat Pendidikan.

The student who has a hobby in the field of videography and communication, said that at the beginning of establishment of this teaching community, he was assisted by two friends, namely Rudi Reynal and Arda Novrizal. At that time the age of the three of them were still high school students.

The first day of registration at that time, was beyond expectations. The number of applicants reached to 100 people. It requires each applicant to upload a twibbon as proof of participation in the registration process. From there, to be honest, he was very happy and actually did not believe that there was so much enthusiasm from his friends in Cianjur at that time.

The next day, he got 100 new registrants. The enthusiasm of friends in Cianjur until the 7th day in total are around 700 applicants from 32 sub-districts in Cianjur.

“We are grateful that Gerakan Mengajar Desa has grown to become one of the largest educational movements in Indonesia with more than 3000 volunteers from 24 provinces throughout Indonesia,” said the student who is also often invited to be a speaker at national seminars.

The volunteers who joined are from various educational, cultural, religious backgrounds. Their only goal is to serve Indonesia.

“When we are born in Indonesia, it means that we are also obliged to serve Indonesia. As students, we have a very large contribution and special privileges so that it can be said that if we just sit and remain silent, Indonesia will also be silent. But if young people dare to take roles, steps and responsibilities, then we will achieve golden Indonesia in 2030. So, let’s move together for a better Indonesia,” said Gardian.

Gardian has been being Indonesian delegate for United Ambassadors Model United Nations (MUN) Conference at United Nations Headquarters, New York, United States. In addition, he has been being a LAPOR Ambassador for Ministry of State Apparatus Empowerment and Bureaucratic Reform of the Republic of Indonesia. LAPOR is a reporting service application for the community. He was also elected as an Adjutant to the Governor of West Java, Mr. Ridwan Kamil through the West Java Future Leaders Program. From thousands of applicants, only the 30 best youths were selected to take part in leadership training with the Governor of West Java.

During his time as an Adjutant, Gardian learned a lot about being a leader. Gardian saw how a leader makes decisions during an emergency, how to manage communication between family and community, also creating a program that can benefit many people. “This also inspired me to develop Gerakan Mengajar Desa,” said Gardian. (PR team)