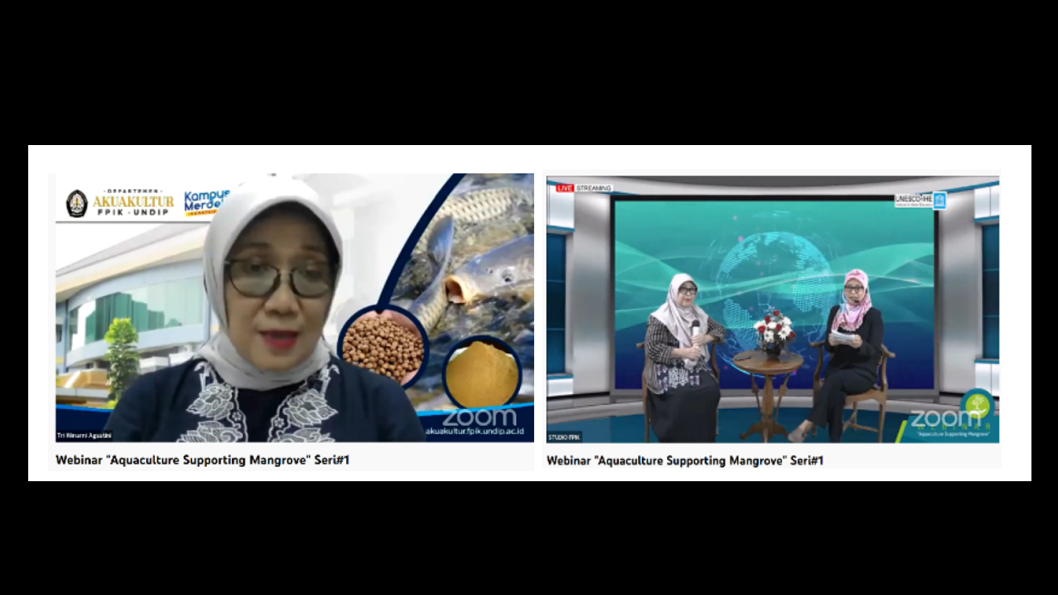 Faculty of Fisheries and Marine Sciences of Diponegoro University, especially the Department of Aquaculture, introduced new concepts in marine coastal protection, mangrove forests and the existence of ponds for farmers. This new concept is considered successful in keeping the three of them in the midst of threat of abrasion and land subsidence along the coast of Java. Professor of Department of Aquaculture, Faculty of Fisheries and Marine Sciences Undip, Prof. Dr Sri Rejeki, explained that this new concept is called Associated Mangrove Aquaculture (AMA) or a mangrove connected pond system.

The background of this AMA concept is the existence of land subsidence caused by various factors. Starting from the massive use of ground water, logging of mangrove forests which eventually caused lost of 640 hectares of ponds in Demak and another 900 hectares were affected by land subsidence and abrasion. Abrasion causes the beach morphology to change and the coastline to move. As a result, the environmental and socio-economic quality of the community has also changed. Moreover, many farmers are starting to lose their ponds and it leads to unemployment and new poverty. “The AMA concept is different from the previous one called silvofishery, where mangroves are not planted in embankments or in ponds,” said Sri Rejeki in “Aquaculture Supporting Mangrove” Webinar Series #1, which was held some time ago.

Prof. Sri Rejeki said that generally ponds on the banks of rivers or the sea have dikes with a narrow width or are directly connected to water bodies without any protection. This situation is prone to rob or sea waves. The concept of silvofishery that grows mangroves in ponds or bunds, in reality the results are less than optimal for cultivation and coastal protection. It is less optimal due to the decline in water quality and the mangroves are too dense without treatment. The AMA system, in principle, is to widen embankments bordering rivers or the sea.

“This system is growing mangroves for green belts. For example, a pond with a width of less than 30 meters from the edge of a river or sea stream, it is recommended that the entire pond as a green belt. If it is above 30 meters, then build a 10 meter greenbelt. The trick is to reverse the embankment of the pond by gradually making new embankments. In this way, mangroves will usually grow along with the formation of sediments. Then the next new embankment will be built. The AMA principle states that mangroves are not located or planted in embankments or in pond yards. With the old concept of sylvofishery, beach and pond embankments are not protected,” he said.

Project Manager and Researcher at The Chair Group Aquaculture and Fisheries (AFI) 2001-2019, Dr. Roel H Bosma explained that many countries ignore this mangrove forest. Along the coast of Java, the destruction of mangrove forests has caused the loss of settlements, infrastructure and hundreds of hectares of ponds. For this reason, it is necessary to protect the remaining mangrove forests. “Reduce the use of ground water, increase community human resources through training, and replace ponds with mangroves,” he said.

In her remarks, Dean of Faculty of Fisheries and Marine Sciences Undip, Prof. Dr. Tri Winarni Agustini said the webinar will be divided into three series. Two follow-up webinars will be held over the next two weeks. “This is a good moment to examine the role of aquaculture in contributing to the restoration of the mangrove ecosystem,” said Tri Winarni.

Head of Department of Aquaculture, Faculty of Fisheries and Marine Sciences Undip, Dr. Sarjito MAppSc really appreciates this webinar. This webinar is an international collaboration with stakeholders in the field of aquaculture in particular. The researchers of this department will continue to update the concept, mindset and technology to support environmentally friendly cultivation and in improving the coastal economy.

At the end of the session, Lestari Widowati, MSi as the master of ceremonies as well as moderator, guided the discussion of several questions from the participants through the Zoom meeting and Youtube channel. The issue of land ownership, tidal flooding, and increasing shrimp production in the AMA system attracted the enthusiasm of the webinar participants and became an interesting topic of discussion. Riri conveyed her gratitude to the donors from Ecoshape foundation in the Building with Nature Indonesia project to end this first session of the webinar.