Dimas Aldi Wicaksono (1st Winner of Male Pop Song Cover Contest in DAC 2021): Music is My Language, An Energy That Enters the Soul 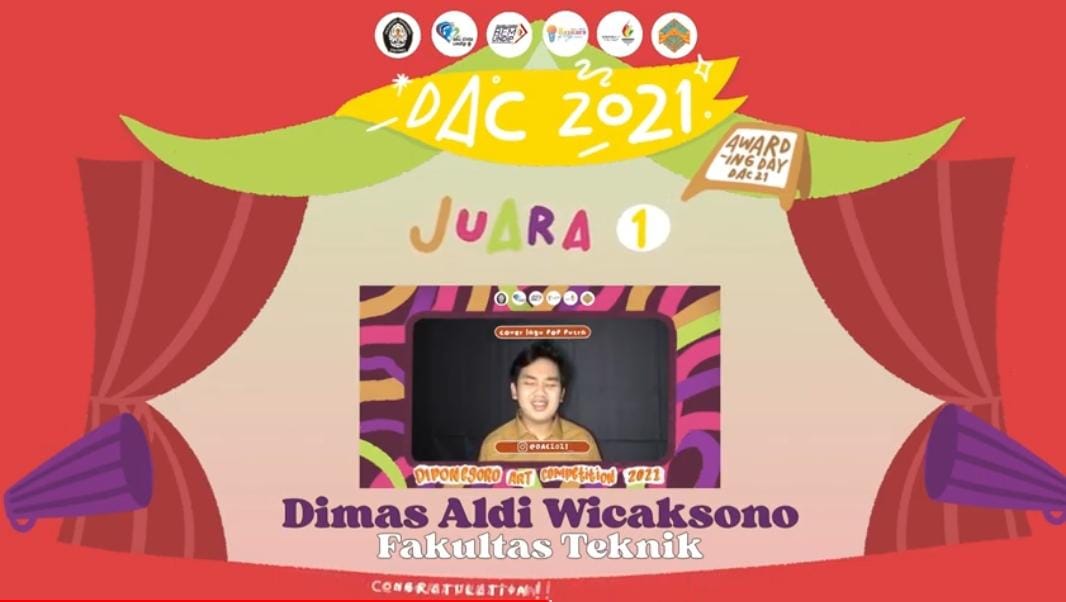 “I have been introduced to singing from a very young age, to be precise in kindergarten. At that time there was a farewell party and I sang in front of a crowd for the first time. Since then, I often sing and practice with all my heart. After that, I started participating in a singing competition for the first time in 2nd grade. Since I was in school, I participated in several competitions such as National Student Art Competition Festival and Ecclesiastical Choir Party. However, while studying at Diponegoro University, I participated in singing contest just in this year’s DAC. Meanwhile, on another occasion I took part in the QUARTS 2.0 competition held by Malaysian University of Technology participated by Indonesian-Malaysian students. Praise God, I won 2nd place for the solo singing competition,” he said.

“So before this DAC was held, there was a selection in each faculty. Each faculty sends 3 representatives for one branch of art. My own faculty, Faculty of Engineering, announced that I had passed to the next stage in early June 2021. The time allotted by the committee to practice until the D-day of the competition was about two to three weeks. In the 2021 Diponegoro Art Competition, there are five choices of songs and I performed a song called ‘Kau Seputih Melati’ which was popularized by Sammy Simorangkir. I chose the song because it was familiar and the song was quite challenging so I put in a lot of improvisation,” he explained.

Dimas said that “Music is my language”. He feels that music is like “other” energy that enters the soul, happy or sad, music is a place to express emotions in him. “I was given this singing talent by God and I hope my voice can entertain many people,” he said.

“I would like to thank DAC for providing this award and this extraordinary experience. Let’s do everything with all our heart and don’t forget to always rely on God. In addition, there is no need to be afraid to try, keep practicing, accept suggestions and input, and don’t forget the people around us who have been supportive from the start,” he concluded. (Linda – Public Relations)