Ledya Margaretha Sihotang (First Winner of Female Pop Song Cover Contest in DAC 2021): The Way to Realize Our Talents is to Develop Them 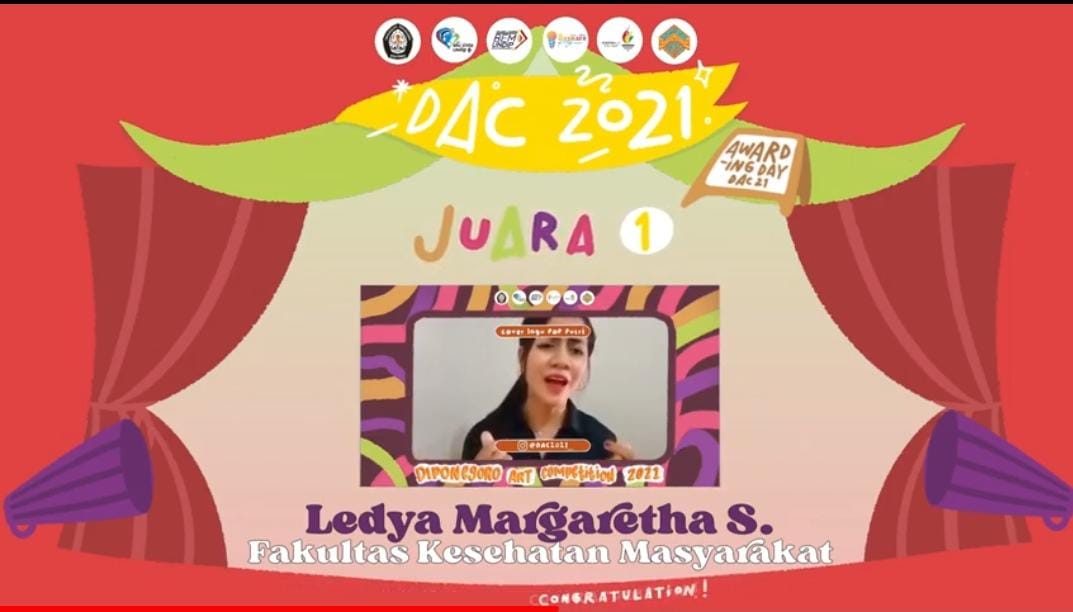 “Music is very valuable in my life, because through music I can develop my talents and show my identity. I can also get fortune through music. Besides that, music is a place to channel my feelings, because I like to compose songs even though I have never published them. The point is that music always entertains and calms my mind. At Faculty of Public Health, I attended Studio 8 Student Activity Unit, in the band division as one of the vocalists,” said Ledya Margaretha Sitohang, a student of Faculty of Public Health Diponegoro University who won the first place of Female Pop Song Cover Contest in Diponegoro Art Competition (DAC) 2021.

“In this DAC competition, I sang Maudy Ayunda’s song, entitled ‘Kamu dan Kenangan’. I think that song has the deepest meaning and I can live it, besides that my vocal range is very suitable for the song. I practiced for three days before making the video, from matching the notes to deciding on improvisation,” she said.

Since elementary school, Ledya has liked to sing but it is just a hobby. When she entered junior high school, she began to be brave to appear in public but had never participated in a competition. When she was in high school, she just ventured into the school choir and was once recommended to take part in a female solo vocal competition at the city level, and for the first time she won 2nd place in singing. Finally Ledya further developed herself to take part in several solo vocal competitions and won the championship. In college, she had the experience of participating in a female solo vocal competition at Mechanical Project event, although she was not lucky enough to become the winner.

“Everyone is given their own talent by God and we have to realize that. We can realize these talents by developing the things we like to do. For example, an individual who likes to write, can develop the hobby by participating in essay writing competitions or short story writing competitions. Winning and losing in a competition is normal. At first, I was also pessimistic about participating in this DAC competition because I saw a cover video from other participants which I thought were better. I also always convince myself and do my best without copying other people’s work. So, don’t be pessimistic, but be confident and develop your hobby so that people know who you are,” she said. (Linda – Public Relations)