Mentari Continues Working while Studying Masters at The University of The Ryukyus Once Graduated from Japanese Language and Culture, Faculty of Humanities UNDIP 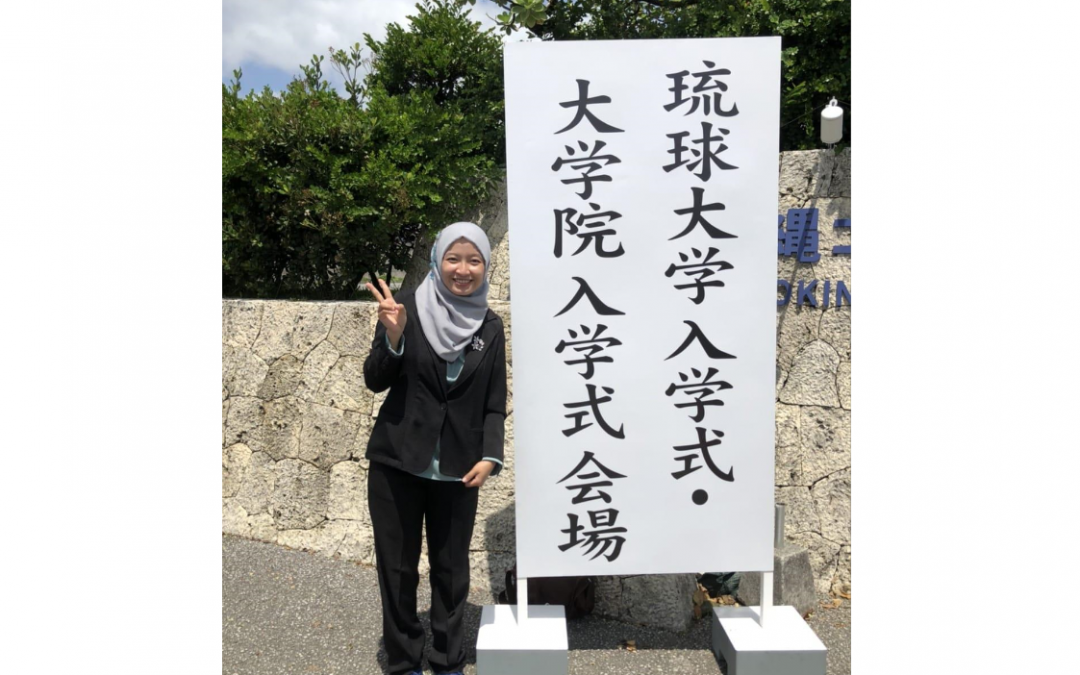 Now, she is living in Japan by working and studying Master program at the University of the Ryukyus, Okinawa, Japan. Mentari, who entered Undip in 2012 and graduated in 2018, is currently studying at the Faculty of Humanities and Social Sciences, and lives her daily life as a part time worker at Mirai Nakagusuku Afterschool Daycare, a school for children with special needs.

Mentari’s choice to continue her master degree to the Land of the Rising Sun, because of her interest in researching one of the languages in Japan that is almost extinct, namely Uchinaguchi, the local language of the Shuri/Naha area in Okinawa. “I am interested in continuing my undergraduate research on languages that are threatened with extinction in Japan, and comparing them with the situation in Indonesian society,” said Mentari Diufuk Timur.

According to her, the step that should be taken is by increasing awareness of the resilience of the language itself. She said that she first heard about the endangered language when she joined a student exchange program. Since then she was determined to continue her education to a higher level. “I also believe that preserving language should start from the smallest domain, namely family and children, so I took a job related to child care,” she explained.

As for her current job, she is a supervisor for children, a kind of caregiver, and by working she also gets to know Japanese people better. “I have to accompany them to study and play, to solve the problem and to support them in daily life because the children in my daycare are children with special needs,” explained Mentari, who takes the master program at her own expense.

Mentari said the major she takes is not far from linguistics. “Since I used to specialize in linguistics, now I also take linguistics, specifically socio-linguistics,” explained Mentari, whose husband also works in Japan.

Regarding the learning process she went through while studying at Undip, especially in Japanese Language and Culture Undergraduate Study Program, Faculty of Humanities Undip, it was also her own choice based on long-established interests. “Since I was a child, I have enjoyed learning languages, so I am very happy to have the opportunity to study at Undip Japanese Language and Culture Undergraduate Study Program. I studied Arabic and English during middle and high school, so Japanese was a new language for me. I also had the opportunity to take part in a student exchange program to Japan because I had studied Japanese before.”

Mentari is a figure who is already proficient in Japanese, English and Arabic. Her ability to speak Japanese has even been recognized with the acquisition of the Japanese Level Proficiency Test (JLPT) – a kind of TOEFL for English, from the Nihongo Nouryoku Shaken level N2. She is determined to reach Level N1.

Regarding all that she has now, Mentari is grateful for the student exchange opportunities she got while studying at Undip. This opportunity gave Mentari the chance to get to know many lecturers at the University of the Ryukyus (Ryukyu Daigaku), including meeting her postgraduate supervisor, Prof. Masahide Ishihara.

Currently she said to have received job offers from a number of parties in Japan, but in the future, after completing her master degree, she is not sure which field she will continue her career in. However most likely she will have a career in Japan first. “My husband works in Japan, so I probably won’t be able to go to Indonesia in the near future. I used to work at Cahaya Mandiri Job Training Institute in Indonesia. I am used to be a translator, so I am interested in becoming a Japanese translator. Incidentally, there are several places that offer employment in this field, but I haven’t decided yet because I’m still focusing on my research first,” said the woman who was born in Balikpapan, August 28th 1994, and has lived in Solo for a long time because she has been staying there since junior high school.

For the record, during her studies Mentari also made several achievements such as being an exchange student in 2016/2017 at the University of the Ryukyus, Okinawa, Japan; became a participant in the Student Counterpart 1st Summer Course Program Center of Asian Studies Diponegoro University and Faculty of Education Nagoya University (2017); and became a companion and translator for Japanese students. Previously she was also an Internship Student at the University of the Ryukyus Summer Japanese Business Internship program (2018) for internships at several Japanese companies in Okinawa. (PR team)