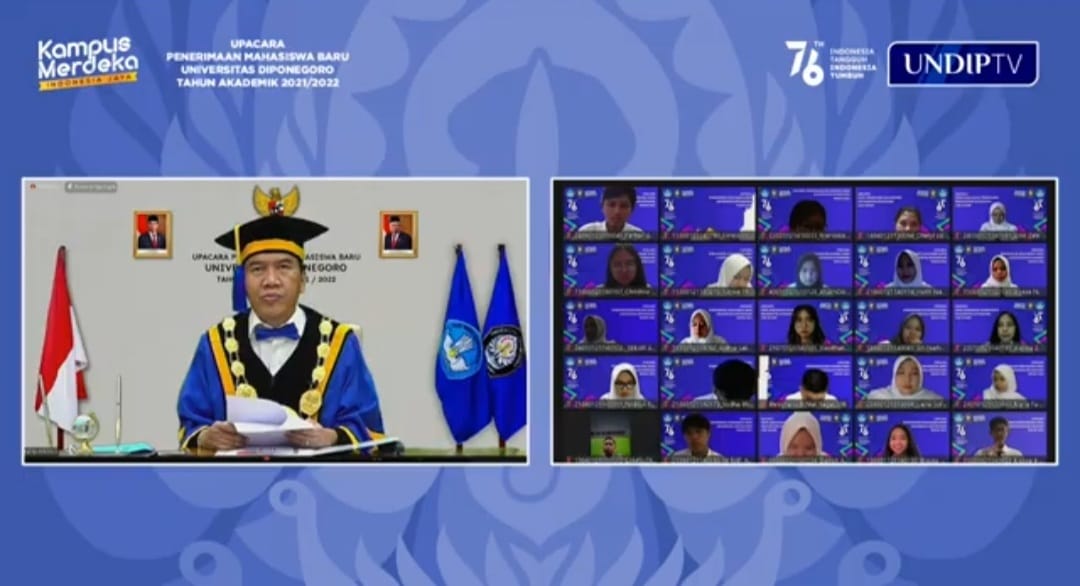 The Rector said that new students should be grateful for having been chosen by God from thousands of applicants for prospective Diponegoro University students and finally being able to study at Diponegoro University. Given the very tight selection, even for selection through National Entrance Selection for State Universities (Seleksi Nasional Masuk Perguruan Tinggi Negeri / SNMPTN), Undip is the 2nd university which has highest participants in Indonesia in 2020 and in rank of the top 6 in 2021. The accepted students must be proud to be a student of Diponegoro University, because Diponegoro University is one of the best universities in Indonesia that has a reputation both nationally and internationally. Undip has many achievements of lecturers and students at the national and international scales. Its alumni also hold various highest positions in their fields, from ministers, attorney generals, ambassadors who develop great research products and are trusted as independent organizers in the field of research in accordance with our vision of Diponegoro University as an excellent research university.

Furthermore, the Rector said that Undip is a campus for people and filled with compassion, because Undip does not only serve students who are economically capable, but Undip also provides guarantees and serves students who cannot afford the tuition fee at least 20% of the existing admission quota. In fact, Undip has provided access for more than 30% of underprivileged students either through the KIP-K Scholarship Program or Single Tuition Fee of group 1, 2 and 3. In this year there are more than 1000 students accepted through KIP-K Scholarship Program. Undip is also a unifying campus as the students come from various ethnic groups in Indonesia, from Sabang to Merauke, and they are united at Diponegoro University into one.

In addition, Undip students are educated so that after graduation they can spread the value of compassion and the good value in rahmatan lil alamin. Undip Rector strictly forbids all forms of bullying which can be included in violations of human rights and criminal acts. If this happens, immediately report it to the Rector, Vice Rector or to the Dean. The Rector will not hesitate to drop out the perpetrators and give harsh disciplinary punishment to teach the person who bully others since Undip will never tolerate rude behavior.

“Education at Diponegoro University is not only designed to produce diploma, bachelor, master, professional and doctoral graduates who have superior quality in field of sciences, but also educates people who are obedient to God Almighty. If being a scientist makes people not obedient to God Almighty, it means that Undip is not a religious campus,” he said.

At the end of speech, Prof. Yos conveyed the message that new students of Class of 2021 are not only required to learn knowledge according to their fields, but student activities are required to add soft skills which will be one of the advantages.

“Diponegoro University is a leading university that always tries to practice the value of Pancasila and defends the Republic of Indonesia based on the 1945 Constitution and Pancasila as the nation’s ideology. Congratulations to new students, remember that all students at Undip are subsidized by the Indonesian people through state money, so don’t betray their trust, study hard and gain good experience as much as possible. May Allah SWT bless your efforts, and later succeed in graduating with great achievements and becoming nice people,” he concluded. (Linda – PR)