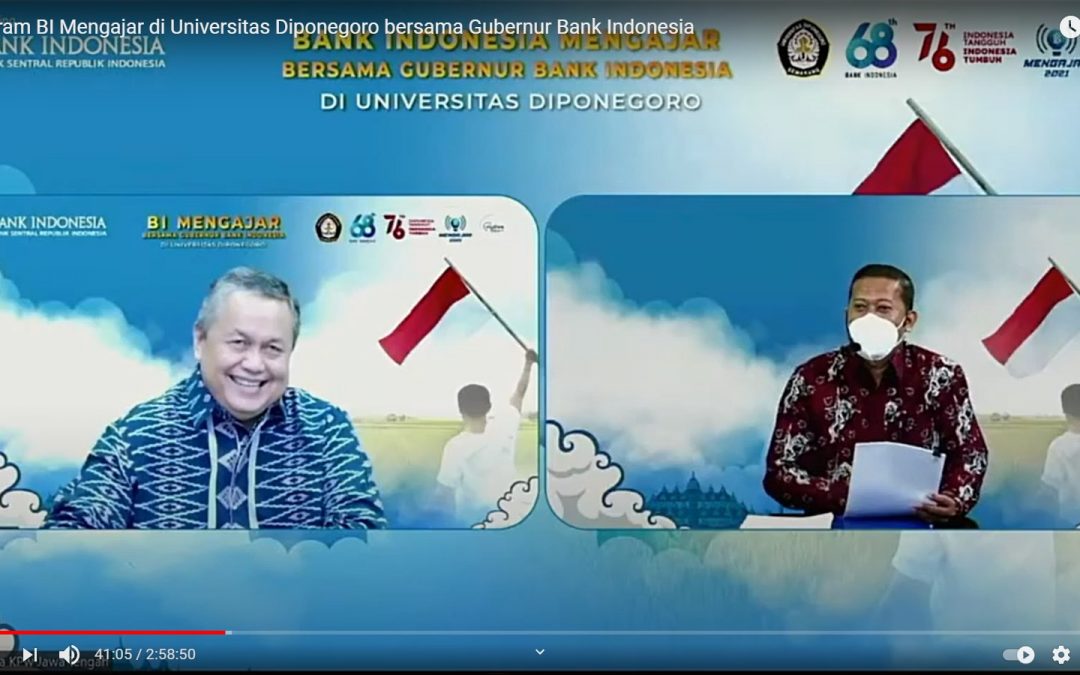 SEMARANG – Governor of Bank Indonesia (BI), Perry Warjiyo, Ph.D, revealed the plan of central bank to make digital currency as a means of financial transactions in the future. The plan to issue a digital currency or Central Bank Digital Currency (CBDC) called Digital Rupiah was disclosed by Perry Warjiyo at the BI Teaching Event held by Diponegoro University (UNDIP), on Friday (13/8/2021).

In the session moderated by Dean of Faculty of Economics and Business Undip, Prof. Dr. Suharnomo, S.E., M.Si; The Governor of BI presented a material entitled “Strengthening Synergy, Innovation, Inclusiveness, and Increasing Contribution to the National Economy”. Perry Warjiyo emphasized BI’s efforts to continue encouraging a number of sectors to implement digitization, including efforts to formulate the creation of a digital currency or Central Bank Digital Currency (CBDC), which is currently being carried out.

“We are entering a new civilization called digital civilization. With Undip Rector as a member of the Board of Trustees, we also discussed about the field of education. Digitization is important because we need to innovate. Therefore, BI continues to encourage the digitization of our financial system,” said Perry Warjiyo.

In the 2025 Digital Economy and Finance Ecosystem scheme, BI targets to bring 91.3 million unbanked peopleand 62.9 million MSMEs into the formal economy and formal finance in a sustainable manner through the use of digitization. Some of the things that have been done are electronic payments such as at toll roads, in supermarkets, providing social assistance, receiving and paying systems in local governments, and in the education system. All payments have been non-cash (cashless), including in some tourism places that also use electronic money.

In the future, Digital Rupiah will become a representation of digital money issued by the central bank and become part of monetary obligations. This CBDC is in the form of digital money that will be issued and controlled by the central bank. “We are designing the digital rupiah, including the technologies. Second, we are preparing the infrastructure in the market, all of which will be interconnected. We still in the phase of choosing the best technology to be applied,” he explained.

On this occasion, the BI Governor, who is also a member of Undip Board of Trustees, reminded us to keep our spirit in facing the Covid-19 pandemic. He gave tips on how to be a successful person in conditions like now. ‘”There are three tips for all of you to be successful and happy. Success and happiness are important, because many people are successful but not happy. The first is knowledge, the second is hard work, and the third is getting closer to Allah SWT.”

Previously, Undip Rector, Prof. Dr. Yos Johan Utama, S.H., M.Hum. hoped that BI Teaching Program could provide enlightenment for students. The Rector was also very grateful for these teaching activities. ”The knowledge taught to others is a charity, where the knowledge is useful and the reward will continue to flow,” said Prof. Yos Johan.

According to him, with this activity BI helps the continuity of teaching and learning in Undip. “With the knowledge and assistance provided by BI, it is hoped that the decreasing economy will revive and benefit mankind, the key is to help and synergize each other,” he said.

Meanwhile, the Head of BI Representative for Central Java and Yogyakarta Provinces, Pribadi Santoso, said that Diponegoro University is BI’s strategic partner in carrying out the task. In the context of economic and monetary tasks, Undip is a partner in organizing monthly consumer surveys, as well as Bank Indonesia’s quarterly macroeconomic indicator survey which result is important component in the national economic analysis and tracking system.

Pribadi Santoso stated that Undip is also the implementing partner of Bank Indonesia Scholarship where since 2017 there have been 450 Undip students who have received BI Scholarships. BI scholarship recipients, apart from receiving financial assistance, also received training in various relevant matters. (PR team)