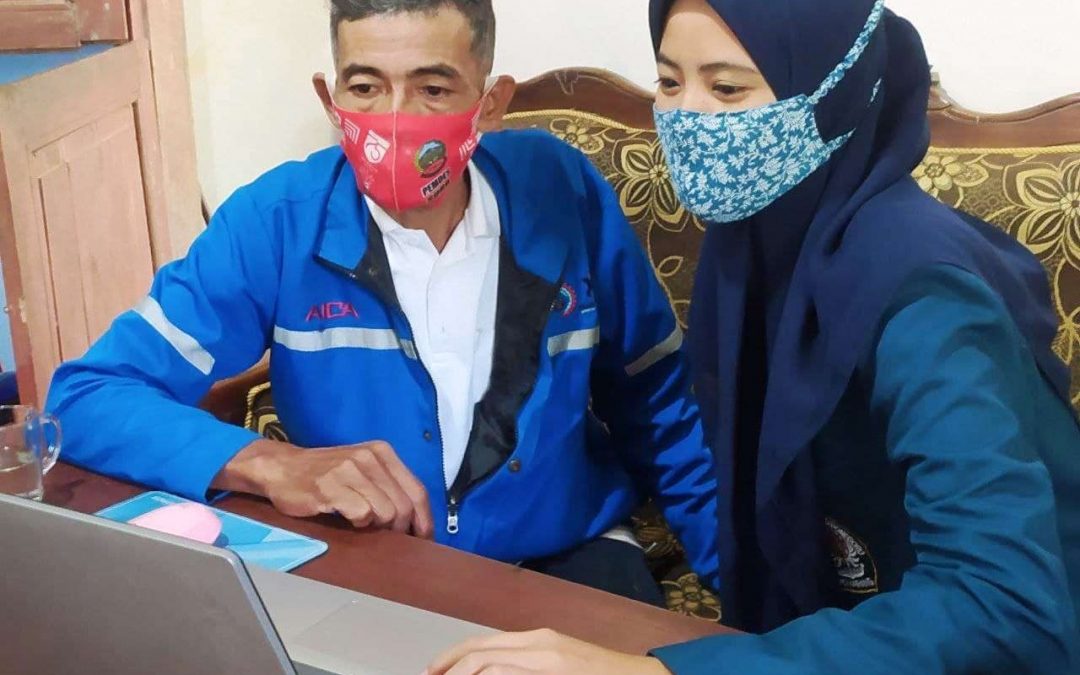 SEMARANG- Students of Student Community Service Team II of Diponegoro University helped the community to make modules and provided training on the use of websites for the development of online population administration services in Suro Village, Kalibagor District, Banyumas Regency, Central Java.

From the data collected by students of Student Community Service Team II of Diponegoro University, many residents have difficulty using online service websites because of technological stuttering. Fundamental technical issues in online services such as not having an email, not being able to login to the website and technical problems regarding passwords are problems that hinder online services in Suro Village.

The uneven ownership of WhatsApp accounts among residents also makes backing up communication not easy to do. On the other hand, the Covid-19 pandemic conditions forced online services to be carried out, while the transition from manual to online services carried out by village officials had not been completed.

Responding to this problem, Safitri Dwi Rahayu, a student of Student Community Service Team II UNDIP from the Oceanography Study Program, Faculty of Fisheries and Marine Sciences accompanied by Advisory Lecturer, Dr. Rer. Nat. Thomas Triadi Putranto, ST, M. Eng, developed a program and training with theme of “Module for Using Online Services for Population Administration (Gratis Kabeh)”. Then training was carried out to the village officials and to local residents.

Safitri said, the modules are arranged step by step. She admitted that she was assisted by village officials who work online whose responsibility to guide the community to access online services. The Head of Suro Village, Geris, is known to have helped many residents who have difficulty using the free online service website “Gratis Kabeh” owned by Suro Village.

“Initially the training will be carried out offline by complying with health protocols so we could prevent the spread of Covid-19 virus. However, during its implementation there was Community Activities Restrictions Enforcement Policy and the campus issued a circular letter to urge the students to carry out Student Community Service in full online,” said Safitri to the PR team, on Thursday (12/8/2021).

Therefore, to comply with this policy, students coordinated with the local Village Secretary and decided to carry out training through Whatsapp Group media followed by 6 village officials whose duty was to assist population administration and training services.

“The training participants were very enthusiastic and actively asked questions during the training. Even after the training, discussions are still carried out through the Whatsapp Group,” said Safitri. She also continued training for residents which she also did through the WA Group.

The Head of Suro Village, Geris, said that with the training from Undip students, there were many positive responses, one of which was from the Kalibagor District, Banyumas Regency. “Yesterday I showed the training Whatsapp group from Ms. Safitri to the sub-district officer who visited Suro Village and the officer said that this program was good. The sub-district will also hold offline training that can be participated by village officials in the near future,” said Geris.

The modules made by students of Student Community Service Team II Undip can be used by village officials and residents from other villages in need. The module can be accessed and downloaded at the link: https://drive.google.com/file/d/1ku4ZLAGHoO73ldvWKUTz1oDD4Gd2LzUX/view?usp=sharing

“The module is open to be accessed and utilized. Indeed, there are still shortcomings, but at least it is enough to encourage online service training in villages,” said Safitri. (PR team)