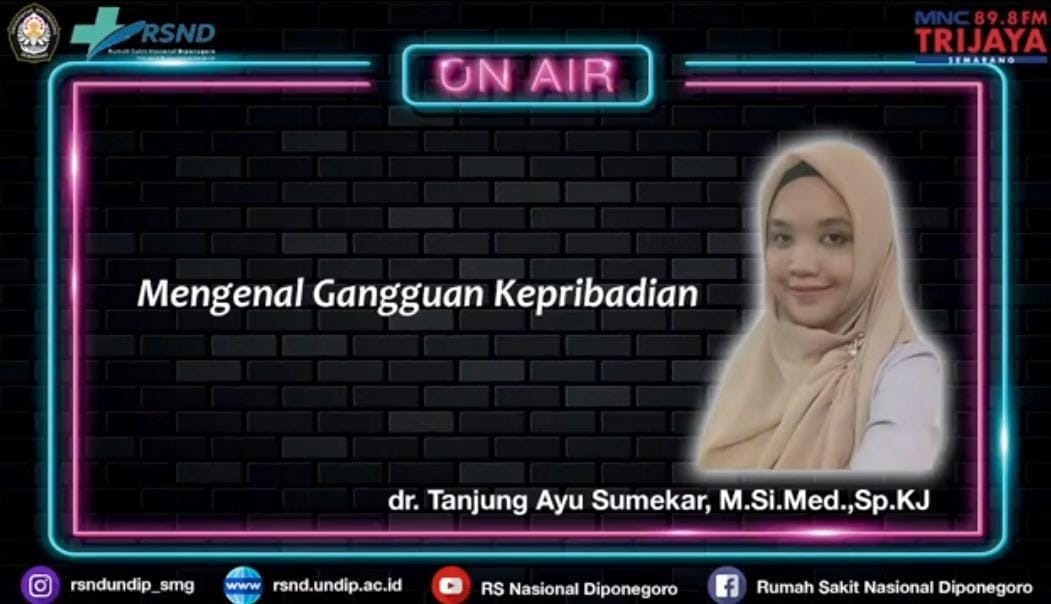 Personality disorders are a type of mental illness. This condition causes sufferers to have patterns of thought and behavior that are not normal and difficult to change. A person with a personality disorder generally has difficulty relating to other people and understanding situations. This causes problems and limitations in building relationships and carrying out daily activities, such as work, school, and social activities including dealing with stress to depression. People with this disorder sometimes cannot tell which one is normal and which one is not normal. A sufferer of personality disorder thought that his/her behavior and way of thinking are natural and have no problems. In fact, that person may even blame others for the situation.

“Personality is a way of thinking, feeling, and behaving that is unique to each person. It distinguishes one person from another, so there is no similar personality even though they are twins. These characteristics usually persist over time or do not change, and are influenced by upbringing, experience, environment and characteristics inherited from parents,” said dr. Tanjung Ayu Sumekar, M.SI. Med., Sp.KJ, Psychiatrist at Diponegoro National Hospital of Diponegoro University.

According to dr. Tanjung, a person who has a personality disorder means that one’s personality is disturbed, one of the types of mental disorders where a person has a pattern of thinking, feeling and behavior that is not normal and is also difficult to change. Most often people with personality disorders find it difficult to relate to other people. The cause is not known for certain, several theories and factors mention including genetic factors, brain structure factors and chemical structures and trauma factors in childhood, such as disharmony in the family or perhaps being neglected since childhood.

“Personality disorders are divided into three types, namely personality disorders type A, type B, and type C. Type A generally has strange, eccentric, unnatural thoughts and behaviors and there is excessive suspicion, such as schizotypal, schizoid and paranoid disorders. Type B, has unstable emotional behavior, often vents emotions that are unpredictable, more emotional and dramatic. Meanwhile type C has anxious characteristics, often feels worried, afraid and excessively thinks about everything,” she explained.

“Personality disorders can be treated by using therapy and medicine. When a person comes to a psychologist or psychiatrist in a state of stress or depression, we first treat the anxiety and depression by conducting in-depth interviews about what causes stress, anxiety or depression. Then we see how life in the past, the personality of that person, and it can be done by doing certain Questionnaires. If there are other indications, for example the cause is substance or alcohol, that person can be examined in a laboratory, whether there is substance abuse or not. Furthermore, the main therapy is psychotherapy, such as cognitive behavioral therapy since theoretically a person’s behavior is based on his/her thoughts. There is also psychodynamic psychotherapy which aims to make the patient knows about what has caused him/her to behave that way. There is possibility that it is caused by past histories in childhood, so that the person is expected to adapt to current reality and be able to change the behavior into normal again. But it does take time, it can be in a week, a month or even years so it takes patience and commitment to undergo this therapy,” she continued.

“If we realize there is behavior that leads to personality disorders from ourselves, please immediately consult a health worker, either a psychologist or a psychiatrist. Especially if these symptoms have interfered with daily activities or brought complaints from colleagues around us. And if we meet people in our environment who also show symptoms of personality disorders, try to invite us to share stories about their condition. If we see signs that someone wants to hurt themselves and has the potential to hurt others or wants to commit suicide, we should accompany them and seek help immediately by coming to the hospital,” said dr. Tanjung. (Linda – Public Relations)