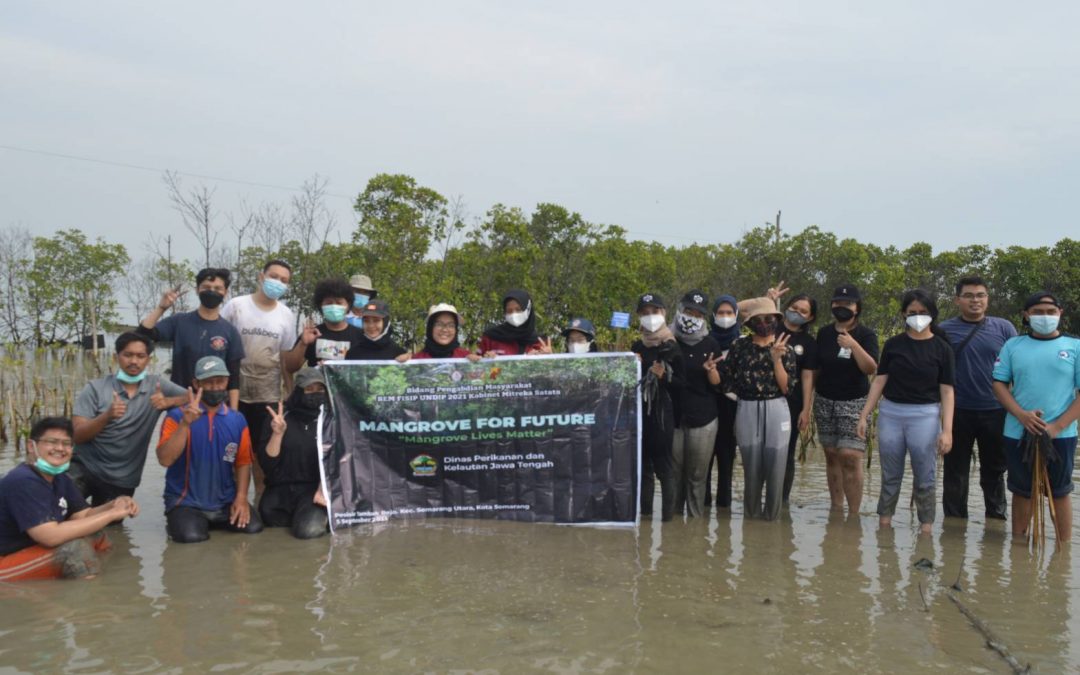 Semarang- Student Organization of Faculty of Social and Political Sciences of Diponegoro University together with Marine and Fisheries Departments of Central Java Province and PT Djarum Indonesia, carried out mangrove planting activities in “Mangrove for Future” event initiated by Student Executive Board of FISIP Undip 2021.

“Mangrove for Future” event is held on September 5th 2021 at 08.00 AM by planting 1000 mangrove seeds. The planting of 1000 mangrove seeds was carried out at Tambak Rejo area, North Semarang. This event aims to raise awareness and participation of students to contribute directly to the preservation of mangrove forest ecosystem.

“My friends and I from the Community Service Division of Student Executive Board of Faculty of Social and Political Sciences Undip really hope that through this experience, the students who attend this event will be more committed to environmental issues. It is hoped that the contribution is continually carried out, not only in this event,” said Tassa Tantiana as Chief Executive of “Mangrove for Future”.

The “Mangrove for Future” event initiated by Student Executive Board of Faculty of Social and Political Sciences Undip 2021 received positive support from Marine Department of Eastern Region and Marine and Fisheries Departments of Central Java Province. “Thank you for the mangrove planting activities organized by UNDIP students who are making action in rehabilitation of the coastal areas of Semarang City, especially at Tambakrejo Village. We hope that in the coming year there will be more UNDIP students who care about preserving the environment both on land and at sea,” said Surya as the Conservation Division Staff who was also present at “Mangrove for Future” event.

Besides Marine Department of Eastern Region and Marine and Fisheries Departments of Central Java Province, this event was also attended by representatives from PT Djarum Indonesia who also appreciated the students’ concern for the environment. “What about our earth if we don’t take care of it by ourselves,” said Mr. Supohadi as the representative of PT Djarum Indonesia.

The success of this event could not be separated from the assistance from Camar Group (love of the beautiful and lush mangroves) of Tambak Rejo, North Semarang. Yayit as the representative of the Camar Group said, “I really appreciate the students from Faculty of Social and Political Sciences Undip who have helped in this mangrove planting program. I hope that in the future the wider community can also participate in maintaining this natural stability, especially protecting coastal areas from abrasion by increasing number of mangrove trees in coastal areas.” (M Zainal/ Feyza Syifa)