dr. Arinta Puspita Wati, Sp.S. (Neurologist at Diponegoro National Hospital of UNDIP): Every 3 Seconds, 1 Person in the World Has Dementia, Recognize It and Beware of Dementia! 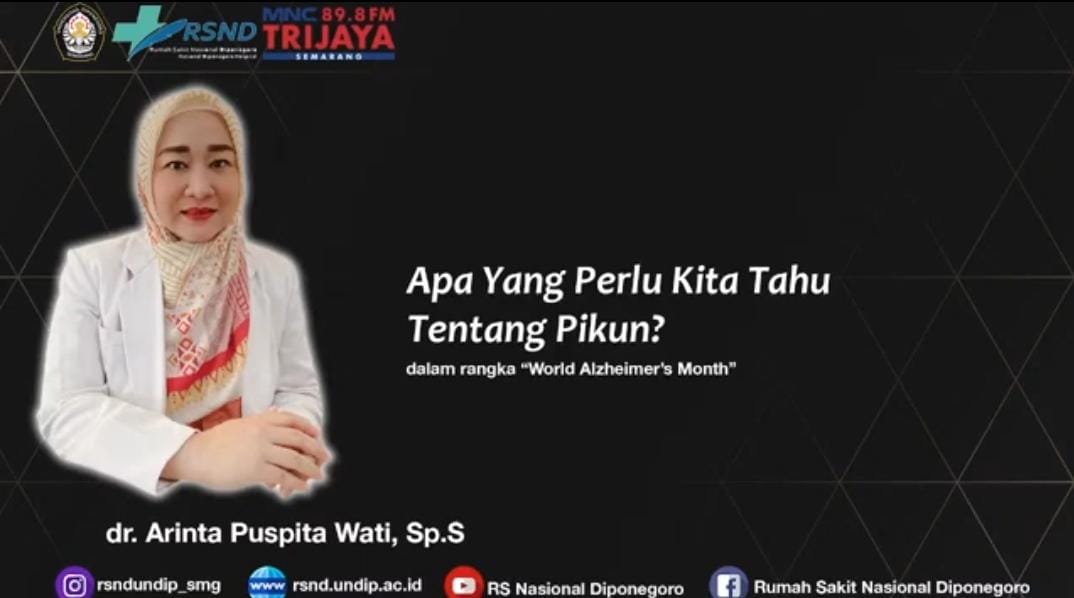 The strength of memory can be influenced by various factors, one of which is age. In aging, with the increasing age of a person, various kinds of chemical processes and reactions that occur in vital organs undergo changes, including the brain. The brain acts as the body’s control center and composes the central nervous system, including regulating cognitive function, and if this is disturbed or damaged, it can lead to dementia. Dementia is a pathological senile condition. The term senile is more commonly used in society to refer to a condition of decreased memory. Ordinary people think of senile dementia as something that is naturally experienced by the elderly due to age, and senile dementia is an unavoidable effect of aging.

“Dementia is closely related to memory decline, while dementia itself is not only due to memory disorders but there are other symptoms experienced by patients besides memory loss,” said dr. Arinta Puspita Wati, Sp.S, Neurologist at Diponegoro National Hospital of Diponegoro University.

Moreover, dr. Arinta said other symptoms experienced by Dementia patients can be in the form of changes in behavior, sleep disturbances, emotions, anger, language disorders and others. There are various types of dementia. Alzheimer’s is the most common and severe type of dementia with the most prominent symptom being memory impairment (forgetfulness). There is also Vascular Dementia, a Dementia that attacks post-stroke patients; Dementia in Parkinson’s disease, usually characterized by tremors or shaking; Frontotemporal Dementia; and Lewy body Dementia.

“Dementia is actually a term we often hear, but senile dementia should be further examined whether this is dementia or not. The characteristics of senile dementia are progressive memory disorders (for example, often forgetting to put things away, often forgetting appointments), wandering or going somewhere without a clear purpose, changes in behavior (temperament or tends to withdraw themselves from the society), and disturbances in daily activities,” she said.

“Prevention measures from this disease include a good lifestyle, not smoking, consuming healthy food such as lots of vegetables and fruit, exercising regularly. Don’t forget to use our brains to think or don’t be lazy to think so that we avoid senile dementia,” continued dr. Arinta.

According to her, in the pandemic era, telemedicine can help to make it easier for patients and their families to consult. For patients with dementia, continuous treatment can slow the disease process, reduce symptoms, improve the quality of life. Patients need to do activities that are useful to stimulate and train their brains. Extraordinary assistance is needed for dementia patients, especially when they are at an advanced stage, care givers (someone/family who care for patients) also need support and good information in assisting patients.

“We all need to know and be aware of this dementia disease, because currently the world’s data shows that every three seconds there is one new patient with dementia. Moreover, Dementia disease has a very big impact in various aspects so we need to provide good management. Don’t normalize the symptoms of senile dementia,” she stated. (Linda – Public Relations)