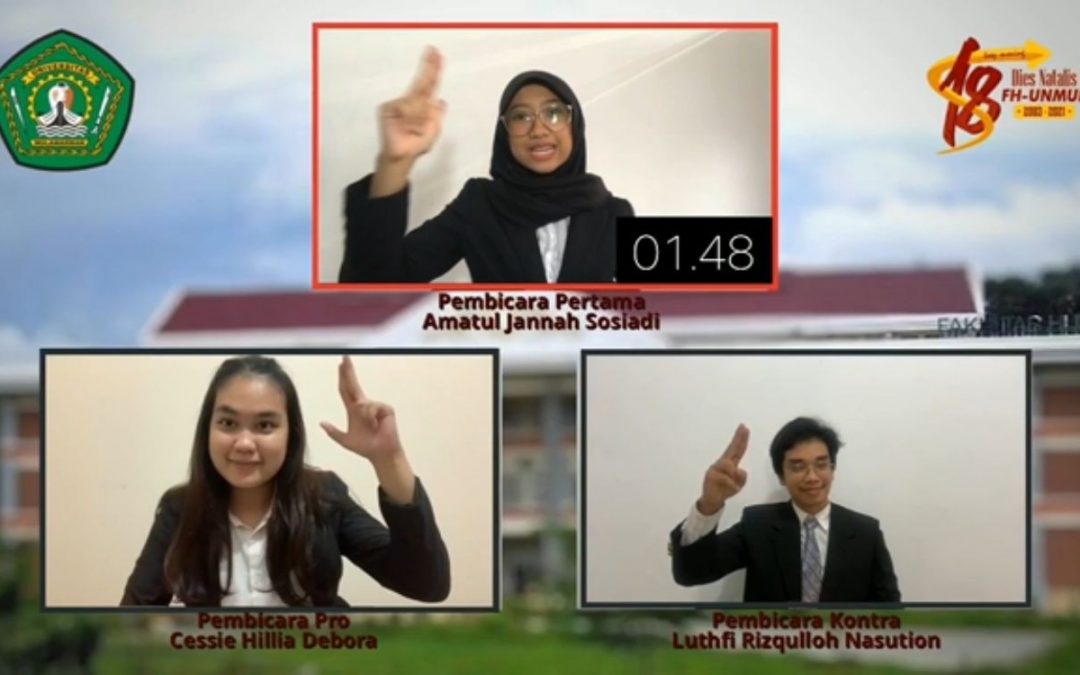 SEMARANG – Debate Team of Faculty of Law Diponegoro University (UNDIP) won 1st Place in National University Debate Championship (NUDC) 2021. Three personnel from Faculty of Law Undip demonstrated their superiority in the competition with the theme “Enforcement of the Supremacy of Law in the Era of Modernization” which was held online in the framework of the Anniversary of Faculty of Law, Mulawarman University, East Kalimantan.

Represented by Amatul Jannah Sosiadi, Cessie Hillia Debora, and Lutfi Rizqullah Nasution, Undip managed to become the winner by eliminating approximately 15 competing teams from various State Universities and Private Universities throughout Indonesia. “Of course, I am very happy to be able to compete and get 1st place with friends from Undip and outperform other competition participants from various universities in Indonesia who are also showing great performance. The difference in domicile of Undip Team which is far apart from the host university is not a barrier to get a great results. This is also a matter of pride for us,” said Amatul Jannah on behalf of her friends when interviewed by the PR team, on Friday (20/8/2021).

This 3rd semester student said that the competition was carried out by collecting videos from each participating team. “As far as I know there are about 15 participants who took part in this competition based on the number of participant representatives from the team in the Whatsapp group. The collection of debate arguments is in the form of a video submitted on August 1st 2021,” she explained.

The contents of the material presented by the team in this competition related to the enforcement of the rule of law in the modernization era. It is specifically related to the current situation, namely the implementation of Community Activities Restrictions Enforcement as a solution to cure the pandemic in Indonesia. “In this competition, we act as both parties, both pro and con. So in one team there are three speakers, namely speaker 1 as the opening and closing, speaker 2 as the pro, and speaker 3 as the contra,” Amatul added.

Being asked about the preparation for this competition, Cessie Hillia, said that the preparation itself was done quite well because every day the team is effectively building arguments by referring to various literatures such as books, journals, articles, and other literature. “Every day, we often do brainstorming to unite our thoughts in building structured and logical arguments,” said Cessie, her nickname.

Of course, this achievement is presented entirely on behalf of Undip, which is the background for the unity of team to study at the campus with provided facilities provided. The team can communicate well even though they are far apart. “Not to forget the lecturers at Faculty of Law Undip who always support us in every process so that we can be the best in this championship,” she added.

As for the achievements of the debate team, apart from first place in this competition, the debate team had previously won 2nd place in the Internal Moot Court Competition for the Dean’s Cup X, Faculty of Law, Diponegoro University. Meanwhile in semester 2, the three of them again competed in Ubaya Law Fair competition.

Individually, the team member from Faculty of Law Undip has gained various achievements, such as those achieved by Cessie Hillia and Amatul Jannah Sosiadi who won 3rd place and Favorite Champion in Unissula Law Fair National Student Law Debate Competition. Meanwhile, Luthfi Nasution, also from Faculty of Law Undip, was the Finalist of Art Event Proposal Competition organized by Bali Tourism Polytechnic. Amatul Jannah was also entrusted with being Undip delegate at the Japan English Model United Nations event. Meanwhile, Cessie Hillia had the opportunity to become a recipient of Paragon scholarship 2021 from Diponegoro University and was mandated to be 1 of 10 speakers from ASEAN countries to be the human rights speaker at the SouthEast Asian Youth Festival.

“These achievements that we have achieved, both individually and in groups, continue to spur us to be the best version of ourselves so that we can make Diponegoro University proud in the future and contribute to the country of Indonesia,” Cessie emphasized.