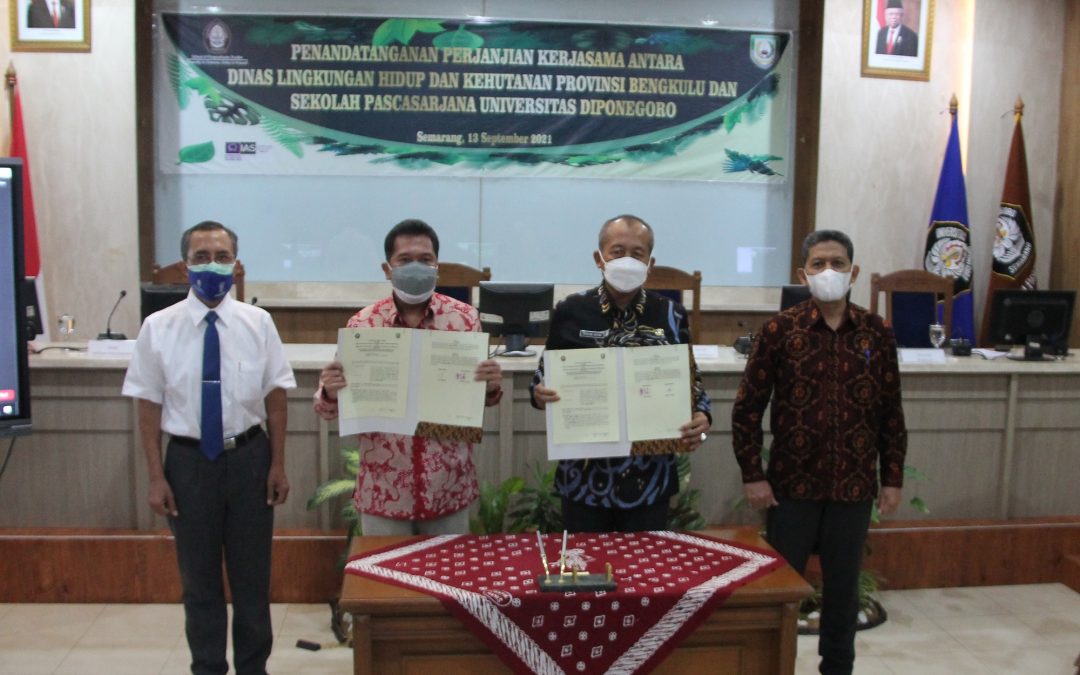 SEMARANG — Department of Environment and Forestry (Dinas Lingkungan Hidup dan Kehutanan / DLHK) of Bengkulu Province collaborated with Postgraduate School of Diponegoro University (UNDIP) as an effort to find solutions to overcome the problems of coastal area management in Bengkulu City. The joint agreement to overcome coastal problems in Bengkulu City was stated in a cooperation agreement signed in Semarang, on Monday (13/9/2021).

As is known, most of the coastal area in Indonesia experience many environmental problems, including Bengkulu City. Therefore, this cooperation is also important for other regions.

“We hope that this collaboration can give solution to Bengkulu Government related to the current problems in coastal areas. The solutions needed are solution to the threat of abrasion and strategies for managing marine planting conservation in the area,” said Prof. Ambariyanto.

Meanwhile, the Head of Department of Environment and Forestry of Bengkulu Province, Ir. Sorjum Ahyan MT, explained that the environmental conditions in the coastal area of Bengkulu City were vulnerable to the threat of very large abrasion. This condition occurred because the area is directly in the opposite of Indian Ocean. Bengkulu City also really needs to conserve mangrove habitat.

“We really hope that in these three months, in collaboration with Undip we can make the right strategy for mangrove conservation in Bengkulu City area. It is including strategies related to socio-economic problems for coastal communities where lived in area of beaches hit by abrasion,” Sorjum added.

Considering the large number of people living in forest areas, and most of them belong to not so well off community in Bengkulu Province. Therefore, measurable and concrete efforts are needed to overcome their problems. “The problems of the people living in this forest area are the priority for work programs of Bengkulu Governor at this time,” he said.

Sorjum Ahyan said, with various explanations of the existing problems, it is hoped that the collaboration between Undip and Department of Environment and Forestry of Bengkulu Province can also create a sustainable forest management strategies in order to prosper the people living in forest areas. “With the cooperation that we have carried out now, in the future we hope that other Regional Organization can also join in working together to improve community welfare. By holding a collaboration, the implementation of development in Bengkulu Province area which is the main concern can be done well.”

“In principle, we welcome this cooperation program. We also welcome the local government to send its staffs for continuing advanced studies at Undip, both at Master and Doctoral levels. We have many postgraduate study programs as well as have the autonomy to open new study programs,” he explained. (PR team)