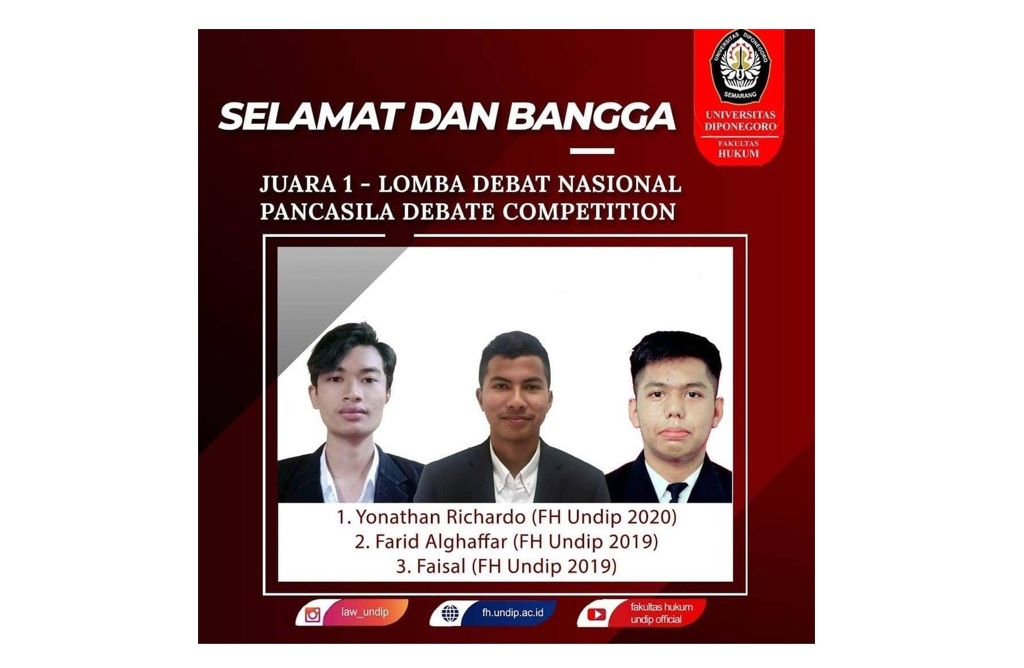 In the competition with the theme of “Development and Update of National Law during the Covid-19 Pandemic”, these three Undip Law students were the best of the 60 participants who were members of 20 teams from 18 universities in Indonesia. Pancasila Debate Competition 2021 is a national debate competition held from August 14th 2021 to September 5th 2021.

“Alhamdulillah, first of all we are grateful to be able to make Undip, our alma mater to be proud. We are very happy and hope that in the future we can bring Faculty of Law Undip to be champion again in the future events,” said Farid Alghaffar on behalf of his teammates to the PR team, on Wednesday (15/9/2021).

According to Farid, participation in the competition was prepared seriously. Many preparation were done, including by conducting exercises, discussions, and sparring related to the motion that would be debated with his other colleagues. “Then before the motion was announced, we had also practiced with the general motions that were often debated. The goal is to train logic and pronunciation,” said Farid.

Meanwhile, Farid Alghaffar himself has won the championship twice, including being the Best Speaker of the Internal Debate in Internal Law Competition Research Group and Faculty of Law Undip Debate Competition 2021. Faisal also made many achievements such as being the 3rd place in Diponegoro Law Fair Internal Debate 2019 held by Faculty of Law Undip, 2nd place in Economic Competition 2018 of Trisakti University, and 1st place of National Science Olympiad in Economics at Cirebon Regency level in 2017 and 2018.

The three students besides being grateful, also expressed their gratitude to the supervisors and assistants from Undip who had provided support. They emphasized that the achievement is inseparable from the role of many parties, including faculties and universities that have formed a good academic environment.

Farid hoped that other students of Faculty of Law Undip will dare to try getting achievements in other competitions. This effort is in order to increase desires and fulfill curiosity which can boost self-confidence. “Because when we have desire and effort to try, best results will follow.”