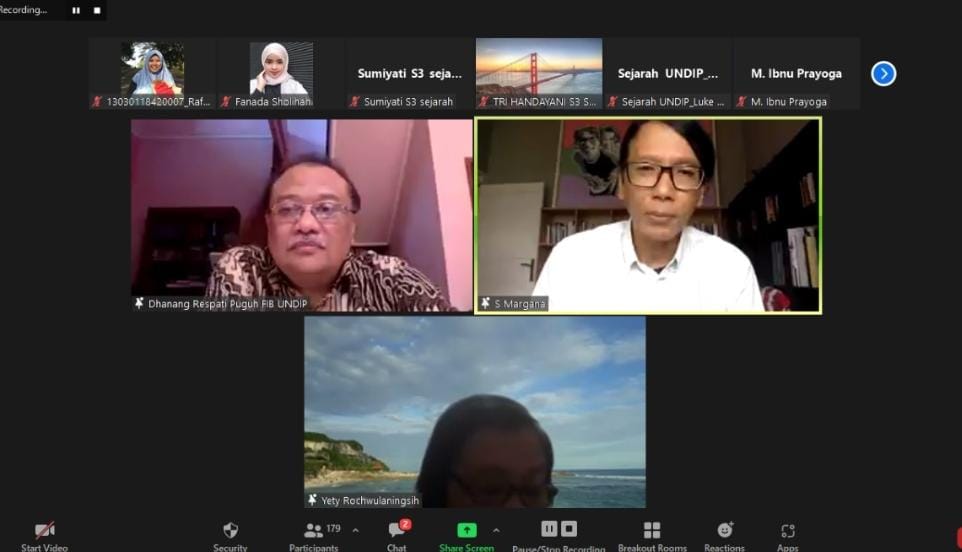 History Doctoral and Master Study Programs held a webinar with theme “Initiating New Approaches in Writing Indonesian History” (25/9) as a forum to discuss various approaches to historical writing.
The event was opened by the Head of Department of History, Dr. Dhanang Respati Puguh. He expressed his gratitude to Dr. Sri Margana, M. Hum., M. Phil. from Gadjah Mada University and Prof. Dr. Yety Rochwulaningsih, M. Si. from Diponegoro University who had been willing to share knowledge with the webinar participants.
“This webinar is a response in the midst of stagnation, which is called stagnation of perspective or perhaps stagnation of approach since Prof. Sartono initiated a multidimensional approach. It was later labeled as social science approach which continues to be a debate. Today, debates about approaches to historical writing are very rare. So that Prof. Dr. Singgih Tri Sulistiyono as Head of History Doctoral and Master Study Programs held a webinar on new approaches to historical writing,” said Dr. Dhanang.
Meanwhile, Dr. Alamsyah as the Deputy Dean for Academic and Student Affairs at Faculty of Humanities expressed his highest appreciation to the committee of Department of History, both Bachelor, Master and Doctoral Study Programs who were very productive in organizing webinars in various packages and topics to support scientific improvement. “I think this is a constructive effort outside the curriculum related to the enlightenment of historical science from various perspectives,” he said.
In the material presented by Dr. Sri Margana regarding an alternative approach in writing Indonesian history with the title “Indonesian Historiography: From Nationalism to Globalcentrism”, he said that the study and writing of Indonesian history had progressed very rapidly, especially in terms of the diversity of themes, depth of analysis, and substantive richness. These developments, according to Dr. Sri Margana was not matched with alternative historiographical ideas from the historical aspect of methodology and philosophy. This mismatched concept had actually been questioned and became the main mandate of the National History Seminar I in Yogyakarta in 1957.
“The main problem in modern Indonesian historiography today is the stagnation of centrism and perspective. The exclusivity of national history must be abandoned by emphasizing the global aspect as did by historians from Europe and America in the 1980s. The history of Indonesia must be written with a global tendency to think. Several models that can be developed include Comparative History, Transnational History, World System Theory, Post Colonial Theory, Multiple Modernity, and World History,” he explained.
Furthermore, Prof. Dr. Yety Rochwulaningsih discussed a fairly strategic issue in the field of praxis, namely the social science approach in historical research. She said that the approach used by historians was less influential. The approach being discussed is related to the instruments used to explain the problems studied. This approach will lead to novelty. In the initial stage, researchers need to establish an approach. This needs to be done because the historical data (historical sources) obtained are often incomplete. Therefore, in order for these sources to provide information, there needs to be intellectual intervention. To carry out intellectual intervention, instruments are needed in the form of concepts and theories which are implicitly a manifestation of the approach.
“This topic is presented based on concerns as people who have studied history about the current conditions of development in the field of history. Its development is objectively lagging behind as seen from the number of research and publications of historians cited, which in terms of quality and quantity still need to be improved,” said Prof. Yety.
Approaches through the use of concepts or theories can help researchers to explain thoroughly, comprehensively, and critically. Some of the approaches in historical research that are most likely to be carried out are combined with other social sciences and humanities field, such as sociology, anthropology, politics, and so on. (Rafngi – History / Linda – Public Relations)
Translated by: Titis (Public Relations)
Share this :