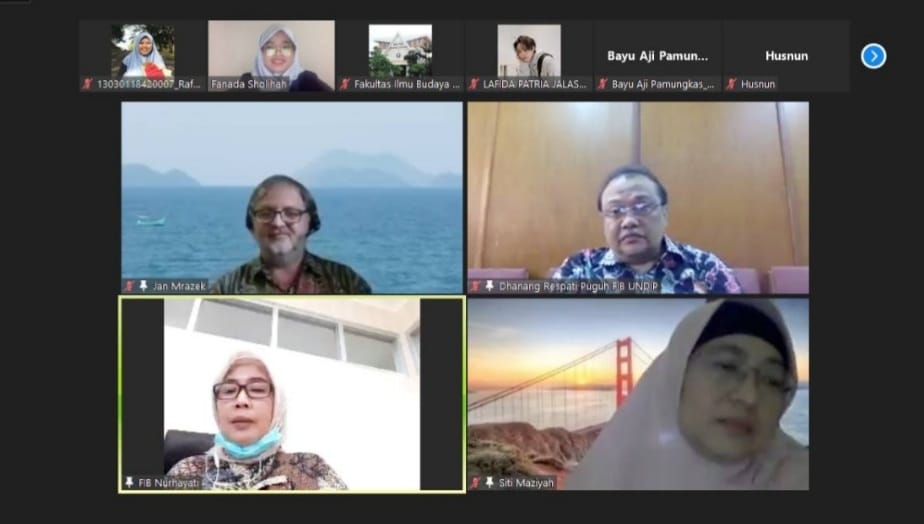 The History Undergraduate Study Program of Faculty of Humanities of Diponegoro University held a public lecture entitled “Wayang on Television and the Internet” (28/9). On this occasion, the History Undergraduate Study Program invited Dr. Jan Mrazek from the Department of Southeast Asian Studies, National University of Singapore (NUS) as resource person and Dr. Dhanang Respati Puguh as moderator.

The event was opened by the Dean of Faculty of Humanities Undip, Dr. Nurhayati, M. Hum. In her speech, she said that the topic raised in this public lecture was very interesting, because it was related to the challenges for traditional arts in the era of globalization. “Hopefully today’s event can answer various questions regarding the various struggles that occur when traditional arts or wayang (shadow puppet) which contain philosophical values are presented in the contemporary space,” said the Dean of Faculty of Humanities Undip.

In delivering his material, Dr. Jan Mrazek shared his experience when he started researching wayang. In 1992, one of the commercial television stations in Indonesia began live broadcasting all-night wayang shows twice a week.

“The meeting between wayang and the media cannot be interpreted as an ordinary performance because it contains a struggle for identity. Although the television said that they only transferred the puppets to television, since they were shown on television, the puppeteers certainly wanted to perform better. The desire to follow the tastes of the audience is often considered contrary to the standards in the art of wayang and causing debate. The packaging of wayang shows on television was also followed by the puppeteers in the village, resulting in a combination between wayang and television. Wayang on television depicted in Javanese style when appeared in commercial television stations in various regions including Yogyakarta in 2005,” he explained.

Furthermore, according to Dr. Jan Mrazek, the appearance of wayang on television has actually proven that wayang has a very open identity. Wayang is a form of culture that is influenced by India and continues to develop from time to time, so it is only natural that puppet shows appear in various packages. Before being broadcasted on television, wayang had been disseminated through cassette recordings and radio broadcasts. For the audience, wayang shows on television have both advantages and disadvantages. The drawback of wayang shows on television is the absence of interaction between the audience. The atmosphere of a show filled with spectators certainly cannot be felt when watching wayang through television. However, the audience can watch the wayang performance anywhere without feeling worry about the rain in area of performance.

In subsequent developments, internet media emerged, especially the Youtube platform which also became a medium for broadcasting wayang shows. The platform appears thousands of recordings of wayang performances in various packages. The emergence of new internet media has enabled wayang shows to be watched by audience wherever they are, including abroad. In addition, the audience can also interact and convey their impressions of wayang shows through the comments column. Various platforms on social media that contain information about wayang also make it easier for researchers to search for sources or research data. (Rafngi History/Linda Public Relations)