Coordinating Minister for Political, Legal, and Security Affairs: UNDIP is Indeed a Stronghold of Pancasila 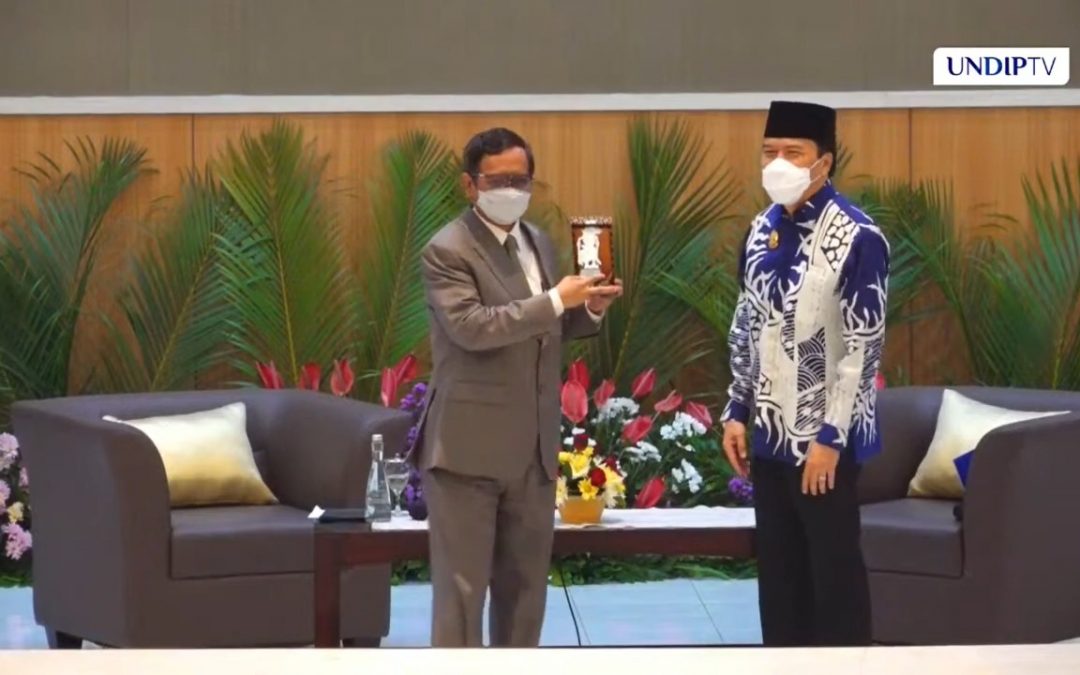 Semarang-Central Java (21/10). Coordinating Minister for Political, Legal and Security Affairs, Prof. Dr. Mahfud MD, S.H., S.U., M.I.P, admitted that he knew exactly that Diponegoro University (Undip) was indeed a stronghold of Pancasila, because since 2000 he has been actively involved in the Undip Campus as a lecturer in the Doctoral Program in Law.

“When Undip Rector, Prof. Yos Johan, said that Undip is a stronghold of Pancasila that does not give space to those who are intolerant to the Indonesian philosophy, is true,” said Prof. Mahmud MD at the Gathering with the Academic Senate, Undip’s Board of Professors and Regional Leader Coordinating Forum (Forkompimda) of Central Java, at the Prof. Soedarto Building, on Thursday (21/10/2021).

Therefore, in his series of activities at Undip, he did not want to give lectures on Pancasila, but chose to strengthen his friendship.

In opening the event, the Coordinating Minister for Political, Legal and Security Affairs said that the Pancasila ideology was the final resolution because it had undergone various processes and challenges at various moments. When discussed by BPUPKI, Pancasila was agreed as the basis of the state. The opportunity to change the constitution through elections and open space for political parties happened in the era when BJ Habibie became President, and it was concluded that the residents continued to support Pancasila. Revolts such as the G30S PKI and NII also failed to change the ideology of Pancasila.

However there is a strange phenomenon, when the President in Indonesia can fall because he is considered unable to implement Pancasila. All periods of government were also accused of not implementing Pancasila well. “What is the problem? Implementation,” he said, at the event moderated directly by the Undip Rector, Prof. Dr. Yos Johan Utama, S.H., M. Hum.

Therefore, the Minister invited universities as institutions which produce intellectuals to jointly study and find answers on implementation of Pancasila in a way that is relevant to the conditions.

Some concepts that need to be strengthened include restorative justice in the settlement of criminal cases. Local wisdom can also be a consideration in determining justice.

To be sure, Mahfud emphasized that the government must be open to criticism and they should not face criticism with repressive measures. However, it must be understood that criticism of the government can also be answered with criticism if what is being said is not supported by valid data. Thus, he said, careless criticism cannot be allowed because it can be misleading.

Regarding important issues nowadays, among them are the land mafia, several articles in the Electronic Information and Transactions Law (ITE), as well as issues related to BLBI (Bank Indonesia Liquidity Assistance) which until now continue to emerge.

Mahfud considered these problems as problems from the past that must be resolved without blaming each other.

The current government continues to solve it, but it cannot be finished immediately. In the case of the land mafia, it is acknowledged that a lot of government land is controlled by individuals and corporations, but the handover is legal in a civil manner, so it should not be handled rashly. The BLBI problem is also not easy to solve because the law on asset confiscation does not yet exist. “In implementing democracy we must be patient,” he reminded.

However, he is optimistic that towards Golden Indonesia 2045, the country of Indonesia will become a big country along with China, the United States, India and Japan. This prediction is reinforced by various studies, not only by national institutions, but also by international institutions such as McKinsey&Company and PricewaterhouseCoopers. Justice and prosperity will ultimately be achieved in Golden Indonesia 2045 as long as the stages of the process, namely Independence, Unity, and Sovereignty, can be carried out properly.

Previously, Prof. Dr. Yos Johan Utama, S.H., M. Hum. said that one of the indicators of the implementation of Pancasila is prosperity. Therefore, Undip prioritizes for its community including the students. “Based on the ideology of Pancasila, give rights to those who are entitled. Don’t reduce others’ rights and don’t do business by putting pressure on other people,” he said.

That is the way Undip implemented Pancasila under his leadership. He emphasized that Undip is not only a stronghold of Pancasila, but also the “bull” of Pancasila. Therefore, there is no room for those who reject Pancasila and the Republic of Indonesia on this campus. (PR team)