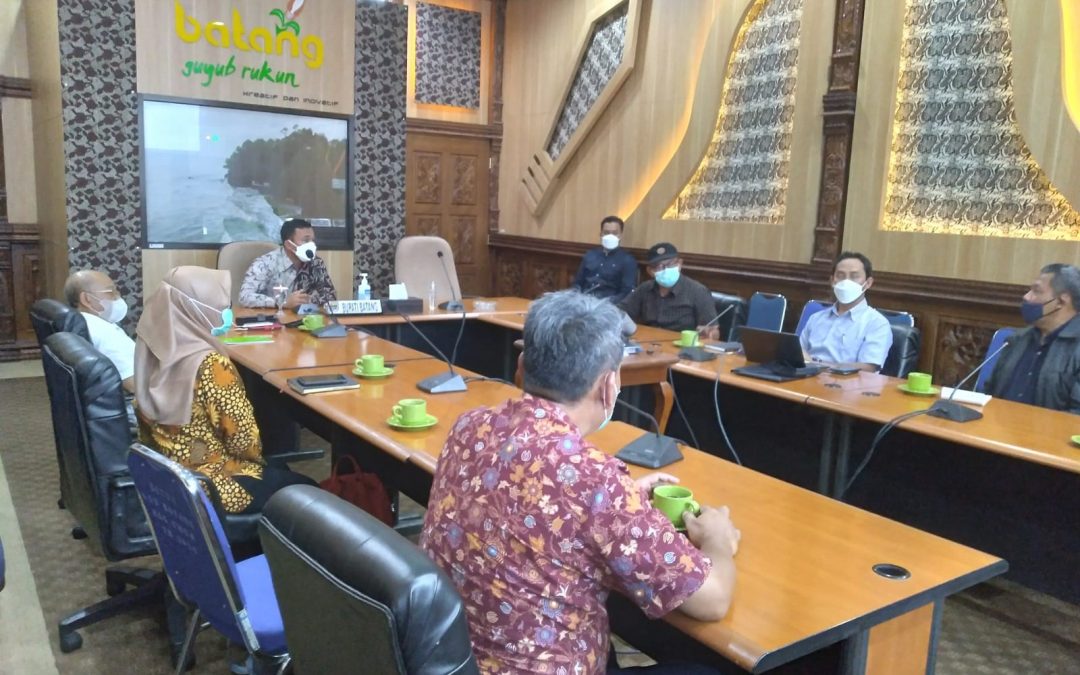 UNDIP or Diponegoro University has several Study Programs Outside the Main Campus (PSDKU) spread over 3 regencies, namely Batang, Pekalongan, and Rembang Regencies. There are 2 study programs currently at Undip Batang campus, namely the Diploma III Tax Accounting Study Program and the Diploma III Public Relations Study Program. As a form of UNDIP’s commitment to the contribution of human development in Batang Regency, regular meetings are held to discuss performance achievements and the focus of future work plans. With the absorption of the aspirations of stakeholders, it is hoped that the development of UNDIP PSDKU in various regions can be accelerated and in line with regional needs.

UNDIP PSDKU and the Batang Regency Government held a meeting to coordinate the achievements and results of the Tri Dharma of higher education on Thursday, October 21 2021. The meeting which was held at the Batang Government Office was attended by the Regent of Batang, Dr. H. Wihaji, S.Ag., M.Pd.; Head of the UNDIP PSDKU Management Institute, Dr. Redyanto Noor, M. Hum.; and several UNDIP PSDKU lecturers.

The meeting between UNDIP representatives and the Regent of Batang was filled with presentations on the achievements of the Tri Dharma of Higher Education which was held for 2 to 3 years by UNDIP PSDKU lecturers and staff. Dr. Wihaji appreciated the achievement of the UNDIP PSDKU performance in Batang. In addition, he also expressed his support for several aspects of future work plans. The Batang government will support the implementation of scholarships for PSDKU Batang students, data collection on the needs of each sub-district in Batang Regency, construction of the UNDIP Batang flats, addition of study programs, and support for events that introduce UNDIP PSDKU Batang to high school students in Batang Regency.

After the event, several study programs at PSDKU Batang immediately responded to the results of the meeting, one of which was the Diploma III Tax Accounting Study Program. Student advisory lecturer, Ropinov Saputro, S.E., M.M. immediately coordinated with the Study Program Student Association so that they can collaborate with lecturers to meet the Batang Regent’s proposal, especially regarding data collection for the needs of all Batang sub-districts and the introduction of UNDIP PSDKU Batang to high school students in Batang Regency. Ropinov said that the task of collecting data on the needs of all Batang sub-districts was not a difficult task to do.

Ropinov Saputro, S.E., M.M. said that several student association administrators have had experience in population data collection by becoming a partner of the Statistics Indonesia (BPS) in 2020. Likewise with the introduction of UNDIP PSDKU to high school students in Batang Regency, which according to him can be carried out through seminars and webinars according to the needs of the students. In a seminar, in addition to the material presented by the resource person, of course there is information on the introduction of the campus/study program along with the achievements of the study program/studentship that have been achieved. Ropinov stated that Student Association of Diploma III Tax Accounting in Batang campus was used to conducting seminars/webinars, even by cooperating with several external sponsors and regional influencers. They are also accustomed to publishing every activity in various media in order to build the image of the study program in the eyes of the public, which greatly influences the positive decisions of the community/prospective students when choosing the Diploma III Tax Accounting study program in Batang Campus.