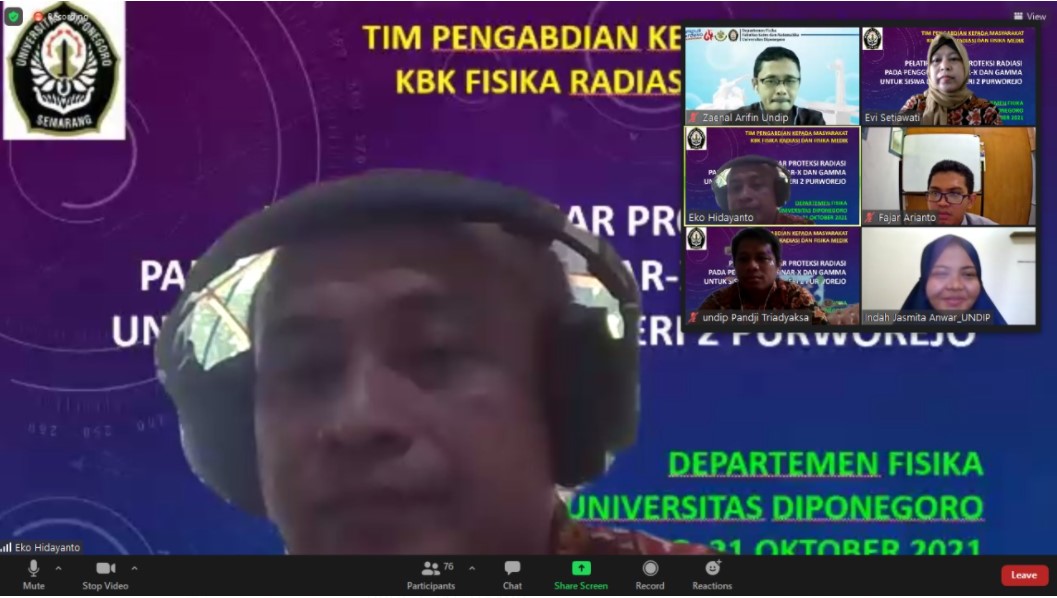 Daily life cannot be separated from radiation, be it radiation that comes from nature or man-made radiation that is used in the fields of technology, industry, health, communication, food, and so on. Radiation will bring the best benefits for human welfare if it is used properly and follows the established rules. However, if radiation is misused and heed the principles of radiation protection and safety, then radiation can be a disaster for humans.

Radiation is the process of transferring energy through media or space in the form of electromagnetic waves. There is radiation that is harmless because its energy is small and cannot penetrate a medium or its penetrating power is small (such as alpha and beta rays), there is also radiation that is dangerous because of its high energy and is able to penetrate the media even if the media is thick such as human body or thick walls (e.g. X-rays and gamma rays). To protect a person from the effects of radiation, especially the harmful ionizing radiation, it is necessary to have a safety program known as radiation protection.

In order to provide initial insight and information about the dangers of radiation and its protection, the Radiation Physics and Medical Physics Expertise Group from the Department of Physics, Faculty of Science and Mathematics UNDIP,  held a “Basic Training of Radiation Protection on the Use of X-Rays and Gamma to Students at SMA Negeri 2 Purworejo” online via Zoom Meeting on Thursday (21/10).

The event was opened by Dr. eng. Eko Hidayanto as the chief executive of this Community Service by introducing the Physics study program in general and the Radiation Physics and Medical Physics Expertise Group. He also explained the activities based on the Tri Dharma of Higher Education in terms of education, research and community service that have been and continue to be developed by Department of Physics Undip. On this occasion, Eko Hidayanto also shared the achievements of Department of Physics Undip with various achievements both at national and international levels.

Then the event continued with a material presentation by Pandji Triadyaksa, M.Sc. which described the radiation protection system. In the use of radiation, to ensure safety of radiation officers, patients (people who are subject to radiation) and other people around them, it is necessary to pay attention to the philosophical principles in the use of radiation. The first is that the use of radiation must provide more benefits than disadvantages (justification principle). Second, if you have to use radiation then use it with the lowest possible dose (optimization principle). Third, there needs to be a dose limit that must be accepted (limitation). In terms of radiation protection, there are 3 things that must be considered, namely the time factor, by minimizing the time as little as possible when you have to be exposed to radiation; the distance factor, by making the distance as far as possible from the radiation/source; and the shielding factor by using the right shield for certain types of radiation, for example with lead (Pb) coated materials which are good radiation absorbents.

The next material was delivered by Evi Setiawati, M.Sc. about the possible biological effects on the body when exposed to ionizing radiation. The effects can occur acutely or immediately after receiving radiation or the effects can be delayed from days to years after exposure to radiation. The effects of radiation can also be seen from the types of cells, namely somatic cells and genetic cells. Meanwhile, for the purposes of radiation protection, the effects of radiation can be divided into deterministic effects and stochastic effects. The deterministic effects will occur if the dose given exceeds the threshold dose, and will get worse as the dose increases. While the stochastic effects happen randomly.

The last material was presented by Zaenal Arifin, M.Sc. about radiation measurements to monitor how much radiation levels are emitted from both beta, gamma and X-ray radiation. A radiation can be identified and its quantity measured using a measuring instrument called a radiation detector. The types of radiation detectors commonly used are gas-filled detectors, scintillation detectors and solid material detectors (usually from semiconductor materials). The use of radiation measuring systems is commonly used for radiation protection activities and for nuclear radiation application/research activities. Measuring instruments for radiation protection are divided into three types, namely individual dosimeters, survey meters, and contamination monitors. Meanwhile, for research in the laboratory, a counting system and spectroscopy are usually used.

After the presentation of the material, there was a discussion with the students of SMA Negeri 2 Purworejo. Participants were quite enthusiastic and eager to ask questions about the material presented by the speakers. On that occasion the presenters also gave several questions that the students could answer correctly, then the students who asked and answered the questions were given prizes in the form of internet data packages. This event was attended online by around 130 students and teachers of SMA Negeri 2 Purworejo. (PR team)